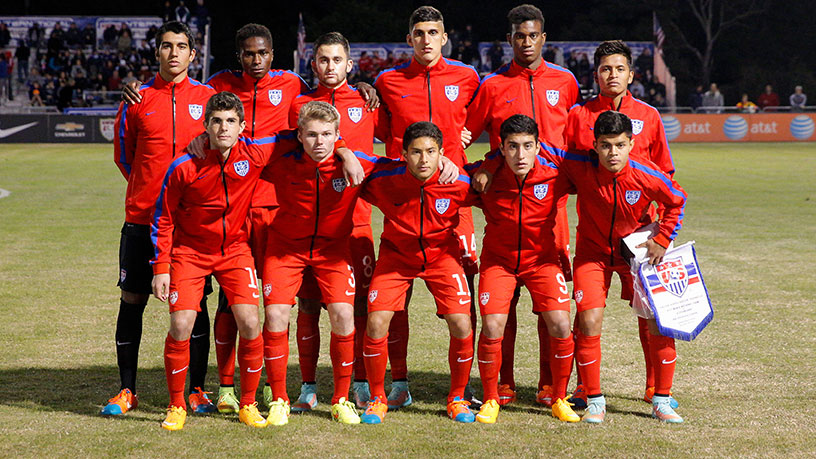 In late December, United States men’s national team supporters fell all over themselves with excitement when then-17-year-old Arsenal project Gedion Zelalem pledged his allegiance to the red, white, and blue. But I’ve been thinking more about another American teenager.

Haji Wright is three months younger than Zelalem, fresh off a 2014 that saw him tally 18 goals and seven assists in 22 matches for the U.S. U-17 squad. He’s the latest can’t-miss prospect and played a key role in the recent Nike Friendlies, a yearly tournament during which the stars of the future routinely announce themselves. Read enough stories about Wright and you become familiar with glowing passages like this one from America’s 4-1 loss to Brazil: “Haji Wright tracked down the loose ball and beat two defenders with a bit of individual brilliance. Wright then played in [Borussia Dortmund’s Christian] Pulisic for the easy finish.”

His coaches agree. “He’s tall,” U-17 coach Richie Williams told me from Honduras where he was with the squad preparing for February’s World Cup qualifying tournament.1 “He’s athletic. He can run. He’s strong on the ball. He can use both feet. Technically, he’s very good. He has a great ability to run at players. He can score goals or set up goals.” Williams says Wright is flexible enough to play both on the wing in the team’s 4-3-3 system, a spot that allows him to attack players one-on-one, or as the target forward.

Peter Vagenas, director of the L.A. Galaxy Academy where Wright has been playing, echoes the U-17 coach. “For his age, he has a pretty high level combination of technique and athleticism. He’s a player that obviously exudes a lot of confidence,” he says. “If Haji puts himself in the right day-to-day environment and situation, I think he has a very good chance to [debut with the senior team when he’s 19 or 20 and be an impact player].”

While this might sound like tepid or, at least, overly cautious praise — it is — there’s a tendency among coaches to downplay a teenager’s potential, an attempt to counterbalance the rabid excitement of the U.S. fan base and — yes — the media. It started with Freddy Adu, hope heaped on the shoulders of a 13-year-old phenom, and extended through a long list of names: Danny Szetela, Brek Shea, Jozy Altidore, Luis Gil, Landon Donovan, John O’Brien, Santino Quaranta, Juan Agudelo, and Bobby Convey. Some succeeded, some didn’t. But all had qualities that excited scouts, coaches, and fans. “Like most promising young talents, it’s easy to recognize the potential,” Vagenas said. “You can easily see that in Haji.”

Rumors have Wright training with Bundesliga and Champions League staple Schalke, ready to sign with Jermaine Jones’s old squad as soon as he turns 18. No one seems to be entirely sure of this fact because the rules about underage players and clubs are opaque at best, but it’s more likely true than not — and even if it’s not, Wright will almost certainly end up signing with a well-regarded squad in Europe, where he will, in theory, continue to develop. If Wright reaches his potential, he could help the U.S. program shed its reputation for struggling to develop players.

The modern era started out OK. The 1999 team — the first group that came out of the U-17 Residency Program in Bradenton, the most serious development initiative to that point and one that continues to exist despite its detractors — featured a couple of guys you might know. The outfit finished fourth at the U-17 World Cup, still its best showing ever, with Donovan winning the Golden Ball as the tournament’s best player and Convey, DaMarcus Beasley, Kyle Beckerman, and Oguchi Onyewu all lining up next to him. Those five would go on to earn caps with the senior side, and four of them played key roles in big tournaments more than a decade into the future. That’s good! If every U-17 team could even approach that depth, we’d be talking about an impressive level of success. Unfortunately, we’re not. Here’s a complete list of guys who appeared in one of the five U-17 World Cups during the first decade of the 21st century and then on the senior team:

In total, just 13 out of the 100 players went on to win a cap with the full national team.3 And many of those players — most of them, in fact — never made significant contributions to the USMNT. That’s not great!

But then I started looking around at other countries. Most nations have a similar sub-Mendoza batting average with U17-to-senior-team success. It’s rare for five players from the same U-17 World Cup squad to reach the senior team. Two or three is much closer to the standard number, even for the best teams in the world with the strongest youth-development programs. It would appear that 16 or 17 years old is simply too young to make any meaningful predictions about a player’s future. A list of the U-17 Golden Ball winners further proves this point. In order, from 1999 to 2013: Landon Donovan, Florent Sinama Pongolle, Cesc Fàbregas, Anderson, Toni Kroos, Sani Emmanuel, Julio Gómez, Kelechi Iheanacho. Some hits, some misses.

In terms of sheer numbers, the American system hasn’t been that far behind the strongest countries in the world. If anything, more U.S. U-17ers end up with the senior squad, which might be a reflection of the lack of depth at the age level. There are fewer good 17-year-olds in the U.S. than, say, Spain, which means there are fewer 17-year-olds who didn’t make the World Cup roster who could conceivably improve more than their World Cup peers. Where the U.S. does lack, however, is quality. Here’s a brief look at some of the players from four countries who appeared in the U-17s:

Compare that with the players from the U.S., and you start to see the issue. Brazil, Germany, Mexico, and Spain all had front-line starters come through their U-17 program and make an impact at the World Cup. The Americans, not so much. The red, white, and blue have never produced a world-class player from the youth ranks.4 But as the team has shown at the Nike Friendlies or at World Cups past, it’s not far behind the likes of Brazil and Germany at the U-17 level. So it’s hard not to wonder what might happen to these kids were they wearing Spain jerseys and not the U.S. crest. Maybe Wright will change that, but odds are he won’t. Even for the best countries in the world, developing teenagers is an art, not a science — some combination of skill, mental fortitude, and luck. The U.S. has largely fared worse than we should expect.

That needs to start changing soon. And there’s hope that it is, slowly, with a renewed focus on the U.S. Development Academy and more players going to Europe where training is still better. Williams says somewhere between 10 and 14 of the players on his World Cup roster will sign professional contracts, a dramatic improvement from a decade or two ago. “[Development is ahead of where it was by] leaps and bounds,” said Vagenas, who had six appearances with the U.S. U-23 squad and three with the national team. “It’s not even recognizable at this point compared to what it was.”

For U.S. Soccer, that couldn’t come fast enough. Because here’s the truth: If you’re relying on your U-17 to show the strength of your future senior national team, you’re a fool. But if you’re not producing a couple of key cogs with each cycle, you’re falling behind.