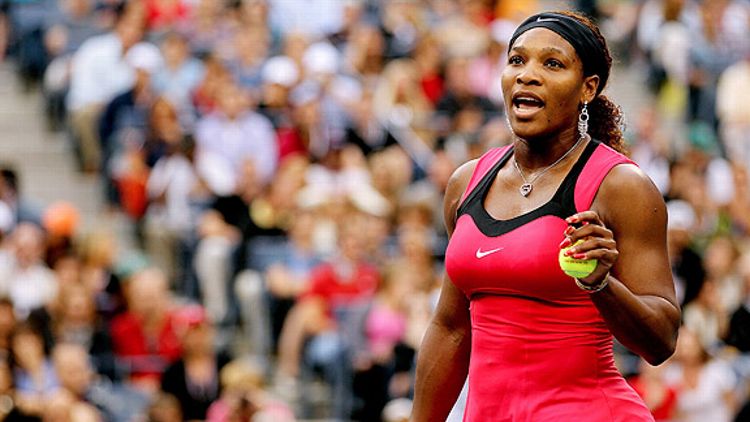 In her fourth round match, Samantha Stosur played the longest tiebreak in women’s Grand Slam history, a 30-point back-and-forth against Maria Kirilenko. This was after she was part of the longest women’s U.S. Open match: a three-hour, 16-minute battle of wills against Nadia Petrova in the third round. But she only needed two sets and 83 minutes in the US Open women’s finals to knock off Serena Williams, who had been such a heavy favorite that her semifinals match against no. 1 seed Caroline Wozniacki on Saturday had been promoted as if it were the finals.

Stosur’s semifinal match against Angelique Kerber, on the other hand, was so under the radar that viewers would be forgiven for believing that it never occurred at all. Due to rain delays that greatly condensed the playing schedule near the end of the Open’s second week, the Stosur-Kerber match took place on a smaller court, the Grandstand, and was barely televised. When Stosur entered Arthur Ashe Stadium on Sunday to face fearsome Serena Williams in the finals, it was her first time on the marquee court this entire tournament.

And so it was ultimately a tiny bit fitting that, even after such a dominant victory, Stosur was overshadowed by her opponent. After being run all around the court in the opening set and falling 6-2, Williams began the second set with vigor, screaming self-encouragingly “COME ON!” after hitting the ball particularly well. The only problem was that it wasn’t actually a winning shot: Stosur managed to get her racquet on the ball, causing chair umpire Eva Asderaki to rule that Serena was guilty of “intentional hindrance” with her yell. Stosur was awarded the point, giving her the 1-0 break.

That’s when Serena lost it. Over the next few minutes she said all of the below to the stricken ump, much of it punctuated with a pointed racquet:

When the match ended with Stosur winning 6-2, 6-3, Serena warmly hugged her, but refused to shake hands with Asderaki. The scene was highly reminiscent of Serena’s last appearance in the U.S. Open, in 2009, when she berated a line judge (“I swear to God, I feel like taking this ball and shoving it down your fucking throat,”) and was docked a (match) point. (Her two-year probation for the outburst only just ended.) And just as she began this year’s U.S. Open by blithely blowing off questions about her on-court demeanor toward tournament officials, she finished it that way too.

“I think everyone is so intense out there. I was really intense, and everyone just wants to do great. I know I did. Um, yeah, just try my best, you know? It’s like giving it 100 percent,” she said when asked if her behavior was “fair to the official,” her laconic postage demeanor in stark contrast to her wild-eyed behavior on the court. (She would later tweet: “Karaoke for life.”) Asked if she regretted anything she said or did, she replied, “I regret losing, but I think there was nothing I could do today.” At one point she giggled vacantly and informed the room that her hair was dripping wet.

I love Serena Williams. The mercurial player is without a doubt the biggest star in women’s tennis, and on a good day she’s also the best. (This is my favorite assessment of her play and stature in the game.) But in a sport where decorum is cherished and every rogue eyeroll is rendered in crisp HD, she is fast becoming the public face of petulance. And while some of the horrified pearl-clutching from analysts and fans can devolve into near-parody, the fact remains that for the second straight time at the U.S. Open, she has felt entitled to intimidate not her opponent but a court official. And for the second straight time at the US Open, it has helped her to lose. I love my athletes a little bit diva, and a little unhinged. But Serena has begun to trend toward being outright disrespectful, and it’s unbecoming of an athlete of her skill.

If Serena Williams was bratty on the court but emotionless off, her fellow fallen star, Roger Federer, was the opposite. Federer remained stone-faced and stoic as he squandered double match points to Novak Djokovic, but in the interview room his genteel demeanor unraveled ever-so-slightly — in much the same way that his game has of late.

Asked about whether Djokovic’s blistering forehand service return to save the first match point was a function of confidence, Federer practically scoffed. “Confidence? Are you kidding me?” He continued:

“Look, some players grow up and play like that … It all goes in for some reason, because that’s the kind of way they grew up playing when they were down. I never played that way. I believe in hard work’s gonna pay off kinda thing, because early on maybe I didn’t always work at my hardest. So for me, this is very hard to understand how can you play a shot like that on match point. But, look, maybe he’s been doing it for 20 years, so for him it was very normal. You’ve got to ask him.”

Comparing Djokovic’s return to a childhood slap was slightly off-putting, though it’s a fool’s errand to try to parse the true meaning behind words spoken at a press conference by an exhausted and defeated athlete. Federer’s response underlined the difference between his measured play and Djokovic’s go-for-broke style. It also spoke to the ephemeral and unexplainable nature of tennis glory.

Federer was once so unbeatable that people complained about the monotony of his rule. Before this year’s Wimbledon he was 178-0 in Grand Slam matches when up two sets to love. He’s now 182-2. It’s still a ridiculous statistic, and yet those two losses have come at awful, high-stakes times: first against Jo-Wilfried Tsonga at Wimbledon and now against Djokovic in an eerie repeat of the U.S. Open semis in 2009, when he also blew a double match point. (This time was even worse, though, because he was the one serving.)

After the Djokovic-Federer match, the second men’s semifinal was basically a buzzkill, unless you’re titillated by the sight of Andy Murray’s tortured psyche on display. Murray had looked impressive throughout the tournament, but fell behind quickly to Nadal and never could recover.

The last time Rafael Nadal defeated Novak Djokovic was a full year ago, in the finals of the US Open. Since then, Djokovic has defeated the Spaniard in five straight matches — all of them tournament finals — and made his mark as the only player in tennis who has truly been able to wriggle inside Nadal’s head. (When you beat him twice on his beloved clay, that happens.) It has been part of Djokovic’s unbelievable season, in which he is 63-2 and has won the Australian Open and Wimbledon.

“I am not very happy about my mental performance against him this year,” Nadal said of Djokovic. “That’s big problem. Because when that’s happening, you have your chances less, much less than if you believe.”

In his recent autobiography, Nadal wrote that “with Djokovic, there is no clear tactical plan. It is simply a question of playing at your very best, with maximum intensity and aggression.” Asked more recently what he planned to do to defeat him, Nadal deadpanned: “I think I gonna serve and volley.”

He was only joking — Nadal has built his career on a groundstroke game — but maybe there’s something to that plan. It’s not like anything else has worked for him against Djokovic this year.