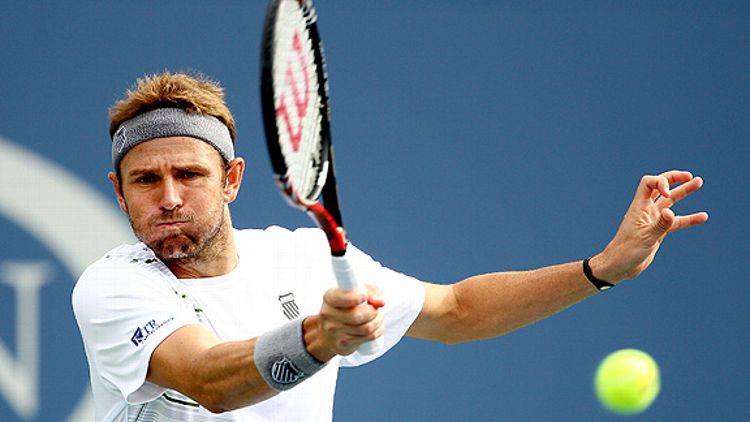 The Tuesday after Labor Day might actually be the worst Monday of all, marking as it does the end of summer, the start of school, the first day back from vacation. And for anyone who had Labor Day tickets to the night session at the U.S. Open, it must feel extra rough: Play stretched well past everyone’s bedtimes, with Roger Federer and Juan Monaco not walking off the Arthur Ashe Stadium court until after 1 a.m. on the ultimate school night.

But Federer and Monaco weren’t to blame; the Swede’s Federer’s 6-1, 6-2, 6-0 victory clocked a crisp and efficient 74 minutes. (You got the sense the man wanted nothing more than to crawl into bed.) The real culprit was a highly anticipated Round of 16 daytime match between no. 8 Mardy Fish and no. 11 Jo-Wilfried Tsonga that turned into a 3-hour-and-45-minute-long momentum-swinging marathon.

Amidst swirling winds that could carry shots long or curl balls juuuust inbounds, Fish and Tsonga, who between them had yet to lose a set in this U.S. Open, dropped two apiece. Tsonga won the first set 6-4 and looked on pace to win the second until Fish’s serve and volley game — something of a relic in the current groundstroke-heavy men’s environment — came alive to exhilarating effect. With his cheeks puffing out like a blowfish, Fish dove for volleys and leaped for overheads, winning the second set in a tiebreaker and cruising to win the third. But the exertion took a visible toll on Fish, and by the fifth set, Tsonga had reemerged.

Tsonga, a broad-shouldered, baby-faced type whose on-court expressions look like those of a toddler, or a puppy — after losing one point, he gnawed on a tennis ball — is a very tough player to root against. But that didn’t make it any easier to watch Mardy Fish slip away. As the hours wore on, Fish looked increasingly worn, and the match, so thrilling through four sets and change, began to sound a death rattle. With Tsonga breaking serve early in the fifth set, tempers darkened over stadium noise and language barriers. TV cameras picked up snippets of a painful exchange. (“I don’t speak French, dumbass,” Fish said to the chair umpire in frustration, to which a confused Tsonga responded: “I don’t like you too.”) Fish, hobbled by sore legs and no longer rushing the net, ultimately did little more in the fifth than misfire ball after ball into it.

And with his 6-4, 6-7 (5), 3-6, 6-4, 6-2 win over Fish, Tsonga will play Roger Federer in the quarterfinals. Tsonga has plenty of experience against Federer: At Wimbledon, Tsonga became the first player to come back from two sets down against the Swede him in a Grand Slam to win, and earlier this August he defeated Federer in the third round of the Rogers Cup.

WOZNIACKI DOES NOT GO GENTLY INTO THAT GOOD NIGHT
Prolonging the already late night for Arthur Ashe ticket holders was no. 1 Caroline Wozniacki, whose three-set comeback win over 2004 U.S. Open champion Svetlana Kuznetsova took over three hours to complete. (Federer would not take the court until ten minutes till midnight.) It initially appeared as though the two women were going to be finished much earlier: Kuznetsova, dressed in a throwbacky tennis dress that recalled Steffi Graf, won the first set in a tiebreak and was up 4-1 in the second. For Wozniacki, a loss would have been one more disappointment in a year full of them, one more data point for her many critics to use against her in decrying the WTA’s ranking system, which has her as world no. 1 despite the fact that she’s yet to win a major and has not exactly been the favorite at the U.S. Open. Her relationship with Rory McIlroy has earned her more headlines than her tennis this summer — even the Williams sisters have weighed in with advice.

Instead, Wozniacki fought back, winning the second set 7-5 before running away 6-1 in a third set that showed off her conditioning. As Kuznetsova sweated, wheezed, and doubled over late in the match, Wozniacki barely looked tested. “She could go two more!” exclaimed analyst Chris Evert. The top seed will play no. 10 Andrea Petkovic on Wednesday, the same day that Serena Williams — who is expected to win the tournament as the No. 28 seed, a problem exactly the opposite of Wozniacki’s — plays the self-described “excessive aggressive” Anastasia Pavlyuchenkova.

FROM IGNORED TO ADORED
Mardy Fish had been one of four American men who advanced to the Round of 16, with no. 21 Andy Roddick, no. 28 John Isner, and unseeded Donald Young all scheduled to play Tuesday for a chance to advance to the quarterfinals. Like Fish, Isner will take on a Frenchman, no. 12 Gilles Simon, who is seeking to become the first Gallic player to win a Grand Slam since Yannick Noah, father of Joakim, won the 1983 French Open. (Speaking of the French, by the way, Richard Gasquet’s Thursday loss to Ivo Karlovic was the first match this tournament to make me storm out of the room in frustration.)

Isner aside, most of the young Americans who entered the weekend with hype and hope on their side didn’t live to see Labor Day: Christina McHale, Sloane Stephens, Irina Falconi, Vania King, and Jack Sock were all dunzo by Saturday. But one young talent only got better and better as the weekend went on. If it seems that Donald Young has been around for longer than his 22 years would suggest, that’s because he got such an early start, turning pro at only 14. But in recent years Young has gone from phenom to disappointment to potential lost cause: A show of Twitter frustration in April drew a strong and stern response from Patrick McEnroe on behalf of the USTA. (Young later apologized, and for my part, I wish more stories ended with this final sentence.)

On Friday, however, he played one of the finest matches of his question-marked career and won his first five-setter, defeating no. 14 Stanislas Wawrinka in a 7-6 (7), 3-6, 2-6, 6-3, 7-6 (1) thriller that lasted over four hours. And with that, a player who was practically begging for fans at the start of this tournament suddenly became one of its darlings. On Sunday, he won in less hectic fashion, beating Juan Ignacio Chela in straight sets to set himself up for a Round of 16 date with his toughest opponent yet: a scary-confident no. 4 seed Andy Murray.

WILD CARD WEEKEND
Young is one of three unseeded players remaining in the singles tournament. On the men’s side, Gilles Muller will play Rafael Nadal, who survived a first-set tiebreak and defeated David Nalbandian 7-6 (5), 6-1, 7-5 on Sunday before causing a stir and a scare during his press conference. In the midst of answering questions from Spanish-speaking reporters, Nadal stopped, grimaced, and leaned back in his chair with a massive cramp in his leg. (The resulting video is half inside-look-at-the-pain-a-professional-athlete-endures on the regular, and half borderline-porny.)

On the women’s side, unseeded Angelique Kerber, who lost in the first rounds of the other three Grand Slam tournaments in 2011, has quietly made her way all the way to the quarterfinals. (Her biggest upset was of no. 12 Agnieszka Radwanska.) She will next play Flavia Pennetta, an intriguing player who knocked off a poor-serving Maria Sharapova 6-3, 3-6, 6-4 on Friday and toughed out a 6-4, 7-6 (6) win over no. 13 Peng Shuai on Sunday in a tilt that included Pennetta explaining to the chair umpire “estoy vomitando” before rattling off six straight points.

“I LOST TRACK OF THE SCORE”
In their Round of 16 match on Sunday, Sam Stosur and Maria Kirilenko played a second set tiebreak that lasted for 32 points, the longest-ever in a Grand Slam women’s singles match. Kirilenko successfully defended five different match points during the slog, with help from three successful Hawk Eye challenges, and won the tiebreak to send the match to three sets. Stosur, whose previous match against Nadia Petrova lasted over three hours and was the longest women’s singles match in the U.S. Open’s modern era, hung on to win 6-3 in the third and advance to the quarterfinals.

“I lost track of the score,” said Stosur, who will next play Vena Zvonereva, a no. 2 seed who has still managed to fly under the radar. “I didn’t know at one point if I was serving, receiving, or changing ends, what was going on. With all the challenges it was super exciting.”

On Monday, another epic tiebreak broke out, this time in the opening set of the men’s Round of 16 match between top seed Novak Djokovic and Alexandr Dolgopolov, a wild Ukrainian player whose serve and strokes resemble, in mechanics and in explosiveness, a mousetrap snapping shut. Dolgopolov won the first four points of the tiebreak before Djokovic rallied back, and the pair played 30 points before Djokovic finally took the tiebreak 16-14 and went on to win the match. The world no. 1 will play fellow Serbian countryman Janko Tipsarevic in the quarterfinals, the first time two Serbians have reached the quarterfinals of a Grand Slam. (Last December, the small country edged out France to win the Davis Cup.)

ARTHUR ASHE ROUNDUP
After a first week of gorgeous and glorious tennis weather at Flushing Meadows, the next few days are not promising for players hoping to retain the nicely spaced, rest-heavy schedule. Forecasts of probable rain could end up compressing playing schedules near the end of the week and eliminating days off. (To fill all the dead air time tomorrow, you might consider brushing up on the awkward truths about Arthur Ashe Stadium that Sports Illustrated’s Jon Wertheim outlined last year.)

Andy Roddick, who kicked off his U.S. Open appearance with his trademark outspoken grumpiness, softened a bit over the weekend. “I think this year, more than any, I’ve looked around a couple times in the stadium and just realized how cool it really is, how special it is,” he said after defeating Julien Benneteau in straight sets on Sunday. It makes sense that he might be so nostalgic about the U.S. Open crowd: Roddick mused that since 2002 he has not played a U.S. Open match outside of Arthur Ashe Stadium, a streak of 37 games. (He won the tournament, his lone major, in 2003.) His next match is against the diminutive no. 5 David Ferrer, who defeated James Blake and Florian Mayer over the weekend to advance to the Round of 16.

In other Arthur Ashe probably-will-get-rescheduled-anyway news, the young mixed doubles wild card entry of Melanie Oudin and Jack Sock, who knocked off the no. 1 seed defending champions Liezel Huber and Bob Bryan, are scheduled to play No. 7 seeds Elena Vesnina and Leander Paes in Arthur Ashe Stadium following Roddick’s Tuesday match. Hopefully the kids won’t keep you up too late this time.