Two Roads Diverged in a Tanking Wood: Kyrie, Boogie, and the Different Paths to Rebuilding 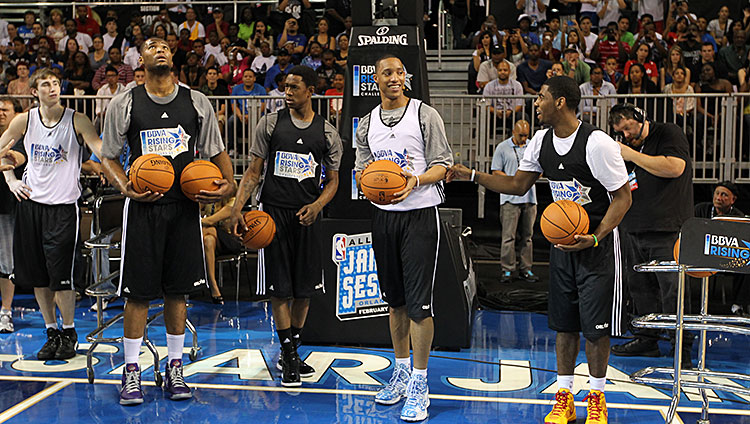 To make the turnaround from league doormat to conference powerhouse, the Oklahoma City Thunder succeeded by taking the most counterintuitive of approaches. The team was willing to commit to an extended stretch of futility to secure consecutive lottery picks. This plan worked, to say the least: OKC (then still the Seattle SuperSonics) drafted a transcendent talent in Kevin Durant. He was joined by James Harden and Russell Westbrook. From that foundation, the Thunder built a team that has been contending for the title for the last three years.

Due to the Thunder’s success, rebuilding franchises across the league have adopted similar templates. Instead of angling for just one elite talent through the draft, teams in lottery land are extending their stay, hoping to nab a second star. But in the process, they expose themselves to a deadly disease that eats away at every aspect of their organization: losing.

Often overlooked in the nebulous concept of development is how a constant stream of losses affect an emerging young player’s ability to realize his potential. In general, the growth of a young player is affected by the environment around him. In the NBA, a player’s first few seasons can be his most formative. Simply put, winning creates a breeding ground for good habits (the stuff we praise guys like Shane Battier and Nick Collison for), while losing has the opposite effect. The Thunder lucked out by nabbing Harden and Westbrook to go along with Durant, but there are teams that suffer a far different fate after securing a franchise-altering talent.

A Study in Styles

Cleveland and Sacramento have taken different approaches to building around foundational talents in recent years, despite being in similar situations.

Rebuilding after LeBron James, the Cavs landed Kyrie Irving in 2011. Irving played brilliantly during his lockout-shortened debut season. Posting a 21.49 PER while shooting 46.9 percent from the floor and 39.9 percent from 3, Irving immediately showed himself as an elite offensive force in the making. With a productive, veteran frontcourt player in Anderson Varejao already on the roster, the Cavs went into the summer of 2012 with two scenarios: continue down the rebuilding path and try to use their lottery pick to nab another star, or trade the pick (along with perhaps other future assets) to create a supporting cast of established veterans. The team, as we all know, chose the former option. A couple of years later, Zach Lowe wrote a farewell to the GM behind that plan, Chris Grant.

The Kings snagged mercurial big man DeMarcus Cousins in 2010. By the end of Cousins’s rookie deal, Sacramento’s new ownership had the same option as Cleveland: go for lottery picks or try to get competitive as quickly as possible. The Rudy Gay trade signaled the Kings’ intentions.

The team’s acquisition of Gay wasn’t a delusional, desperate ploy. It was a calculated gamble to create an environment where games would start to matter again in Sacramento. When Gay arrived, the team’s scoring margin this season was minus-3.3, about standard for a franchise headed to the lottery. From December 13 on, when Gay played his first game for the Kings, the team’s scoring margin has been nearly half that, at minus-1.8 — a number that doesn’t factor in recent extended absences from both Gay and Cousins due to injury and illness.

When he was leading a hapless team into battle every night, Cousins had no outside incentive to work on seemingly inconsequential things. Winning is in the details, and losing encourages players to ignore those details. Watch Cousins in the bad old days and you see a kid staying in a stance in pick-and-roll defense, or not getting back quickly in transition. Since Gay arrived, Sacramento has notched two wins over Houston, along with other surprising victories against Portland and Miami. The team looks like it’s on the way to creating a positive environment that will give Cousins a better chance to maximize his immense potential.

In Sunday night’s game in Washington, Marcus Thornton drew Cousins’s wrath for failing to “tag” the roll man from weakside on two possessions in the first half. (“Tag” is basketball jargon that means slowing/identifying/interfering with a player cutting through the defense). On the surface, it may seem purely like another example of the big man’s temper getting the best of him. But what it also demonstrates is a player passionate enough about winning that he keeps his teammates accountable when their mental mistakes hinder the team.

It’s difficult to figure out exactly how many losses it takes before young players (especially ones already prone to bad habits) stop caring about situations like this, but that number — as Cousins’s improvement and Irving’s recent malaise suggests — does exist. Had the Cavs gone the other way, both Irving and the team could be in very different places. Predicting which veterans would have actually been available, and willing to go to Cleveland during that summer, is nearly impossible to do, but a few names — like Andre Iguodala, who was moved from Philadelphia to Denver that summer as part of a blockbuster trade — make for intriguing “what if” scenarios. I’m sure Cavs fans would take a solid but limited (hypothetical) core of an ascending Irving, Iguodala, and Varejao over the hot mess currently being piloted by the disenchanted Irving that they have now. As Lowe has pointed out, in numerous pieces on this site, teams that end up being merely just “good” — like the Joe Johnson–era Hawks — aren’t exactly failures.

Though the current trend is to build through multiple trips to the lottery, the bottom line is there is not necessarily a surefire way to rebuild a franchise. Continued losing for the right to draft a second young star is a risky proposition. The Cavs are dealing with the fallout from their gamble while the Kings are looking to bypass that approach. It’ll be interesting to see who else around the NBA takes notice.

Hearing that Knicks are trying again to re-engage Denver and sell Nuggets on idea of trade built around Shumpert-for-Faried before deadline.