Two Paths to the Frozen Four 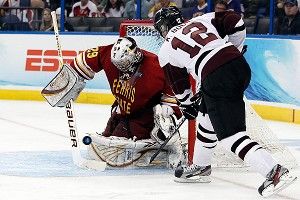 You don’t get to the Frozen Four without having a really good goalie. I haven’t been keeping an official count, but I’d estimate that, of all the players and coaches and writers and fans and sports information directors and random guys in elevators who I’ve spoken to over these last few days, roughly 93 percent of them have at some point uttered a variation on that theme.

And yet for both Ferris State and Boston College, the two teams who will play for the national championship Saturday night, the 2011-12 season began with much uncertainty in net.

Senior Taylor Nelson, who arrived at Ferris State as a highly touted freshman but finished last season in frustration, spent the summer rebuilding his game from the bottom up. “By no means was I given the starting job coming in [to this season],” he told Inside College Hockey. “I felt like I had to prove myself again.” And Boston College junior Parker Milner was among a platoon of Eagles netminders that as recently as two months ago were still jockeying for the starting role.

“Right now, we actually have four ‘B’ goaltenders,” BC coach Jerry York said in February.

York might not have known it at the time, but one of them was already emerging as the clear A+. Following a string of games mid-January in which the Eagles went 1-3-1 with a by-committee combination of Brian Billett and Chris Venti in net, Milner got the start in a home-and-home against New Hampshire and has been the team’s goalie of record in all of BC’s 18 games since. And, oh yeah, Boston College has won every single one.

“I think, personally, what I do mirrors what the team does,” Milner said Friday, when asked about his and the team’s turnaround midway through the season. “I try to work hard just as the team did. Everyone wants to get better every day and I don’t want to be something that’s holding back a really good team.”

The 18th-straight win came on Thursday, as the Eagles dispatched Minnesota in the Frozen Four semifinals 6-1, despite being outshot 31-25.

“He’s only given up one goal in the NCAA tournament, and so obviously he’s doing something right,” said a dejected Zach Budish of Minnesota following the Golden Gophers’ loss — which might not have been so lopsided were it not for Milner’s steady play in net.

He made a big sliding save on Minnesota’s Taylor Matson with less than a minute to play in the first period to maintain BC’s 1-0 lead, and in the second period he withstood a spirited several-minute onslaught as Minnesota tried to cut a 2-0 deficit in half before heading to the locker rooms. Instead, in one of those whiplash momentum shifts that can be crushing to watch, Boston College took efficient advantage of a few Minnesota mistakes and netted two more to double its lead before the second intermission.

“If I had scored there, I think it would be 2-1 and we’d be right back in the game,” said Minnesota’s Jake Hansen, who had one of the attempts. “Instead they end up scoring on the next shift. So … just kills ya.”

Boston College has enjoyed elite goaltending for some time now, with recent goalies including the Florida Panthers’ Scott Clemmensen, the Vancouver Canucks’ Cory Schneider, and Eagles stalwart John Muse, who won three Beanpots, three conference titles, and two national championships during his time at BC. York marveled after Thursday’s game that he had never seen one of his goalies suddenly have “a light bulb come on” the way Milner’s did midway through the season. “He’s improving every week,” he said. (By the way, hearing York pronounce the name “Parker Milner” in his distinctive Boston accent is one of life’s great joys.)

“I don’t think you can be an elite team unless you’ve got a remarkable goaltender,” York said. (See?) “And Parker, he’s become Schneider, Muse, Clemmensen. His March and April have just been outstanding. Look at his stats and save percentage. He’s going to be ranked right up there with those players.”

Throughout his first three years at Ferris State, Taylor Nelson had the opposite situation going on: He was essentially devolving. After arriving in Big Rapids, Michigan, as an anticipated recruit (and fresh off a national championship on the junior level back in Saskatchewan), Nelson played in 19 games, then 16, and then, during his junior year, just four. (He went 0-2-0 with a 3.10 GAA.)

“[Starting goaltender] Pat Nagle was an All-American, so it’s not like [Nelson] lost out to a garden-variety goalie,” Ferris State coach Bob Daniels said. “Taylor is such a hard worker that his response to that was to work even harder.”

The harder he tried, though, the worse he got. “He lost his golf swing,” Daniels said by way of explanation. Like the yips? “Yeah, the yips,” he said. (I brought up the novel The Art of Fielding, which is based at a small school like Ferris State and contains a plot line about a star shortstop who suddenly can no longer make a simple throw to first. “Maybe it’d be a good book sometime for the goalies to read,” he said, then said it sounded like Chuck Knoblauch.)

“In hockey, if you’re a forward or defenseman, you can just go out and hit somebody, you can block a shot,” Daniels said. “If you’re a goalie, and you’re not making a save, there’s really nothing left for you to do. It becomes a really difficult position. He started throwing his body at pucks. You can’t do that — you have to in some ways let them hit you.”

Eager to find a solution, Nelson opted to spend his final collegiate summer in Big Rapids rather than training back at home. I spoke with fellow Ferris State senior Aaron Schmit, who scored two of his team’s goals in their 3-1 win over Union in the semifinals Thursday, and I mentioned that I had heard Nelson had a big summer of working out.

“Well, you can’t really tell,” Schmit joked, nodding his head over at Nelson’s lean frame. “But it wasn’t so much muscle building as it was goalie work.”

Working with the team’s strength and conditioning coach Dave Cencer, Nelson completely broke down his game and rebuilt it bit by bit. “He didn’t do anything like reinvent goaltending,” Daniels said. “Just went right back to the fundamentals. It was work on your footwork, work on your movements, your muscle memory.”

All this working on … well, it worked. After beginning the season splitting time with freshman C.J. Motte, Nelson ultimately won the starting role. He compiled a 20-6-3 record, pitched three shutouts, and had a GAA of 2.10. He was named to the All-CCHA first team, stopped 47 of 49 shots against Denver and Cornell in the NCAA regional tournament, and was named its MVP.

What’s more, his play gave his team greater freedom to implement their aggressive defensive system, which includes a lot of shot-blocking and swarming.

“That’s where it all starts,” Schmit said. “You don’t have good goaltending, you’re not going to go very far.” (There we go again!) “Nelly’s been awesome all year. He’s really been our backbone, and he makes it look easy.”

For someone whose playing career had been getting increasingly difficult, that’s the highest of compliments. What’s more, Nelson earned the win on Thursday and the championship berth over another heralded goalie, Union sophomore Troy Grosenick, who had started only one game before this season and emerged as one of the country’s top netminders. Grosenick played nearly as well as Nelson on Thursday, but one small miscue — a juicy angled rebound that Ferris State walk-on Kyle Bonis buried — turned out to be the game-winner for the Ferris State Bulldogs.

Before Thursday’s game, Nelson had been asked about the matchup between him and Grosenick, and one expects that his answers would probably apply to Saturday’s showdown with Milner and Boston College.

“Our main job is to keep the puck out of the net,” Nelson said. “And both guys are willing to do that. I know I am, and he sure as heck is, too. The good thing is that I don’t have to line up against him in the face-off circle or on a breakaway in that regard. So we just have to keep the pucks out of the net. That’s the main goal. Stop the little black thing.”

Stop the little black thing. It doesn’t get much simpler or back-to-basics than that.