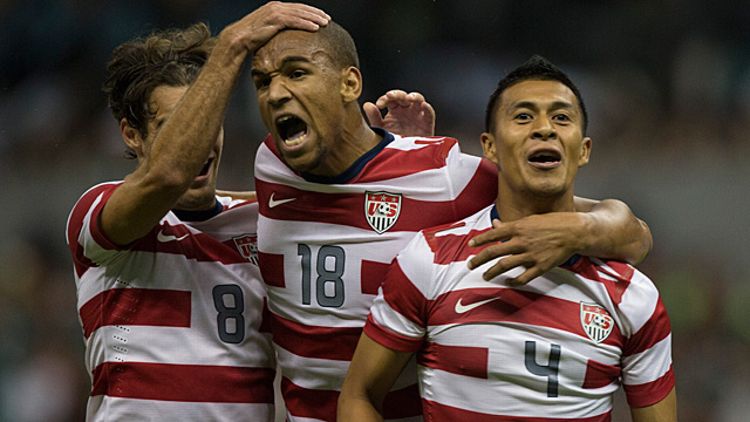 Before Wednesday’s friendly between the U.S. and Mexico in Mexico City, there was talk. Lots of talk. Of the United States’ 0-1-23 all-time record in Mexico. Of the Estadio Azteca, the buzzing cauldron where the crowds of 100,000-plus El Tri fans usually taunt American players and shower them with liquids, varying in form from alcoholic to human. But the loudest talk was of Mexico’s recent achievements and the United States’ recent failings. The U.S. failed to qualify for the Olympics, while, four days before Wednesday’s match, Mexico won Olympic gold, beating Brazil in the final. Add their Olympic triumph to their U-17 World Cup victory and the question needed to be asked: Is there a gap in quality and talent and player development between Mexico and the U.S.?

Yes, there was a lot of talk. But there was also a match to be played.

It was not a particularly beautiful game; the USMNT never heads south of the border planning to put on a lovely display of soccer. They go there hoping to get a result. Maybe a reasonable loss. Maybe a tie. Coach Jurgen Klinsmann fielded a rather hardscrabble team made up of young prospects and two veterans — Landon Donovan and Tim Howard. The timing of the match made it difficult to pull in either country’s top talent. The English Premier League starts this weekend, MLS is in full swing, the Olympics just ended, and other European leagues are in preseason training. Add to that the roaring wave of momentum Mexico was riding into this match, and most people didn’t give the U.S. a chance.

No one except for Jurgen Klinsmann. Before the game, ESPN’s Bob Ley, Taylor Twellman, and Ian Darke all mentioned how Klinsmann bristled at Tuesday’s press conference when somebody mentioned the fact that the U.S. had never won in Mexico. You could hear an aggressive rasp in his voice in the footage from an interview aired during the pregame show. You saw in those sparkly blues the hunger and anger of a fierce competitor. And you remembered — or maybe realized — that behind Klinsmann’s calm, almost Zen-like aura is a man who succeeded at the very top levels of soccer — a man who scored goals at three World Cups, who won a World Cup in 1990. A man doesn’t get where he is by being soft. Klinsmann doesn’t want to his team be soft, either. When he became the coach of the U.S. a year ago, he talked about tactics and skill. Since May, he’s been all about aggression and urgency.

On Wednesday, this team showed some aggression, in one crucial area in particular: defense. This was surprising; it was the back line that many people thought would be the team’s weakest point: All of the usual starters were missing. Maurice Edu, typically a central midfielder, partnered central defense with Geoff Cameron, who only last month was sold from the Houston Dynamo to Stoke City in England. But on Wednesday, Cameron and Edu — along with Edgar Castillo and Fabian Johnson — held their line. They closed space on opposing attackers, they cleared away crosses, they covered men running through the defense, and they communicated amid the buzz of cheers and jeers in the Azteca.

In a way, this looked like a team of has-beens and youngsters heaved onto the field for their last chance to prove themselves. Jose Torres: Want to play defense? No? Take a seat. DaMarcus Beasley: Can you get the ball and run at players. No? Go back to Puebla.

But despite a few poor performances, this team pulled out a historic win on the backs of a few guys who stood up to the challenge and others who redeemed themselves.

The diminutive Edgar Castillo at left back fended off Mexican attacks from the flank; Edu played strong in an unfamiliar position; Cameron looked poised, particularly during a moment in the second half when, sprinting back toward his own goal, he headed away a cross, going completely against the momentum of his own body. After the match, Klinsmann was effusive in praising his defenders: “The way Maurice Edu and Geoff Cameron played in the center and Edgar Castillo proved himself in a big game means a lot to us and I think they deserve a big compliment.”

And then there was Brek Shea — a 21-year-old star who’s had a troubled season with FC Dallas, suspended by MLS and benched by his coach and Michael Orozco Fiscal, who was basically out of the national team nine months ago.

Shea and Orozco Fiscal were essentially a realization of Klinsmann’s vision for the national team: They played with aggression, creativity, and technical skill. When Shea came on the field in the second half, the first thing he did was get the ball and run at two Mexican defenders. He nutmegged one and crossed to Terrence Boyd — who only a year ago was playing with Borussia Dortmund’s reserve team. Boyd, in the 6-yard box, backheeled it to Orozco, a right back who happened to be waiting around to see what Shea might be able to create. All of a sudden there he was, three yards from goal with the ball at his feet. All he had to do was redirect it into the goal to give the U.S. the lead.

After that, all that was required was for Tim Howard to be a superhero. To salvage this win for the U.S., he pulled off two staggering saves: first, after moving to his right to save a shot, he readjusted when it was deflected, and smacked the ball off the goal line. The second came off a snapped header that looked bound for the back of the net. Howard batted it away, then kicked it off the line, and Edu came sweeping in to clear the ball away.

And that was all the U.S. needed. They stayed organized on defense. They took advantage of what was essentially their only chance of the game. It was a bit lucky. Klinsmann knew it, too: “We want to try and get closer to the top 10 nations in the world. We know we’re not there yet. Does it mean a lot to us winning at Azteca Stadium even if we have some luck? Yes, it does.”

A year or so from now, the U.S. will likely head back to the Azteca to play Mexico in a World Cup qualifier, the two teams engaging in their usual battle on the road to the World Cup. Before Wednesday’s match, the Mexican wave of momentum was a roaring force. But the U.S. turned back that wave on Wednesday with their gritty, 1-0 win, the country’s first ever in Mexico.

Last weekend, before the game, I spoke to Alexi Lalas about his thoughts on the game. He said: “I think it’s a great opportunity, and I have no idea why the Mexican Federation wants to do it. This is a gift.”

Next year, in the weeks leading up to that World Cup qualifier, Mexico may wish they’d never given the U.S. such a lovely gift.