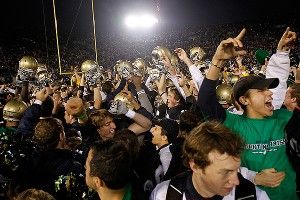 Earlier this week, I laid out the Rules of College Football Fandom. I had two goals. My first goal was to salute everyone who is exercising a legitimate claim to a college football team. My second was to tell the rest of you that you are despicable.

A bunch of readers wrote in with their own fan dilemmas. You wanted to know if you were legitimate or despicable. I’m happy to help. See which one of these quotes describes you (I’ve put them in my own words):

“My alma mater has no football team.”
Thanks to Will Cain — writer, CNN contributor, and Pepperdine grad — for this one. If your school, like Pepperdine, doesn’t have football, I hereby declare you an NCAA free agent. Will went to grad school at Texas, making the two of us fellow Longhorns fans.

“My alma mater canceled the football program before I got there but restarted it after I left.”
This incredible moral dilemma comes from journalist extraordinaire Mike Riggs. Mike’s alma mater, Stetson University, canceled football way back in 1956. So Mike, like Will, became a free agent. But will his free agency expire when the Hatters restart football next year?

No, it won’t. The crucial years are the ones when Mike was there. He went to school in a football-less universe, and he can therefore continue to be a Florida State fan.

“I’m Catholic.”
Notre Dame has a giant non-student fan base, or at least they did before Bob Davie showed up. So what about you, non-alum Irish fan?

If you want to root for the Irish, you’ve got some options. You may qualify for my 1-AA Exception (basically, if you wanted to go to a D-1 school but grades, money, etc. kicked you down a division, you can “upgrade” your fandom). If you didn’t go to college, you’re also free to root for Notre Dame.

What if you grew up loving Notre Dame but attended, say, Boston College? It’s morally reprehensible to root for both Notre Dame and Boston College. They play each other on November 10. If that’s the nature of your double-fandom, see a priest immediately.

“My D-1 school sucks.”
Ken Bud Sothman went to Ball State. He asks: Why can’t I get an upgrade? Why does an Indiana University Kokomo grad qualify for the 1-AA Exception but a Ball State grad doesn’t?

Here’s why: Because Ball State has big-time opponents. This year, the Cardinals play Clemson and Indiana. You might think you can adopt Notre Dame, Ken, but you’re just inviting a future double-fandom scenario. This is what we’re absolutely trying to avoid in college football. You should never end a Saturday by saying, “Well, I broke even.”

Moreover, Ball State made a bowl as recently as 2009. The dynamite will go boom again. And when it does, Ken, you will have TCU-level bragging rights.

“I’m in the military.”
If you’re in the Army but didn’t go to West Point, Frank Venis suggests, then you should still be able to claim Army football as your own. I think you’re right, Frank. Ditto anyone who served in the Navy or the Air Force.

“I’m Archie Manning.”
If your son plays ball at a school other than your alma mater — that is, if you’re Jim Jeffcoat or Barry Sanders or Manning back in the ’90s — then it’s OK to be a double-fan. You can’t root against your kids.

“I work for the university’s athletic department.”
Another fascinating case. Your job is to help your employer win. But you don’t want to abandon your alma mater, either. This was sent by Penn State alum/Virginia employee Chris Birch. Here, I’ll grant the Barry Switzer Exception, named for the Arkansas grad turned Oklahoma coach. You’re free to root for both schools, Chris. If Barry can maintain this cognitive dissonance, so can you.

P.S. If you get a job at yet another school, let’s talk before you adopt a third team.

“I’m a professor.”
Last time, I wrote that a professor could switch his fandom to his new employer, but must renounce his alma mater at the same time. Jeff Forbes, who teaches computer science at Duke, points out a logical flaw. Forbes, who got his BS from Stanford, doesn’t want to ditch the Cardinal. But he also finds himself teaching Duke’s players, so rooting against the Blue Devils would be a larger violation of his professional M.O.

That makes sense. Professor Forbes is now a legitimate double-fan.

“I didn’t go to college in the United States.”
This is sort of like an American shopping for a Premier League team. I fully endorse this process, and I’d love to see it take place.

“LOL, some Longhorn jackass thinks my fandom is invalid. As if I didn’t watch every single game as a kid. Well, eff you —”
Thanks to the entire Internet for this one.

Look, part of the reason these rules seem strange is that they’re the diametric opposite of pro-sports rules. In pro sports, childhood cinches your fandom. You grow up worshiping a team. “They’ve been mine since I was an infant,” you brag. I do this with the Cowboys, Mavericks, etc.

In college football, your first 18 years on Earth are just a walk-through. It’s not that your memories of Ken Dorsey and Craig Krenzel are worthless. It’s that when you turn 18, you have a chance to take the next step. You can attend the college. (Again, if you really can’t, I’ve got you covered.) If you actively choose not to, then you’re rejecting the college and its football team, too.

Imagine if I said, “I went to Texas because of the superior football program, but I’ll always consider the research libraries and celebrity professors of [insert private school I never attended] to be my own.” That’s kind of what you sound like. It’s absurd.

“I was attempting to win an HDTV and wound up attending the University of Phoenix.”
Thanks to @THEgreatTB for the most mind-blowing dilemma in NCAA history. Give me till August 30 to solve it.