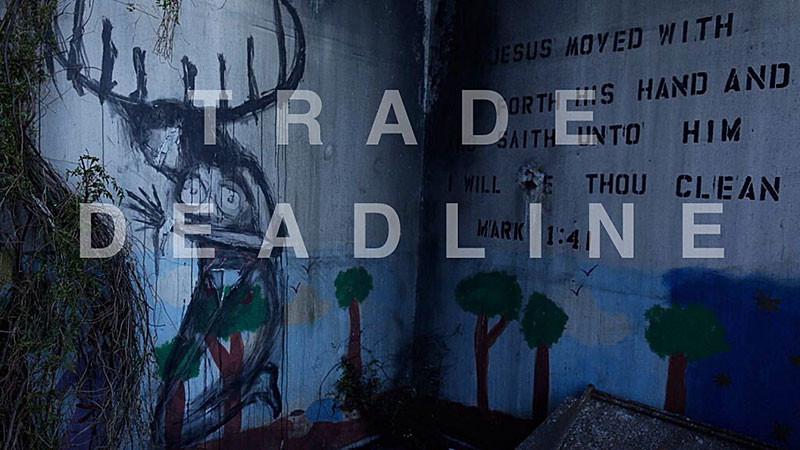 Detective Gilbough: Thanks for coming in, we—

Rust Cohle: First off, somebody’s got to run and get me some beer.

Det. Gilbough: [Crosstalk.] … you know you can’t smoke in here.

Cohle: You want to hear this or not?

Det. Gilbough: Tell us what you know about the rumored Clippers deal.

Cohle: Shumpert and Felton to the Clippers for Darren Collison, Reggie Bullock, and whatever else to make the salaries match. Yeah, I heard about it. See, the thing to understand is the Knicks are a mistake. A mistake of evolution. Nature gave us consciousness and created an aspect of nature separate from itself. We are consciousnesses wrapped in rotting meat trying to figure out the point of it all, and the lesson of the Knicks at deadline day is this: There is no point. Of course the Knicks want to trade Felton. He’s shooting 29 percent from 3, only makes 53 percent of his dang layups, and gets caught on screens like they’re made out of rubber cement. Collison? Well, he’s a slight upgrade. Slight. And he’s got a cheaper contract. Sure. The question then becomes why the Clippers would take on Felton just to add Iman Shumpert—

Det. Papania: What about Iman Shumpert? They sure have been trying to trade him a bunch. It’s not like he’s been playing well on offense. But he’s an athlete. Defends the perimeter. The team is almost seven points per 100 possessions better when he’s in the game.

Cohle: And two points better on offense per 100 possessions, despite Iman only shooting 33 percent with zero free-throw attempts over his last eight games. Listen, detectives, 14 years, hour after hour, watching Knicks draftees, wasted assets, young players who come in here all full of life and excitement over playing in the Garden, in New York City, making hashtags and all multipart handshake celebrations, jumping off the bench to high-five teammates — you know what you recognize after all that time? You look in their eyes as the trade rumors pile up, doesn’t matter if it’s on TV or in the paper, you can still read them.  And you know what you see? At the end, they welcomed it. Welcomed the trade. Not at first. At first they were angry, bewildered, betrayed. But after month after month of being yanked around, not being developed, they realized how easy it was to just let go. That’s what happened to Iman.

Cohle: Might as well. He’s ruined anyway. [Cuts beer can into the shape of a man.] They all are. Any young player who goes in there will be. Still, Shumpert and Felton for Collison and Bullock is still a giving up an asset to make what is essentially a lateral trade. I’d try to get a draft pick for him.

Det. Pampania: [Slides folder across table.] What about Udrih for Jordan Hamilton?

Cohle: [Opens folder, looks at pictures inside.] Is that all you got?

Cohle: Twenty wins, can’t guard anything, random double-teaming, sagging off 3-point shooters. Nah, they won’t fire him. He’s got friends in high places, detectives. [Takes drag on cigarette.] See, the trade deadline for the Knicks, same as the offseason, it’s all about selling hope, a light at the end of the tunnel. Well, that’s what the general manager sells, that’s what the owner sells, talking about competing for championships after dealing three draft picks for Andrea Bargnani, or floating the details of a trade for another one-way player, or over-the-hill malcontent. Matt Barnes. Ha. See, the front office encourages your capacity for illusion. Then they tell you it’s a fucking virtue. Always a buck to be had doing that. Season ticket sales, corporate luxury boxes. And it’s such a desperate sense of entitlement, isn’t it? [Gesturing toward ceiling.] “Surely this is all for me? Me, me, I … I … we’re so fucking important, the World’s Most Famous Arena.” Fuck you. See, in this eternity, there is no time.

Rust Cohle: You ever hear of something called “M-brane theory”?

Det. Pampania: No, that’s over my head.

Cohle: It’s, like, in this universe, we process time linearly. Forward. But outside of our space-time, from what would be a fourth-dimensional perspective, time wouldn’t exist. From that vantage, our space-time would look flattened, with matter occupying every position it ever occupied. And we just run around on that track. I mean, how many times have we had this conversation, detectives? About what the Knicks will do, which moves they’ll make? How many times have we been in this room, talking about the team being over the cap, giving up assets for moves, that at best, move the team sideways on their little infinite track of space-time? We’ll be here again, detectives. Wondering if Mike Woodson is going to be fired. Again. And again. There’s no closure. Ha. Closure. This is a world where nothing involved with the Knicks is ever solved.