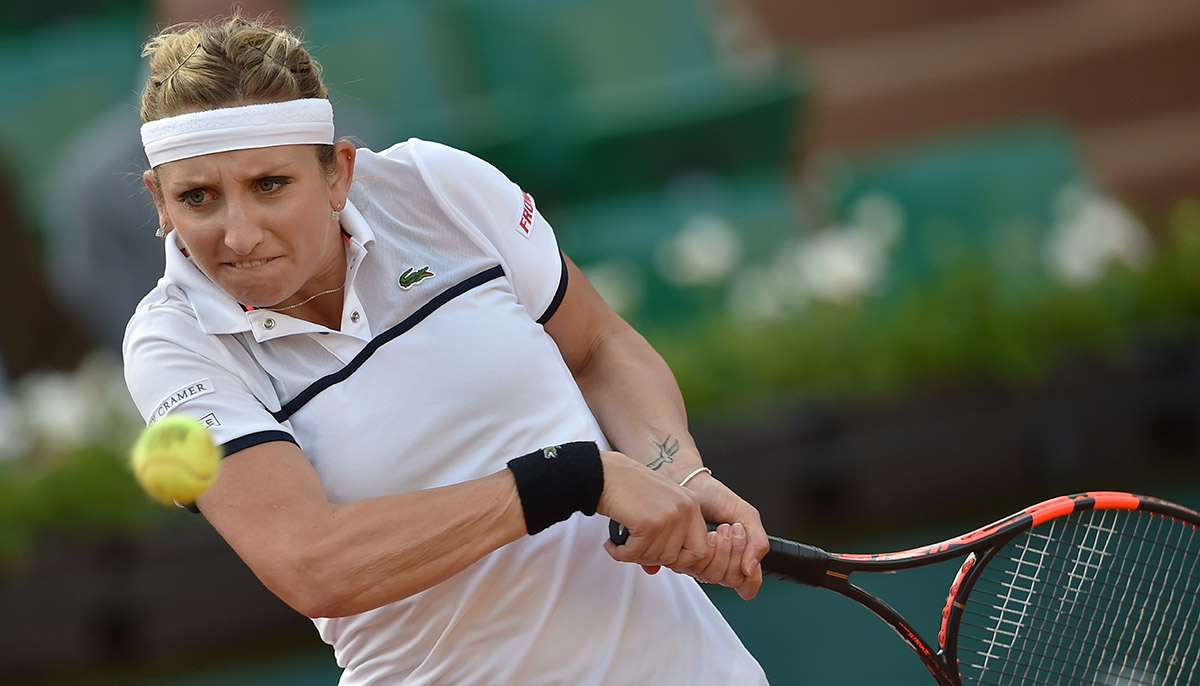 Timea Bacsinszky had clay smeared on her white dress, the evidence of a rough tumble as she’d tried to reach a shot. The match had not been easy. She’d been tight early, losing the first set 6-2. Petra Kvitova, the two-time Wimbledon champion and a French Open semifinalist, had pounced on her serve and exploited the weakness in Bascinszky’s unusual forehand, which has an extreme grip and takes time to set up. The atmosphere after a blockbuster day of tennis — Frenchmen, favorites, the upset of one former champion and the near upset of another — was quiet and subdued. It was getting dark. The stadium was almost empty. It looked like Bacsinszky’s run was almost over.

But she was patient. Across the net from her was one of the most — perhaps the most — talented player on tour, but also the one most likely to set up the perfect point and then misfire, the one most likely to turn a routine victory into a meltdown and then spectacular implosion. Bacsinszky couldn’t match Kvitova’s scudding, explosive groundstrokes; she didn’t have her opponent’s big lefty serves. What she had was endurance, intelligence, and the ability to adjust. (Bacsinszky is the rare player who will run around her forehand.) So she started changing the game. She threw up high, bouncing forehands and slow, skidding slices. She found a way to crack the whip of her backhand, an elegant stroke that she hit for sharp angles. And she hit drop shot after drop shot.

Bacsinszky has always liked the drop shot — maybe a little too much. She has nice touch, but no genius for it; she sometimes leaves those balls sitting up. But the drop shot seems to appeal to her. It’s unpredictable, and it puts the point in her hands. She’d once hit a drop shot off Serena Williams’s second serve — twice in a row. Serena responded with an ace and a glare. Bacsinsky laughed when she recalled it earlier this year. “But I loved this,” she said, remembering. “I loved this reality of trying to get control of the other.”

So now she had a point for 5-3 in the third set. Kvitova was completely out of sorts — framing forehands, shooting backhands wide. She’d gone haywire. Bacsinszky dropped a feathery little dropper close to the alley — not quite pretty, but just soft enough. One game later and Bacsinszky had finished it, 2-6, 6-0, 6-3. Through to the quarterfinals, she is a heavy favorite to make the semis. The brick-brown clay caked on her leg looked like the result of an old open wound. She raised her hands, ecstatic.

She couldn’t have imagined this. For a long time, she says, she wasn’t sure she even wanted it.

“Why are you so damn good now?” a reporter had asked her in March, at the end of a 15-match winning streak. “I took a magic potion,” she joked. “No, that’s not true.” She’d been working hard, she said more seriously, and not only on her tennis. “I have been working a lot on myself.”

Two years ago, in May, Timea Bacsinszky received an unexpected email: an automated notice that she had made the cutoff for the qualifying tournament for the French Open. It was not a dream come true; she had, in fact, won main-draw matches at Roland Garros four times. It was more like the beginning of the end of a nightmare.

Once, she had been a prodigy, the only player besides Martina Hingis to win the prestigious Les Petit As title twice. She had reached four major semifinals as a junior, had won her first International Tennis Federation Circuit title in 2003, had been expected to go on to win and win. She had turned pro and showed flashes of promise, reaching the top 40. In 2008, at the U.S. Open, she had been two points from beating Darina Safina, the hottest player on tour at the time and a future no. 1. She was 19 then, rangy and daring, with large, round kohl-lined eyes. She had the hungry and slightly feral look of a raccoon.

Then, in 2013, she was 23 and about to quit tennis, working at hotels and restaurants as an intern and planning to attend hotel management school in the fall. She was putting the game behind her, taking control of her life. For years, she had felt suffocated. Playing tennis had never been her choice, she would later say. It was her way of getting love; it was her way of ensuring that her family was happy. When she lost, her parents fought. She felt that her home was a “prison.” Her father pushed her, hard. “It’s happening a lot, especially in tennis, because — especially in women’s tennis, because for sure, as a woman, as a young girl, you can never go against the power of the dad,” she told Tennis after a match this March in Indian Wells. “You have no money or nothing.” Her only way of rebelling was to dictate what she did between the court’s alleys. Her father would tell her to go cross court; she would go down the line.

When she was around 15, she says, she told her mother that if she did not leave her husband, Bacsinszky would leave them both. Her parents divorced. That helped, she said. But bad injuries kept her out of play for a long stretch; her ranking tumbled out of the top 500; she was demoralized. She started seeing a psychologist. She started thinking of the rest of her life.

Then came the email. She called her boss, said she’d be out of work a few days, and drove from Lausanne to Roland Garros. She lost in straight sets, but it didn’t matter. “It was like if I had another lung,” she told the New York Times last year. “I could breathe more.”

She hired Dimitri Zavialoff, a coach who had worked with Stan Wawrinka. He recognized that honing her strokes was only the start. He started reading books about psychology; he started thinking about her mind. And she thought about her own heart. Why did she want to play? Why didn’t she?

She faced a long climb. Last year, she was again at Roland Garros’s qualifying tournament. This time, she made it through, before losing to Carla Suarez Navarro in three sets during the second round. Then came an upset of Maria Sharapova in the fall, Kvitova earlier this year, and then a 15-match win streak, including two titles, before losing to Williams at Indian Wells.

How did she do it? This was her life, her game, her pleasure. She learned to adjust, to follow a plan where a plan was needed and then to break it where it was not. “There is always this touch of spontaneity,” she said earlier this tournament. Take that drop shot. It’s a small way of taking control, of saying, “Here I am. Watch me now.”

Seven Questions That Will Shape the NBA Finals