Things We Found on eBay: A Harper Home Run Ticket and a Roller Hockey Jersey (Not Worn by Matthew Perry) 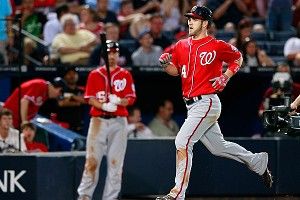 Bryce Harper 5/27/12 4th Home Run #4 Ticket Unused! – $6.00
On the surface, this seems like a perfectly harmless and inconsequential eBay listing that like many others before it makes you ask yourself, “All right, who would really buy this?” But then when you look a little closer, this item makes even less sense, because the very question you just asked gets answered when you see that there are only six available — AND FOUR ALREADY SOLD. Four people saw this listing and then bought it — and that is just in the last 36 hours.

Let’s go one level deeper here. The page counter currently has 27 views, according to the little counter thing on the bottom, so that means, besides Sarah Larimer (who found this listing) and me, of the 25 people who previously looked at this item, four of them could not contain their excitement at the opportunity to buy a ticket stub for a game that (most likely) they did not attend and felt compelled to pay $6 to “buy it now.” That’s almost a 20 percent conversion rate (the rate of views that turn into, in this case, sales) — do you know what converts that high? Almost nothing! The average conversion of selling things on the Internet is LESS THAN 3 PERCENT. Think about what’s happening right now: Bryce Harper is bending the conventional laws of the Internet at his whim with ticket stubs of a random game in which he hit a home run. IS THERE ANYTHING BRYCE HARPER CAN’T DO?!

Game Worn Celebrity All-Star Roller Hollywood Hockey Cup Jersey NHL RHI PBH — $84.99
Sometimes you can find things on eBay that are a perfect time capsule of an era. This tie-dyed NHL/Comedy Central pro-am street hockey jersey is one of those things. Representing glowing pucks and a time when Eric Lindros would appear on MTV’s coverage of the NHL All-Star Game (Yep! That happened! — To be honest, I had trouble finding the clip that is for some reason carved deep in my brain of Ananda Lewis — it may have been Serena Altschul — interviewing Eric Lindros in commemoration of the All-Star Game, but it definitely happened and it definitely was a thing), this jersey stands for something special. Although, that being said, it’s probably not $94 (after shipping) special — now, if it was a Bryce Harper NHL Breakout ’96 jersey, that would be a different story.

Yeah, no one’s buying this.