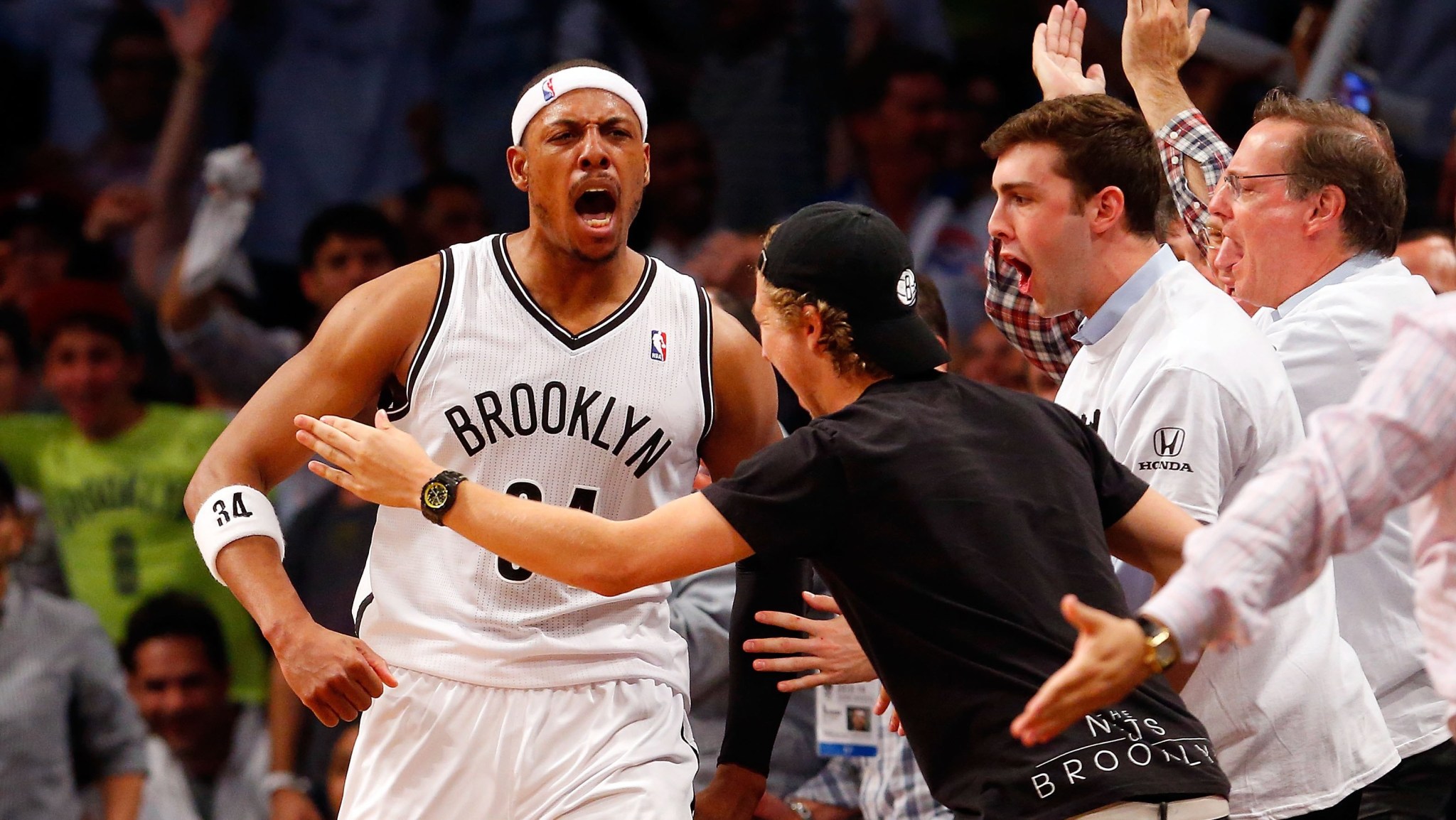 How did you hear about it? Were you at a party Saturday when suddenly everything stopped, and everyone spent 20 minutes talking about Pierce going to the Wizards?

After that, how long did it take to text all of your friends?

How long before you called your parents to tell them the world isn’t just full of disappointment, but sometimes good things happen, and maybe everything’s gonna work out in the long run?

I feel like Rod Tidwell at the end of Jerry Maguire right now. Two weeks ago, I was all set to walk away from this offseason with a little bit of naive hope in my head and a lot of depression in my heart. The Wizards were going to overpay Trevor Ariza to keep him, they would forfeit their flexibility for the next four years or so, and it would all turn into the most depressing seventh seed ever. Everybody knew it was coming.

So Wizards fans were down. With LeBron bringing the rival Cavs back to life during all of this, nobody was sure if we’d ever get up.

That brings us to this past weekend. Let’s go through a timeline.

This was the best possible scenario. The Wizards brought back Marcin Gortat at market price and refused to overpay Ariza to keep him in D.C.

Instead, this means the Wiz will have this year to see what Otto Porter can do playing real minutes, which should have been the plan all along. The future makes no sense if this team’s just going to punt on a top-five pick. Letting Ariza go also means there will be extra cash to spend down the line, and that (somehow) Washington’s not the team that screwed up and paid too much for contract-year Ariza. It turns out that signing Ariza for $10 million a year would have been so Wizards that it was actually too Wizards.

The only question is, who’s going to start at small forward for the Wizards?

Grantland’s having a party. Zach Lowe tells everyone the news. It takes a second for any of this to register.

But wait a second …

They probably overpaid him, right?

It was just the midlevel exception for two years???

I love it so much. Partly because two years for the midlevel exception is just a smart deal, and also because this confirms the Wiz are actually a team that good players respect. The reason nobody ever even considered Pierce was because we figured he’d go to a playoff team like the Clips, the Nets, or maybe even the Cavs or Bulls. But this is a reminder to everybody — maybe even Wizards fans — that D.C. has a playoff team, too. But I love it most of all because Pierce is the greatest. It’ll be a hundred times more fun to root for him than someone like Luol Deng, or whoever else the Wizards wanted to replace Ariza.

Remember the shot against the Raptors in the playoffs? “That’s why they brought me here”? Remember the homeless man’s facial hair? Remember when he spent the first week of free agency playing in the World Series of Poker?

And @paulpierce34 wins another pot in the $10K PLO event at the @wsop (cc: @espn @SportsCenter) pic.twitter.com/jKh3sdrDeb

Likewise, the Cleveland revival means the Cavs/Wiz rivalry is coming back next year. Right? Just a little bit? Throwing in Pierce will only make those games more fun. It’s the perfect way to add to the history of guerrilla warfare between him and LeBron.

On a practical level, Pierce will probably be even more limited than he was in Brooklyn. But he’ll still help in big games, John Wall will get him easy looks, and his limits are actually a good thing. Pierce is good enough to play when it matters and to help close out games, but he’s also old enough that Randy Wittman will have to play Porter 25 to 30 minutes a game. Right? Long term, if we’re talking about Porter’s development, Pierce for a year or two is much better than Ariza for the next four.

Oh, you thought the Wizards were losing Ariza for nothing? No, sir.

Washington and Houston have agreed to a sign-and-trade for Trevor Ariza, league source tells Yahoo. Wizards get $8.5M trade exception.

Albert Lee and Bullets Forever explain the trade exception in depth, but basically it means the Wizards can trade for an extra veteran (Ersan Ilyasova? Thad Young? DeJuan Blair?) without having to give equal salary back in the deal.

Say what you want about Ernie Grunfeld, Ted Leonsis, and Wizards management — and I’ve been as cynical as anyone — but they played this perfectly. They wouldn’t cave to Ariza’s contract demands, and when he left for Houston, they had a perfect veteran backup plan ready to go, AND they managed to position themselves for one more move.

By the way, have you seen Porter and Glen Rice Jr. in summer league???

Let’s check in on all the Otto Porter haters.

And have you seen Khem Birch? The Wizards sold their second-round pick this year, and I have only a vague idea of who Birch is (big man from UNLV), but listen. Birch could be that second-round pick!

Cassell on Birch: "He’s a shot blocker. He’s a quick jumper. He’s like Serge Ibaka. He’s not as strong, he’s not as big, but he’s effective”

This means Wizards fans get to root for Pierce and his dusty-ass haircut, we get to watch Porter play meaningful minutes for the first time in his career, and we may actually have a young big man on the roster. This while Grunfeld & Co. are still pursuing guys like DeJuan Blair. And oh, yeah, one more time: THEY DIDN’T OVERPAY ARIZA.

It still doesn’t feel real. The Wizards don’t do this. They don’t make smart little moves to hold things over but keep options open long-term. The Wizards make the DUMBEST big moves that sabotage multiple seasons at a time. Even going all the way back to Juwan Howard, this is just how things work for Washington.

But you know what they say? If you expect the worst, you will never be disappointed. And you might just get Paul Pierce.

The Wizards now have this weird mix of lovable, broken-down old guys to go with their awesome young backcourt and wild cards like Porter. It makes no sense, and I don’t know whether they’re young or experienced or rising or fading, but I love it.

Most important, the team is plenty flexible for 2016-17, when Bradley Beal and Wall will be hitting their prime, Nene’s massive salary comes off the books, they can opt out of Wittman’s deal, Kevin Durant will be a free agent, and the Cavs/Wizards rivalry could REALLY come back to life. It may seem weird and probably a little sad to be this excited about Pierce, but it’s not even about him. This is just so much better than what anyone expected. Instead of doubling down on mediocrity, Wizards fans have hope for the future and real reasons to get excited right now.

In the end, it’s a message to everyone out there who thought last year was fun, but this year the party would be over.

Honestly, even I kinda thought the party was over.

But you know what?

THE PARTY’S NOT OVER.