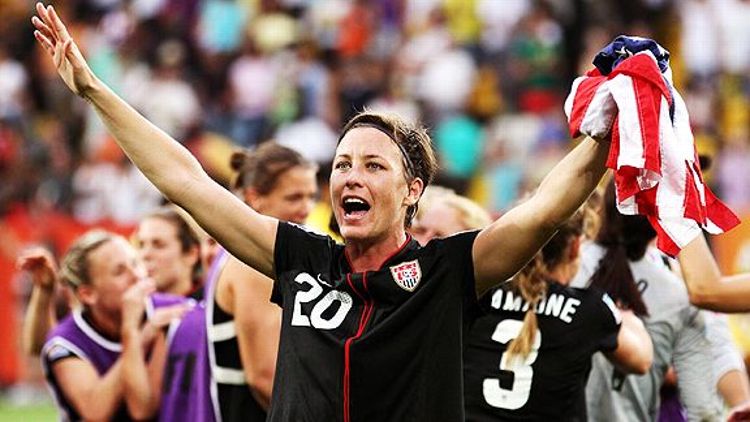 It wasn’t supposed to happen like that — the United States women’s national team’s 3-1 semifinal victory on Wednesday against France. Or, while we’re at it, the Americans’ entire World Cup journey so far.

Take Wednesday’s semifinal match as an example. The U.S. got off to a dream start, as in the ninth minute outside midfielder Lauren Cheney poked Heather O’Reilly’s cross into the net. 1-0, USA.

France was considered the tournament darling for the team’s technical talent and attacking fluidity. The team displayed both as it spent the remainder of the first half working to unlock a stingy U.S. defense.

France’s goal finally came five minutes into the second half as outside defender Sonia Bompastor served up a ball from the left flank. Hope Solo appeared to be distracted by Gaetane Thiney’s run directly in front of her and turned to see Bompastor’s shot-disguised-as-a-cross amble into the back of the net. 1-1.

After that, France continued to attack and looked ready to blast about five unanswered goals past the U.S. defense. The goals did finally come, but not from the team with most of the momentum. With just more than 10 minutes to spare, hulking U.S. forward Abby Wambach drilled a header into the net off a corner kick. 2-1, USA.

Just three minutes later, the U.S. put the match beyond reach as ingénue striker Alex Morgan delicately lifted a shot off the slick pitch and past the intervening hand of France goalkeeper Berangere Sapowicz. 3-1, USA.

Questions regarding the USWNT’s place in the global hierarchy were first posed following team’s disorienting 2-1 loss to Mexico in the semifinals of regional World Cup qualifying last November. The result was considered an upset of epic proportions. It was the first time the U.S. had lost in World Cup qualifying — the defeat put the U.S. on the verge of missing out on this summer’s tournament altogether; an utterly unthinkable scenario.

The U.S. then has to win a two-legged playoff series against European wild card Italy. Coach Pia Sundhage’s side did just that, albeit rather unconvincingly.

The team’s struggles and unorthodox route of qualification had ginned up a level of media interest that hadn’t been seen since the team won the gold medal in the 2008 Summer Olympics. It was an interesting development, one that wasn’t lost on Wambach, as per her comments leading up the return leg against Italy.

“If you’re at all smart about the media — any press is good press, especially when it comes to women’s sports,” she said. “The irony of the whole thing is when the U.S. men win they get all the coverage, and when the U.S. women lose they get the coverage. The problem with that is we are good enough, and we are strong women, and we do deserve to be in the World Cup in Germany, but we gotta prove it. And in order to prove it — the joke that we’ve been telling each other is ‘we planned this, this is the only way we’re gonna get the kind of coverage we think we deserve, and this is all just a big joke’ … but that’s obviously a joke.”

The feelings of neglect are understandable. Twenty of the team’s 21-player World Cup roster play professionally in Women’s Professional Soccer. After 2½ seasons, the league is still struggling to find true stability after the shuttering of four franchises and the relocation of another. Deep cutbacks eliminated a brick-and-mortar front office and most of WPS’ league officials work from home.

Year 3 has looked particularly bleak. Headlines have also been hijacked by a rather egomaniacal team owner who deems it professionally appropriate to publicly label league higher-up’s as “infidels.” Not good for a league painfully aware of its own unflattering self-image.

And then there’s the attendance. It’s been meager. The weekend before the national team departed for their World Cup training camp in Austria, WPS attracted a total of 6,515 people over three matches. A total, not an average. For a fully professional sports league.

It seemed that winning the World Cup might be the only thing that could save the league from following in the footsteps of its ill-fated predecessor, the Women’s United Soccer Association.

Prior to the tournament, chances of that happening weren’t particularly high. Two-time defending World Cup champion and host Germany was considered the heavy favorite. And if not them, then 2007 Women’s World Cup runner-up Brazil, whose mercurial forward Marta is peerless in the women’s game. The U.S. came in after that.

Things have transpired very differently, however, as both Germany and Brazil were eliminated at the quarterfinals stage. Now the U.S. is one game away from an unprecedented third world championship. It’s the best — and perhaps most unexpected — thing that’s happened to women’s soccer in America in a generation.

After two thrilling matches, the U.S. women’s national team is finally the subject of mainstream interest again. Perhaps this is all just an opportunity to rally around the flag in the way Olympic figure skating becomes hip and relevant once every four years. Or perhaps the team’s World Cup serves as a nice distraction from today’s news cycle. If it’s not the impending jailhouse release of a woman accused of killing her child, it’s the political gridlock over the debt ceiling or it’s the lockouts of the two most powerful sports leagues in the country. Much in the way the country was still reeling from the Monica Lewinsky scandal by the time the 1999 FIFA Women’s World Cup kicked off, the timing of all this has been rather kind to the team.

And unlike the USWNT of a bygone era, these players haven’t been at the center of massive marketing campaigns dreamt up in corporate boardrooms. Rather, players such as Wambach, Solo, and Megan Rapinoe have become recognizable for being generally awesome soccer players, and not prepackaged poster girls for a sport that exists solely on the fringes.

Solo, in particular. In addition to being a pretty brilliant goalkeeper, the 29-year-old is also something of a firebrand. She is one of the few — OK, only — polarizing figure on the team. She’s viewed with either admiration, indifference, or straight-up ill regard from the women’s soccer commune at large. She’s been known to take to Twitter to air her grievances regarding WPS policies she disagrees with, opposing fans who (allegedly) hurl insults at teammates, and/or fellow Twitter users who hold less-than-glowing opinions of other national team players. Solo has remained remarkably subdued throughout the tournament, but then again, there isn’t a whole lot to kvetch about at the moment either. And she’s now under the auspices of U.S. Soccer’s public relations arm, too.

And then, because it’s bound to come up anyway, there was the whole “I know I would have made those saves” thing after she was benched for the team’s 2007 World Cup semifinal match against Brazil. Fortunately, that episode hasn’t been revisited to excess in recent media interviews. In fact, she wasn’t even really asked about it in radio interviews conducted this week. There were more interesting things to talk about, after all, like her true-to-form “YOU WILL NOT BEAT HOPE SOLO” heroics in goal in the penalty shootout against Brazil.

The manner in which the U.S. has won its past two games has probably helped keep the conversation about the team’s positive virtues, too. The team displayed some serious heart to beat Brazil in the dying minutes like that. They it blew past France with superior fitness and sheer willpower. It also helps to have players like Wambach whose innate athletic gifts and ceaseless perseverance embody what the team is all about. Perhaps that comes from being women making a living playing a sport that is habitually treated with apathy and disregard. Every day presents some sort of challenge, most notably in the struggle to earn just a little respect. That fighting spirit is simply inherent in this team’s DNA.

The team will need that Sunday. Japan has a decent shot at upending the U.S. with its glossy passing, stout defending, and synchronized movement in attack. In fact, given the Japan’s comprehensive 3-1 semifinal victory against Sweden, the Japanese might actually be considered favorites. The U.S. likely wouldn’t want it any other way.