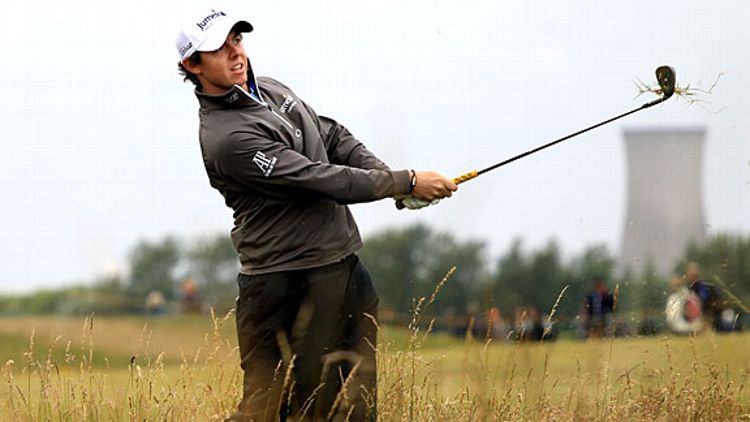 In this week’s British Open, golf fans will watch the next chapter unfold in the PGA’s never-ending, increasingly desperate attempts to turn the embers of the Tiger bonfire into sparks and then flame. Will someone toting a TaylorMade Rescue Wood magically emerge from the smoke to revive TV ratings? Is Rory McIlroy the next Tiger Woods?

No. But he’s got a shot at being the next Craig Stadler.

And I mean that as high praise. Like the Walrus, Rory’s an amazing golfer with a killer, sweet swing. But you can so clearly see in the bone structure of his cherubic face and budding Celtic body that he’s going to be 400 pounds by the time he’s 30. He has as good a chance of being the next George Wendt as he does of being the next Tiger Woods. He’ll still be a great golfer, but mark my words, he is going to pack on pounds like Kirstie Alley at a food fair in Napa Valley. Louie Anderson will be able to hide behind him. In ten years, McIlroy’s belly will help Gary McCord coin the new phrase, “Swing-a-round hook.” That is of course, if McCord is still drawing breath and has not yet been forced to wear a Doberman muzzle by the PGA Gestapo.

This is not just some irrational, untethered assessment. Look in Rory’s eyes. HE WANTS FOOD. He needs something to sate him, to fill the massive void left after expending all the determination and drive it takes to win a major. When he won the U.S. Open and got the “Masters Redemption On Father’s Day With Me Wee Papa In Attendance” monkey off his back, I’m fairly sure he headed for a Ruth’s Chris Steak House and didn’t emerge until creamed spinach was coursing through his aorta.

And while we’re at it, he will not be a Denis Leary. You can see in the Rescue Me star’s face a weathered gauntness that says, “I’m pissing my alcohol out as we speak, not in my pants, you douche, but straight in the urinal from here at 25 paces, forcing open the door with its power. Don’t move to your left.” No, Rory will inflate to the size of a jolly uncle. Look at those cheeks and tell me I’m lying. And he will be a great jolly uncle, full of irresistible anecdotes and bawdy limericks.

Here is my point: the world needs a fat golfer. A spectacularly skilled fat golfer who wins majors and jokes on the course and pulls off smoking a cigar and sucking down a martini in public and erases the dreary memory of the last rotund golfer the Empire sent over, the impeccably rod-assed Colin Montgomerie. That guy could bum out Tony Robbins. The most damning tell on Colin was that other British golfers thought he was stiff. That’s like Michael Lohan calling you a bad dad.

C’mon Rory, it’s a fine day to contemplate becoming the reincarnation of Walter Hagen instead of the latest lash of bleached pressboard to roll off the PGA assembly. To hell with filling Tiger Woods’ Swooshed spikes. To hell with the body-hugging NASCAR-esque corporate jumpsuits the game demands you wear nowadays. To hell with Rickie Fowler’s aircraft-carrier hat brim and that Swedish guy’s uppity, sartorial attitude. Do not back away from your Eire’s destiny, do not count carbs, and do not give an ab machine so much as a second glance. Let your belted pants slide gently down the white cliffs of your arse. Go Big.

In fact, start growing your Stadler mustache right now. It may take seven years to complete it.