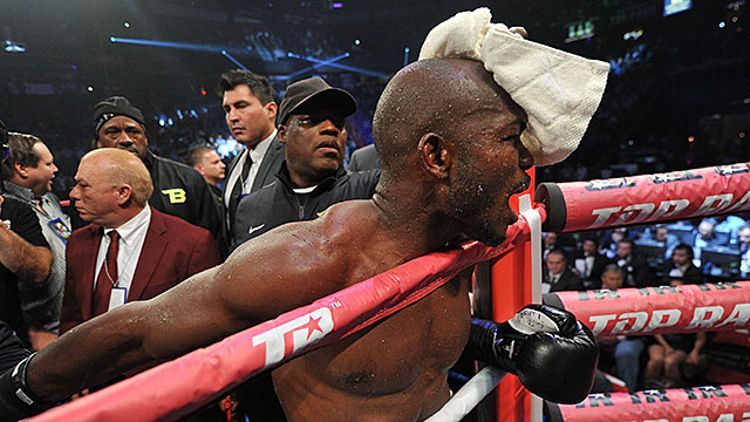 Sucker punches at weigh-ins. Judges filling out their scorecards in advance. Referees stopping fights at the count of nine. The “why wait?” attitude pervades boxing, so we at Grantland figure why wait until the end of the year to kick off our awards season?

Nothing can happen over the next three weeks that will impact boxing’s Fighter of the Year race. Sure, Marcos Maidana could upset Adrien Broner this Saturday, but all that would do is establish the Argentine as a solid addition to the honorable mention pack. And sure, Broner could make a sex tape in a Popeye’s bathroom while Rosie Perez live-tweets it (sample tweet: “Don’t screw AB; screwing is for carpenters.”), but the impact on the Fighter of the Year conversation would presumably be minimal.

The making of cases for Fighter of the Year ended on December 6, when Edgar Sosa failed to make his by losing to flyweight champion Akira Yaegashi in Tokyo. But the debate is just beginning, and it’s the most compelling one that boxing has seen in years. There are three candidates with legitimate arguments in their favor for the first time since 2004 (the year of Glen Johnson vs. Marco Antonio Barrera vs. Diego Corrales). Most years, there’s one candidate who distances himself from everyone else — see Andre Ward in 2011, Sergio Martinez in ’10, Manny Pacquiao in ’09, ’08, and ’06, and Ricky Hatton in ’05. Sometimes it’s a solid two-fighter debate — see Nonito Donaire vs. Juan Manuel Marquez in 2012 or Floyd Mayweather vs. Kelly Pavlik in ’07. But the years in which three boxers distinguish themselves? Those are rare. Hell, more common are the years in which nobody seems entirely deserving (such as when Vernon Forrest won in ’02 or when Paulie Ayala was named Ring’s Fighter of the Year in ’99).

But this year, it’s Floyd Mayweather vs. Timothy Bradley vs. Adonis Stevenson, and any one of them would be a worthy winner. And the decision will depend less on who had the best year than on voters’ different criteria. So who should be named Fighter of the Year? Let’s look at the pros and cons of each man’s candidacy:

The Case for Floyd Mayweather

If star power counts, and if being involved in the most lucrative pay-per-view event of all time counts, the man who calls himself “Money” probably cashes in. His September fight with Canelo Alvarez generated 2.2 million PPV buys, the second-highest figure ever, behind only 2007’s Mayweather vs. Oscar De La Hoya fight, which sold a couple hundred thousand more at a lower price point. (Math alert: Although Mayweather-Alvarez set the revenue record in raw terms, generating $150 million compared to Mayweather–De La Hoya’s $137 million, when adjusted for inflation the 2007 fight remains the more lucrative event.) And in two fights against highly credible — if not exactly pound-for-pound elite — opposition, Mayweather barely lost a round (C.J. Ross scorecards aside). He arguably dropped one or both of the first two rounds against Robert Guerrero, then appeared to have the edge in 22 consecutive rounds to close out his year. The best fighter in the world was utterly dominant in 2013, and he should get a little extra credit for performing this way at the if–Bernard Hopkins–wasn’t-around-this-would-be-a-bigger-deal age of 36.

The Case Against Floyd Mayweather

If in-ring entertainment counts, and if creating one-tenth as much buzz after a fight as you did heading into it counts, then Mayweather is a flawed choice. Neither the Guerrero fight nor the Alvarez fight contained a single memorable moment. All we got was Floyd giving guys boxing lessons, with the main lesson learned apparently being that throwing punches and trying to win is futile. And those opponents and their mediocre efforts will be held against Mayweather to some extent. Guerrero is a good fighter. Canelo is a good fighter. That’s about as positive an adjective as we can commit to right now. If Mayweather outboxed two guys whom history will remember as B-level opposition, is that really an award-worthy year?

The Case for Timothy Bradley

There wasn’t much of a case for Bradley until Ruslan Provodnikov bludgeoned Mike Alvarado into submission in October, retroactively changing the story of March’s Bradley-Provodnikov war from “Bradley barely survives limited slugger” to “Bradley bravely survives certified beast.” When you combined that suddenly commendable win with Bradley’s October victory over Juan Manuel Marquez — who came into the fight at no. 3 on most pound-for-pound lists, making him perhaps the best fighter who lost in 2013 — you had a welterweight who’d gone 2-0 against marginally superior opposition than Mayweather. And if winning the Fight of the Year (which Bradley-Provodnikov seems a slight favorite to be named) counts in some small way toward being Fighter of the Year, then that’s extra credit that only Bradley can earn among the three contenders. Oh, and if this is a humanitarian award on any level, Bradley can point out that he’s a clean-living family man competing for recognition against a pair of ex-cons.

The Case Against Timothy Bradley

There’s the small matter of a handful of people thinking he should have lost the decision to Marquez and several handfuls thinking he should have lost to Provodnikov. This was the argument against Glen Johnson in ’04: Sure, he’s a wonderful feel-good story, but does anyone really feel all that good about the decision he got over Antonio Tarver? At best, Bradley won his two fights this year by four or five points combined. He showed stones galore and fought with a concussion for about 11 of the 24 rounds he logged, but a Mayweather supporter would note that you can’t concuss what you can’t hit. On paper, the mathematical equation might read W 12 Provodnikov + W 12 Marquez > W 12 Guerrero + W 12 Alvarez. But Mayweather’s fights were virtual shutouts, while Bradley’s wins were decided by a margin of literally one or two punches.

The Case for Adonis Stevenson

There’s the quantity argument, which powered Donaire to victory last year. Like “The Filipino Flash” in 2012, Stevenson fought four times this year, something boxing’s highest-earning practitioners simply don’t do. And the Haitian Canadian’s quality exceeds that with which Donaire won last year. Stevenson went 4-for-4 with four knockouts. He avenged the only loss of his career, against Darnell Boone. Then he won the one true light heavyweight championship of the world (not just some fractional alphabet belt) with a stunning first-round knockout of Chad Dawson. Then he defended successfully against two solid top-10 challengers, Tavoris Cloud (ranked sixth at the time by the Transnational Boxing Rankings Board) and Tony Bellew (ranked seventh at the time). More than any other fighter in 2013, Stevenson exceeded expectations and elevated his profile.

The Case Against Adonis Stevenson

As with Donaire’s résumé last year, you can shrug at three of Stevenson’s four wins. The Boone fight was little more than a tune-up with a revenge tie-in. And rather than celebrate Cloud and Bellew’s ranking among the top 10, maybe we should focus on the fact that they both were ranked outside the top five. If you really want to minimize Stevenson’s accomplishments, you could note that Dawson, despite being the lineal 175-pound champ, was coming off a TKO loss to Ward in a different weight class and might have been physically and/or mentally damaged goods. Stevenson won and then twice defended a true world title in 2013, yes. But he was generally fighting at a lower level than Mayweather and Bradley — and for whatever it’s worth in this discussion, his name still means nothing to the casual sports fan.

The Other Candidates We Need to Quickly Dismiss

The Baseball Writers’ Association of America doesn’t hold the undisputed title when it comes to screwing up awards and votes; the Boxing Writers Association of America can muck it up with the worst of ’em. Last Saturday afternoon, at a meeting attended by whichever BWAA members were in Brooklyn for the evening’s fights at Barclays Center, it managed to leave Stevenson off the five-man Fighter of the Year ballot, resulting in such blowback that the BWAA decided two days later to put Stevenson on the ballot, along with any other boxer who got mentioned in the meeting. So we now have nine official nominees. Allow me a moment to explain why six of them should not receive consideration for anyone’s first-place vote:

Sergey Kovalev and Gennady Golovkin both went 4-0 with four knockouts, but neither beat anything resembling an elite opponent (Kovalev’s best competition was Nathan Cleverly; GGG’s was Matthew Macklin). Pelvic thrusts and hilarious butcherings of the English language do not make up for a thin résumé. The unrelated duo of Mikey Garcia and Danny Garcia both had excellent years, but the latter nearly came unraveled against Zab Judah, and the former’s biggest win came when he meekly settled for a technical decision rather than fight with a broken nose. Neither are capital crimes, but they’re enough to disqualify a man from Fighter of the Year consideration in 2013. Ruslan Provodnikov lost to Bradley. You’d better suffer a Bradley-Pacquiao-level robbery if you expect to go 1-1 and have a shot at Fighter of the Year. And Guillermo Rigondeaux … well, he had a pretty friggin’ good year. But I picture Huey Lewis telling him through a megaphone, “I’m afraid you’re just too darned boring.”

Mayweather is the safest choice. It’s the one I suspect most boxing writers and publications will make, in part because it’s the selection that leaves them least open to criticism. I was in the minority in picking Pavlik over Mayweather in ’07, and I made that choice because Mayweather performed below expectation in one of his two fights that year, the disappointingly close decision over an aging De La Hoya. This year, there is no such objection to his case. He fought nearly flawlessly twice and coasted to victory in the biggest event of the year. He’s the boring pick, in every imaginable way. But in what is almost a three-way coin flip for me, he’s probably the right pick.