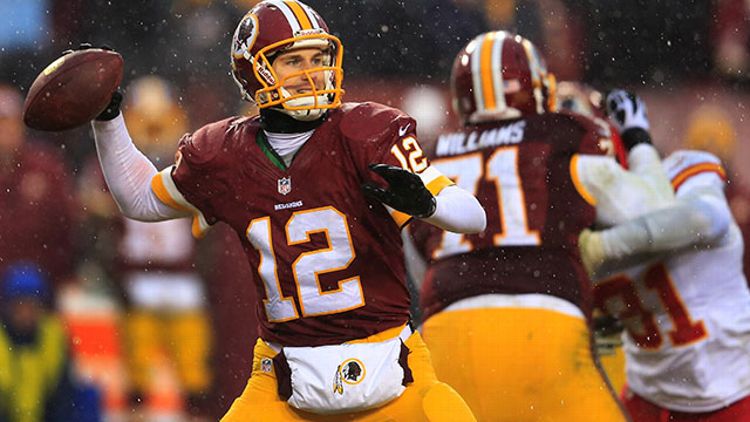 No franchise in the NFL is fueled by turmoil more consistently than Washington. Even for the fans who have suffered through the agonizing valleys of the Daniel Snyder era, this has been a particularly brutal season. The expectations produced by a stunning playoff run and a brilliant rookie season by Robert Griffin in 2012 have given way to a 3-10 campaign and a season-long debate over Griffin’s health. That discussion — and I’m being generous there — has now somehow merged with the possibility that Mike Shanahan will be fired before the 2014 season.

As the year has gone along, the calls to remove Griffin from the starting lineup have grown louder. Some of that revolves around the idea that Griffin is unhealthy and unable to perform at his previous level, an argument that isn’t supported by his cumulative performance this year. Almost all year, though, there has been a small but significant portion of the fan base and the circus surrounding the team that genuinely believes that Kirk Cousins deserves a chance to be the starter in Washington based upon his play in relief of Griffin. (Super Bowl–winning ex-coaches, too.) This has been coming, strangely, for a while.

Is Cousins really a viable option at quarterback? We don’t know a lot about his professional aptitude, and what we do know is less promising than it might seem.

Washington fans with sunny memories of Cousins’s work are almost surely remembering his performance in two games from December of last season. When Griffin suffered a knee injury after being hit by Ray Lewis and eventually had to limp out of a game against the Ravens, Cousins relieved him and completed two passes to score a touchdown before running a quarterback draw for the game-tying two-pointer. He then won the game in overtime, but that came on a drive that began with a 64-yard punt return to the Baltimore 24-yard line, at which point Cousins handed the ball off three times before Kai Forbath hit a game-winning field goal. Then, the following week, Cousins delivered an impressive performance in his only professional start, going 26-of-37 for 329 yards with two touchdown passes in a 38-21 victory over the Browns, a team that finished 20th in pass defense DVOA a year ago.

Cousins has four other performances on his résumé, all in relief of Griffin, often against superior defenses. He replaced an ailing Griffin against the Falcons and Seahawks last year, and mopped up late against the Broncos earlier this year before playing in the second half against Kansas City last week. Those games have produced significantly less impressive numbers:

That’s like going from 2012 Robert Griffin to 2013 Geno Smith; Cousins was great for that two-week stretch last December and has been borderline unplayable otherwise. What really stands out is his problem holding on to the ball; even including his good games, Cousins has thrown an interception or fumbled once every 11.4 touches (with a touch being a pass attempt, a sack, or a rushing attempt by Cousins himself). Griffin has coughed up the football once every 26.7 touches during his professional career. The numbers suggest that Cousins has serious work to do with making the right decisions and avoiding throws into coverage. Cousins’s biggest play as a pro, a 54-yard touchdown pass to Leonard Hankerson against the Browns, even came on a (very pretty) throw into triple coverage.

So, which stretch is the “real” Kirk Cousins? I’m hesitant to pick one. Of the two, I think you can make a stronger case that the start Cousins made against the Browns is more indicative of what he can do with the appropriate amount of preparation during the week before the game than, say, what he did moments after transitioning from clipboard holder to on-field quarterback. Research I’ve done in the past suggests that quarterbacks perform about 10 percent better as a starting quarterback than they do during the same season as backups, so that shouldn’t be a surprise. If anything, it’s probably best to just consider the entirety of his limited run as a pro passer, which is a relatively nondescript 83 pass attempts.

And, really, 83 pass attempts don’t tell us very much about what Cousins is at all. Remember Matt Flynn’s two-year run that saw him impress in a narrow loss to the Patriots and a win over the Lions? That was a 115-pass sample in which Flynn completed 63.5 percent of his passes and averaged 8.3 yards per attempt while throwing nine touchdowns. None of that stuck around once he left Green Bay, obviously.

What we don’t know about Cousins is far greater than what we do know about him based upon what we’ve seen from his small sample at the professional level. And while that’s the case it’s probably best to take the limited work we’ve seen and combine it with a healthy dollop of the perception surrounding Cousins before he signed with Washington, in order to gain insight into the sort of player he might be. In other words, after the league saw Cousins throw 1,128 passes during his time at Michigan State and had him run through their pre-draft processes, nobody thought it was worth spending a pick on Cousins before the fourth round. The process makes the wrong call on players all the time, of course, but there’s nowhere near enough evidence yet to suggest that Cousins is much more than your typical fourth-round pick. When Cousins gets more playing time, we’ll have a better idea of whether he’s actually a better quarterback than the process gave him credit for.

So, then, Washington is right to put Cousins into the lineup for the final three games of the year to see what they have with him, right? Not necessarily. It depends on what their endgame is. If they genuinely want to see if Cousins is a better quarterback than Griffin for the purposes of deciding whether they want to use Cousins as their long-term starter, then, yes, getting him as many reps as possible makes a lot of sense.

The more popular conception of why Washington wants to show off Cousins is as trade bait. And if that’s its goal, sticking him out there for the final three weeks of the season with a lame-duck coach and an offense that knows it isn’t exactly going to be exhibiting Cousins in his best light could end poorly for everyone. There might very well be a team in the league with fond memories of what Cousins did during that two-game stretch last December that values Cousins as more than the fourth-round level. If so — and you would have to figure Washington has received feelers from a few teams by now as to whether Cousins was available last offseason or would be available this upcoming offseason — you wouldn’t want to try to convince them otherwise by having Cousins play poorly to end the season. The line between showing Cousins off and exposing his flaws is very thin, and his last three appearances have been almost exclusively the latter.

And, finally, what should Washington accept as an appropriate bounty in return if it decided to trade Cousins after this season? Again, it’s not the sort of massive deal that Washington fans might have been hoping for after Cousins’s work against the Browns. After this season ends, Cousins will already be halfway through his rookie contract, which means the team acquiring him will only have two cost-controlled years with Cousins on its roster before it has to make a decision on giving him a new contract. In a draft that’s laden with quarterback prospects, that doesn’t seem quite as appealing as it did a year ago. My best guess is that Washington might be able to pick up a third-round pick for Cousins if he plays competently during his run at the end of the season and makes his way onto the trading block this offseason. More likely, it would get a fourth-round pick and a situational selection based upon whether Cousins emerges as a worthwhile starter. That might not seem like a good return for a player who looked like a spare star quarterback at moments last year, but when you look at the broader picture, there are far more questions surrounding Washington’s new starting quarterback than there are answers.