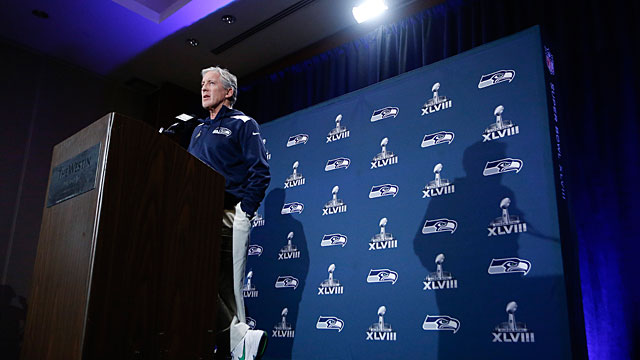 All the major Las Vegas sportsbooks currently have Denver favored by 2.5 points over Seattle — exactly where the spread settled an hour after Super Bowl odds opened. The 2014 version would be only the fifth Super Bowl ever with a spread of less than a field goal. The game’s competitiveness, a general upward trend in NFL betting, and the casual fan’s strong awareness of Peyton Manning have a vast majority of industry experts predicting this will be the biggest-bet Super Bowl ever. Multiple sportsbooks polled estimate that their betting handle is 20 percent ahead of last year’s record pace.

Upward of 90 percent of Super Bowl action in Las Vegas comes from recreational bettors (i.e., not professionals). The Super Bowl is the only American sporting event in which the odds are set with the average bettor as the primary consideration. For many, Sunday’s game will be their only sports bet this year. Such novices are attracted to familiarity, and no player in this game has close to the mainstream prominence of Peyton Manning. That’s one of the main reasons more than 70 percent of the bets made so far have backed the Broncos (according to the bet tracking tool at Pregame.com). This would be the 30th straight game Denver has been favored in — and supporters have been rewarded with a 25-4 straight-up and 20-9 ATS record during that span.

The continuing growth in “prop” bets is another key driver of the expected record Super Bowl handle. LVH’s Jay Kornegay tells me he expects more than half his overall action to be prop-bet related. Nevada books are limited to props that can be graded by a game box score, while online books are not limited in any fashion. Bovada.lv is renowned for offering outrageous props. This year, for example, you can bet on whether the power will go out during the game again (paying 20/1), or if it will snow (paying +200), or what the temperature will be at kickoff (over/under is 32 degrees, with early betting on the over). In addition, there are standards such as the length of time it takes to sing the national anthem (over/under is 2:25, with action on the under), and whom the MVP will thank first (“teammates” is a small favorite over “God”).

The average bettor prefers rooting for exciting plays, so they tend to bet “overs.” For example, there’s been strong optimism for Marshawn Lynch’s rushing yards, with the over/under bet up to 92.5 yards. The public also likes to root for quirky events. Sportsbook.ag is paying +130 if a non-offensive touchdown is scored — and the “yes” for this prop has attracted an astonishing 95 percent of the cash wagered on it. Another fan favorite is that there will be a safety (paying +550). Dave Mason from BetOnline.ag said, “The safety prop is always a huge sweat for the house.” Bettors are drawn to the simplicity and early action offered by the coin toss — generating the most action of any prop at many sportsbooks. For those wanting to handicap the toss: There have been 24 heads and 23 tails in the 47 prior Super Bowls. The NFC had won the toss 14 straight times before the AFC won the last two.

Due to the large overall betting handle, sportsbooks are more open to taking oversize individual bets. Southpoint’s Jimmy Vaccaro estimates 100 different bets of $100,000 or more will be placed in Nevada on this year’s Super Bowl. $1 million Super Bowl bets are not unheard of. So far, the sharps have mostly sat on the sidelines. Consensus opinion is that they are waiting to see if Seattle +3 is available at some point closer to kickoff. Regardless of whether they are able to get +3 or not, most believe the sharps will be on Seattle by game time. No matter who bets what or when they bet it, history tells us that the house usually wins. Nevada has kept separate Super Bowl accounting for 23 years — during that time, bettors have won twice, while the sportsbooks have won 21 times. 21-2, now that’s a noteworthy trend.