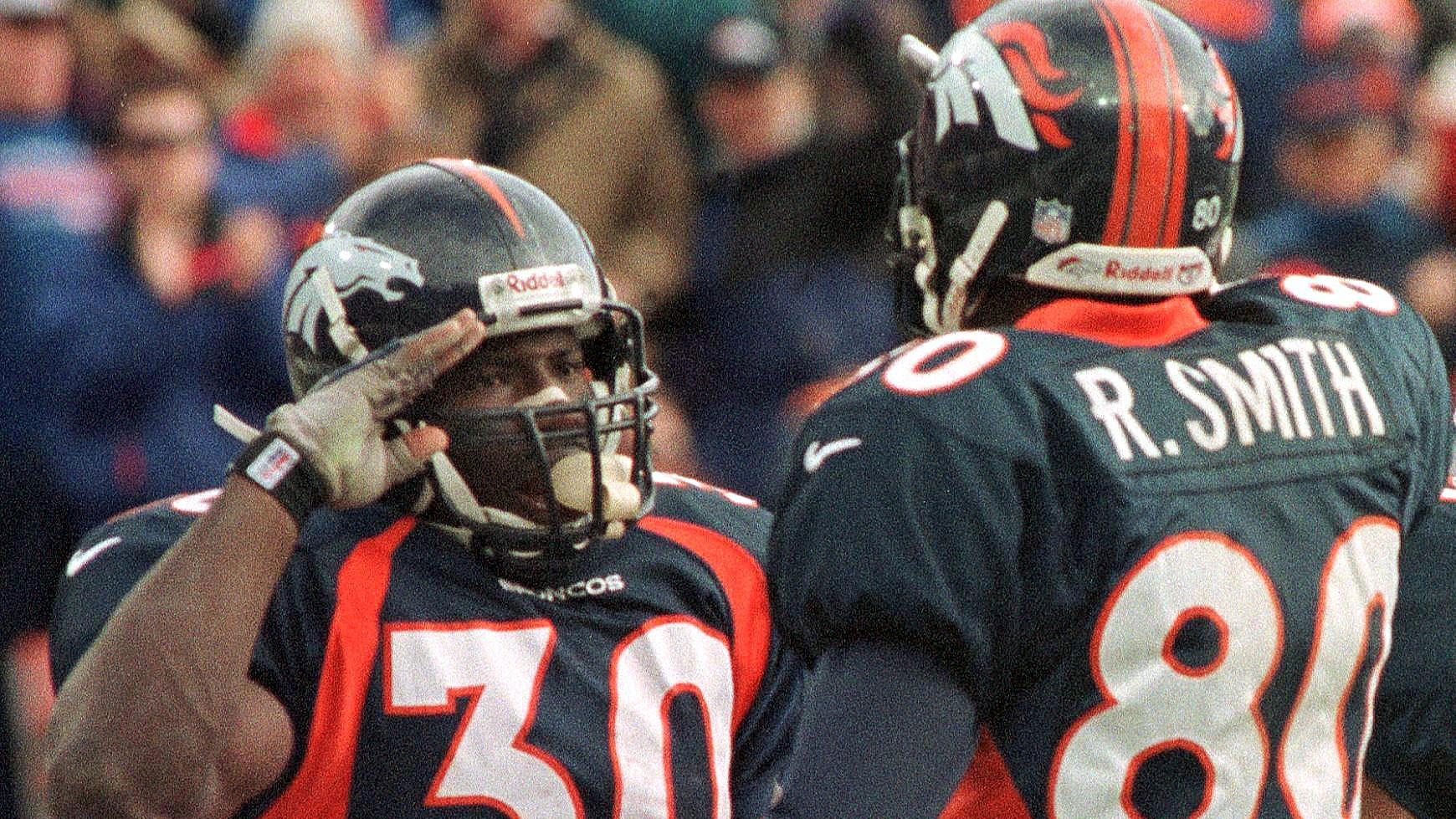 Sixteen years ago, Davis and the Broncos hosted Jacksonville in the wild-card round of the playoffs following the 1997 season. The Jaguars had ended Denver’s season the year before — a 30-27 shocker the Broncos were supposed to win by nearly two touchdowns. Mike Shanahan gave Davis the ball only 14 times in that game; it was a mistake he wouldn’t make again. This time, Davis gashed Jacksonville for 184 yards on 31 carries in a 42-17 Broncos win.

After one of those runs, Davis felt a sharp pain in his side. He’d learn later that one of his ribs was broken. The Broncos went 12-4 that year, which still wasn’t enough to edge out the Chiefs in the AFC West. A trip to the Super Bowl would mean two more games away from Mile High, and they’d have to do it with a running back that could barely move. “I couldn’t even breathe, couldn’t even hold the ball,” Davis says now. The next two weeks included trips to Kansas City and Pittsburgh — two places Denver had lost in the regular season and two of the best run defenses in football. Davis finished with a combined 51 runs for 240 yards and three touchdowns. By the time the Broncos got to the Super Bowl, they knew most of the work was done. “We were hardened, going through that stretch,” Davis says. “It didn’t matter who we played in the Super Bowl, on a neutral site.

“We just had a sense that [Green Bay] had never seen a team like us before, and they weren’t going to be quite ready for what we were going to bring. We were about as confident as a team could be without being cocky about it.” Davis continued his incredible run into the Super Bowl: 30 carries for 157 yards and three touchdowns on his way to being named the game’s MVP. The defending champion Packers, 11-point favorites, fell 31-24 in the Broncos’ first Super Bowl win.

Denver repeated the next year, and although the Broncos’ first trip back to the Super Bowl in 15 seasons is occasion to remember Davis, it isn’t the only one. Earlier this month, when the Hall of Fame cut its list of 25 semifinalists down to 15, Davis wasn’t on the list for the seventh consecutive year.

Tom Nalen knows all the Terrell Davis arguments. Some of them even make sense. Nalen, the Broncos’ center for Davis’s entire career, knows that the Hall of Fame appreciates longevity. He understands that the raw totals don’t stack up. “The one thing that I can’t get past is how well he played in the playoffs,” Nalen says. “If you look at the calendar year of 1998, where he had four playoff games, a Super Bowl MVP, and a 2,000-yard season, it’s hard to ignore that. No one’s done it better in my opinion.”

Davis’s MVP season in 1998 was a continuation of everything he’d done in the playoffs the year before. He ran for more than 125 yards per game for a Broncos team that looked next to unstoppable. Denver went 14-2 that year while scoring more than 30 points per game. The zone-blocking system championed by offensive line coach Alex Gibbs was tailored for a one-cut runner like Davis, and that year it was run almost to perfection. Nalen says that early on in Denver, the motivation for Davis and the line was to run the ball well enough to sway their pass-heavy head coach. By 1998, they hadn’t left him with much of a choice. “You can get a sense that it’s easy,” Davis says of the offense at its best. “You know it’s not, but it appears that way. Whatever you do, it’s like you can’t go wrong.” Any 2,000-yard season is a benchmark in history, but what Davis did as a part of that offense felt like something even harder to contain. With every lineman moving together in step, the Broncos could feel like a machine chewing up everything in their path on the way to the end zone.

That season and his two All-Pro years preceding it make for a compelling argument, but like Nalen says, what sets Davis apart is what he did after the regular season was over. Davis is, even with only three trips, the best postseason back in history. In eight career games, he finished with 204 carries for 1,140 yards and 12 touchdowns. That’s more than 142 yards per game. No one else has ever topped 111. If you average that to a full 16-game season, it would be the best season a running back has ever had. And he did it against only playoff teams. His seven 100-yard postseason games are tied with Emmitt Smith for the most, despite Davis playing in less than half as many games.

Davis was 26 when the 1998 season, the subsequent playoff romp, and his second Super Bowl trip were over. “At the rate I was going, you can say I wasn’t going to be able to run like that forever,” Davis says, “but I certainly had another three to four years. I wouldn’t even say at that level, but at a step behind that or so.” He pictured at least another two rushing titles, maybe a couple of more Super Bowls.

Four games into the next season, Davis tore both his MCL and his ACL. He’d follow that up with microfracture surgery and a stress fracture in his leg. In the next three seasons, he’d play just 17 total games, before finally retiring during the 2002 preseason.

That year, the Broncos picked a running back in the second round from Miami named Clinton Portis. In his rookie season, Portis rushed for more than 1,500 yards, and the case against Terrell Davis, Hall of Famer began. Portis wasn’t alone. Both Mike Anderson and Olandis Gary managed 1,000-yard seasons in Denver, and the notion caught on that the Broncos’ “system” deserved the credit. “I blocked for every one of those guys,” Nalen says. “There wasn’t anyone that compared to TD.” 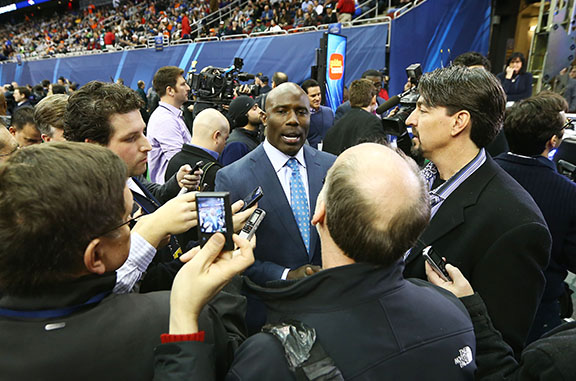 Davis, who is now an analyst on NFL Network, admits that he pays attention to the vote every year, that there’s a “wish in the back of your mind that maybe this is the year.” But it doesn’t haunt him. “It can only add to my career,” Davis says. “It can never take away from it.

“I don’t know what the process is like, what they’re looking for, what the criteria is. I have no clue. Not knowing that, it almost gives me more peace just to say, ‘I’ve done what I had to do.’ If they don’t see that [as] worthy of a Hall of Fame career, that is what it is. I know how I played.”

When the Hall of Fame debate comes up, one name is often paired with Davis’s: Gale Sayers. A Wichita native and Jayhawk star before coming to the Bears, Sayers already had a nickname that would prove to be one of the most prophetic in the history of sports. “The Kansas Comet” was exactly that — a flash of brilliance gone as quickly as it arrived. Sayers played in only 68 career games before injuries ended his career, but his time left a mark indelible enough to earn his place in Canton. Davis was his own NFL comet; his three virtuoso seasons compare to any stretch a running back has ever had, and his exclusion from the Hall poses a question about how we should value achievement in sports.

Jerome Bettis did make this year’s cut for the final 15. He finished his 13 seasons with more than 13,000 rushing yards, good for sixth most all-time. Yet in 13 years, he finished first-team All-Pro one less time than Davis did in seven seasons.

The voters have made it clear which career they would rather have. But asked to choose between a decade of 1,300-yard campaigns and his own football life, Davis didn’t balk.

“What I’m certain about is what happened in my career,” Davis says. “I know longevity is something people seek, and I know that is probably what voters look at, but I had four of the greatest years a running back could have on that level.