The Strange Story Behind Falcao’s Blockbuster Move to Monaco 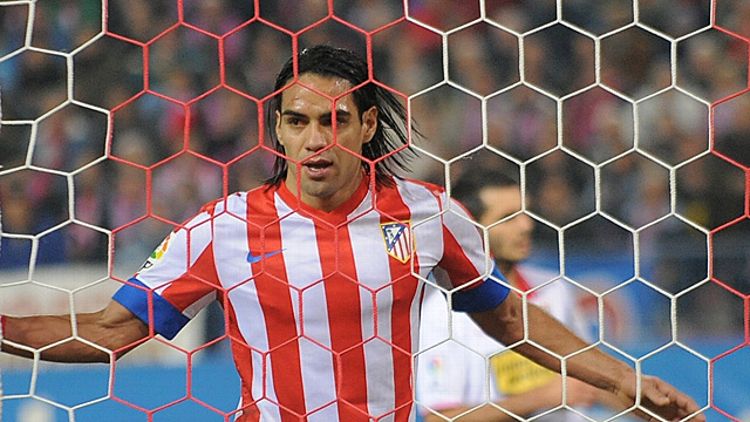 On first glance, AS Monaco’s about €60 million transfer purchase of Radamel Falcao seems like an example of the club’s relatively new owner, Dmitry Rybolovlev, following the blueprint of soccer’s other European nouveau riche.

Buy a club in a major European city, go on a spending spree, win stuff. Nobody ever claimed the plan required any kind of genius, it just requires money (and Rybolovlev has around $9 billion). It worked for PSG. It worked for Chelsea. And it worked for Manchester City.

In addition to taking Falcao off Atlético Madrid’s hands, Monaco has also written a €70 million novelty check this offseason to Porto for João Moutinho and James Rodriguez (Ricardo Carvalho came over from Real Madrid on a free transfer to make the average look a little less gaudy).

It’s not surprising that footballers, like pretty much everybody, make decisions about where to do their jobs based upon which employer is willing to pay them the most. Christ, Samuel Eto’o went to Dagestan. For Monaco’s newest employees, the risk isn’t getting shot, though. It’s playing. Or rather not playing in Ligue 1.

AS Monaco won France’s second division this past season, earning promotion to Ligue 1. But the league and the club are now involved in a game of administrative chicken. Because Monaco — while surrounded by France, it is a sovereign region — has no income tax, and a club owner with swollen pockets, the French clubs suddenly feel at a disadvantage in luring players. So, acting through the Ligue de Football Professionnel, they decided to limit Ligue 1 to teams whose headquarters were actually in France. That would mean AS Monaco would have to move its offices to a place where its players would be responsible for French taxes.

The club responded by taking legal action against the LFP. So currently there is no guarantee that AS Monaco will even be playing in Ligue 1 next season. The players will get paid regardless of which stratum of French football they are stuck in. So what do they care? But how Falcao ended up heading to Monaco might have less to do with his financial gain than with someone else’s.

That “someone else” is something called Doyen Sports, an organization whose purpose seems to be engaging in strangely worded corporate speak. To wit, this from its corporate website: “Doyen Sports Investments is a private fund dedicated, amongst other activities, to providing an important and growing alternative source of financing for football clubs and football PLCs. Soon support will be given directly also to some Leagues. Doyen Sports Investments chose Spain as entrance market due to the visibility and quality of the Spanish football.”

“Visibility and quality” is a really sweet euphemism for “shoddy financial management.” Lots of Spanish clubs not named Real Madrid or Barcelona are effectively broke on paper (or close to it).

Yet, they still want to be able to compete. Or at least compete for third place in La Liga. At the end of 2011, Atlético Madrid had debts of over €500 million on revenues of only €100 million, and had a tax debt alone of €115 million. Yet, in the middle of a financial meltdown, Atléti was able to go out and spend €40 million buying Falcao from Porto. How were they able to come up with the money to fund the most expensive transfer in the club’s history? Especially for the kind of player that could finally break the decade-long winless streak against their crosstown rivals and maybe even do it in, oh, like, the Copa del Rey final?

They didn’t. Well, they did beat Madrid in the Copa del Rey final. And they did it with Falcao on the pitch. Atlético just didn’t have all the money to buy Falcao. That’s where third-party Doyen Sports comes in.

It gets complicated. Quickly but generally, most instances of third-party ownership involve entities putting money up for promising young players so they can do things like eat and live. Young people whose families might not have the means to support their development sell off a piece of their futures to agents, investment groups, or people who can help them get to a higher level of soccer. In exchange for that piece, they might get their income supplemented, a better sponsorship deal, or simply moved to a bigger club. If and when that player makes it, the early-stage investors also get paid. It’s venture capital, only the investment is in people instead of widgets.

What went on with Madrid and Falcao is also equity financing but with, presumably, less risk. Falcao had helped FC Porto to a domestic cup, a league title, and a Europa League trophy while pouring in more than 40 goals. Not bad for two seasons’ worth of work. Point being he wasn’t some Portuguese-based mystery player (cough *Bebe* cough).

Now, let’s say you own a club in Madrid, but you are massively in debt, owe the taxman a hundred-plus million euros, and can only afford half of the €40 million price tag that Porto put on Falcao. So you get someone to supply you with the remaining money for the full fee. For fronting half the money, the investor keeps 50 percent of that player’s registration, so when the player is sold on — and in this scenario, you are going to sell the player on — the investor gets half the money.

That seems to be what Doyen is doing. It has an entire roster of players it has a partial interest in (including two more at Porto, Steven Defour and Eliaquim Mangala).

On the one hand, this is kind of cool. Many European clubs don’t have the financial muscle to compete for some of the better players coming in from abroad or coming up from second-tier leagues.

A good chunk of the approximately €60 million paid by Monaco doesn’t go to Madrid, but instead to Doyen. But it still probably worked out OK for the Colchoneros. They won the Copa del Rey, and did so at the expense of their rivals, Real Madrid. More importantly from a financial standpoint, Atléti finished third in La Liga, meaning they qualified for the Champions League for the first time since 2009, and with that get a guaranteed check — it’s €8.6 million just for showing up to the group stages — with the chance to earn a bigger payout.

On the other hand, as humans, we’re sort of put off by the idea of owning people — human rights, self-determination, and all the rest. It’s a view held by UEFA and its president, Michel Platini, as he said late last year, “I don’t think it’s very good if players from several teams belong to a financial company or belong to people. I think ethically, morally, it is not good.” UEFA has’t banned it though, obviously. In fact, it simply asked FIFA to deal with it. And, as we all know, FIFA’s record of taking on corruption and ethically questionable practices is pristine.

This opens up a whole other can of worms. Suppose a club with several third-party, minority-owned players runs into financial trouble. Maybe there are people with interests (those are financial interests) who maybe start influencing and forcing decisions that don’t have much to do with winning football matches. “Need money? OK, we’ve got this left back who we’d like to see get some more exposure.”

Something like this may or may not have already happened with Falcao, Atlético, and Porto.

The way the deal was structured, Atlético didn’t even pay the full €40 million up front. The club was on the hook for only €18 million of the total cost, and that was to be paid to Porto in two €9 million installments. By the summer of 2012, Atlético had paid only €6.5 million (plus possible bonuses). Porto was on the verge of filing a complaint with FIFA for nonpayment.

But something else happened around that time. Rixos Hotels, a luxury hotel chain primarily in Turkey, became the shirt sponsor for Atlético Madrid. Rixos is owned by the Doyen Group (of which Doyen Sports Investments Limited is a piece).

So Doyen owns part of Falcao. The people who own the rest can’t make a payment. And another subsidiary of Doyen is suddenly being advertised on the shirts of the people who can’t make the payment. It looks a bit suspicious, no?

The timing doesn’t really scream conspiracy. The kit deal was announced in April 2012. It wasn’t until four months later that Porto raised concerns that Madrid weren’t paying money owed. So the events are backward. Atléti claimed that they were simply waiting for Benfica to pay them money owed for a completely different deal. And because that money hadn’t arrived, they couldn’t pay Porto. And even if the kit deal was a sweetheart arrangement for a preferred partner Madrid were already in bed with, it might have still all been totally legit. But at the very least, it illustrates how easily a football club might be coerced into doing things simply because of who else they are involved with.

Where Atlético Madrid might not have been held up, Falcao almost certainly was. How much of the player Doyen owns is unknown. A request to Doyen looking for clarification on that (and other things) was unreturned. This link suggests it’s at 36 percent (and the shirt sponsor shenanigans may or may not have affected the deal). In any case, working back from the money Atlético didn’t pay (€22 million of €40 million), that would put Doyen’s piece at 55 percent, and that would give them controlling interest.

Because this is an investment, Doyen Sports is looking to maximize its return. There are only a few potential buyers to begin with. Manchester City, Chelsea, and even United are out because, again, the Premier League doesn’t allow for the transfer of third-party owned players. That leaves PSG, Real Madrid, and maybe Anzi Makhachkala. Let’s make a bad assumption and say that even investors won’t send an asset to Dagestan. PSG could probably use another striker — after Ibrahimovic and Lavezzi they literally have no other forwards listed on their squad right now — but seeing how they are actually registered in France, to match wages paid by Monaco (rumored at €10 million a year), they would have to pay around €18 million for Falcao to net out the same take-home pay after taxes (top marginal tax rate is 45 percent).

That leaves Real Madrid. They might very well have wanted the Colombian, but much like PSG, in order to match wages they would have had to increase pay to something above that €18 million range (top marginal tax rate in Spain is 52 percent). So let’s play make believe and suppose that Madrid wanted Falcao, but because matching wages would be so expensive, they were only going to match the total offer (transfer fee plus wages) put forth by Monaco. That means the transfer fee would be less than that of Monaco’s.

From Doyen’s perspective, it (possibly) put up €22 million and (possibly) pocketed about €12 million (net) two years later. That’s not bad.

From Falcao’s perspective, he is now the pawn in someone else’s financial gain. Hard to feel bad for a pawn who will be getting paid an awful lot of tax-free money to play a game in the Mediterranean playground for the rich. But, yeah, he might not have had much say in where he went. And as nice as Monaco is, it could have been Dagestan.