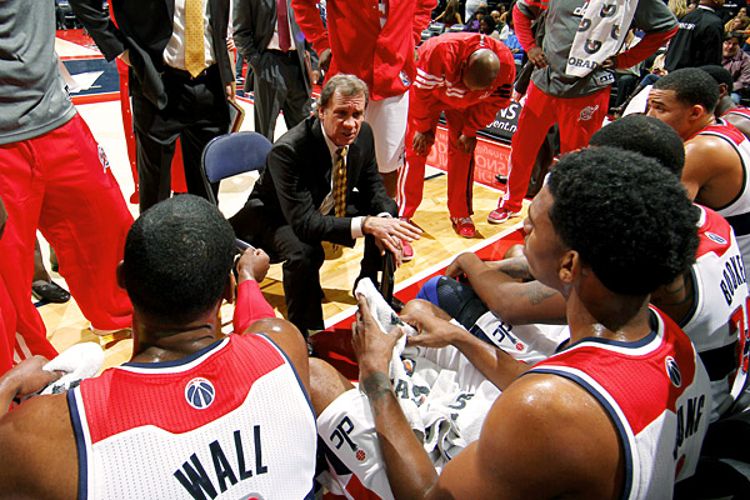 The State of the Washington Professional Basketball Team is … weird.

Weird even for a franchise that, over the past 30 days, inserted itself into the national sports consciousness with a highly effective combination of tone deafness and diabolically poor play (no citation necessary).

It’s weird because the past week contained more than a couple green shoots.

Starting January 16, the Almost-Bullets played five games in eight nights, beating one of the top three teams in the league, hanging in until the end against a top-five team, and really, genuinely competing in two of the other three. Upon further review, this might not be the very worst team in the history of the NBA — just one that belongs somewhere in the top 20.

The semblance of a recipe for “success” kind of popped up for the team with the worst ratio of hoops intelligence-to-effort through the first few weeks of the season: run, run early, run often, rebound the hell out of the frequent misses on the offensive end, and just be active on defense. I’m calling it EFF-RUN. It’s not rocket surgery that EFF-RUN might be an identity for an athletic and young team, and it is utterly unsurprising that the Dubya Pees are in the top half of the league in offensive rebounds and blocked shots. Equally unsurprising: The team’s competitive run happens to coincide with its franchise-cornerstone point guard apparently rediscovering his enthusiasm for the game and producing a sustained effort that has looked downright No. 1-Overall-Draft-Pick-ish.

Indeed, I caught the Oklahoma City and Denver games, and honestly, I enjoyed going to both of them. Like, REALLY enjoyed myself. The Oklahoma City game made no sense whatsoever, except in the only way that matters — the home team played hard all 48 minutes. (Seriously, if you took a quick look at the box score, and I told you that NBA futurist JaVale McGee missed four free throws inside the last three minutes, you would believe Peyton Manning will be the next quarterback for the Washington Redskins before you would accept that the WPBT won.) And the Denver game was entertaining because both teams shot the ball pretty well from 3-point land, John Wall played inspired defense against Ty Lawson (not one but TWO breathtaking blocked shots), and I saw Jan Vesely’s girlfriend live.

Let me throw this at you: If you look at a calendar for a “normal” season — you know, one that starts with a training camp and games in the fall, as opposed to this greed-induced cram-job — the fellas would have just played 10 to 12 actual games that count. Finding the EFF-RUN identity at this point in a “normal” season, while slightly disappointing, wouldn’t feel quite so egregious because it wouldn’t have FIFTEEN (15) losses associated with it. That’s a historical anomaly and bad luck. (Athough one can argue that the lockout had a healthy hand in stacking the odds against good luck.) Either way, it sure does feel familiar here in D.C.

Which brings us to the weirdness of Tuesday. I never fault a franchise for replacing a coach when the players have stopped listening. It happened here in late November with Bruce Boudreau and the CAPS; I hated to see f-cking Coach Bruce go because he did a great f-cking job with the f-cking guys, but it’s clear he wasn’t getting through anymore.

Maybe the same was true with Flip Saunders, but it sure didn’t look that way. Far be it from me to make excuses for a crew that used up a season’s worth of benefit-of-the-doubt the moment they tapped poor ‘Dray no. 7 to be the opening-night captain, but Monday’s low-energy no-show against the Sixers looked like a team playing its fifth game in eight nights. And against a team that is particularly well-suited to combat EFF-RUN because it is a much, much, much better version of that concept.

So it seemed … weird … to boot Flip after that game. Especially after the vote of confidence following the 0-8 start, the very blatant effort at playing for the draft, and the fact that the crew’s effort looked like it was turning a corner. All the same, I have a sneaking suspicion Flip isn’t heartbroken.

My fellow hoops-citizens, I end this State of Les Boulez with a check-in of our Constitution, the Book of Leonsis the Wise. It strikes me as no coincidence whatsoever that on the day the team’s coach was euthanized, the team’s owner declined comment to the media, was equally silent on the interwebs, but did post two separate links to renditions of Fugazi’s “Waiting Room” on his blog. My friends, check the lyrics and judge for yourself.

Seriously, don’t front, Ted. That sh-t is sacred to some of us. Function is the key.

Thank you. God bless you, and may God bless the continued enthusiasm of Steve Buckhantz and Phil Chenier.