The Passion of the Costas 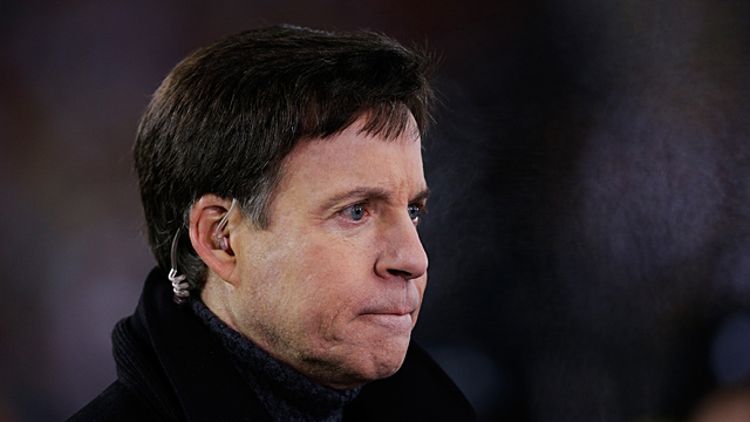 When Adam Scott rolled in a 12-foot birdie putt to win the Masters on Sunday, I heard The Voice. I hear it a lot when I’m watching sports. The Voice warns me that what’s exciting (a Scott–Angel Cabrera playoff) often obscures what’s morally revolting (a golf club with a lengthy history of racism and sexism). The Voice tells me I ought to cheer less and think more. The funny thing was, on Sunday, The Voice wasn’t coming from Taylor Branch, Dave Zirin, or any of the usual suspects. It was coming from Bob Costas.

On Friday, Costas went on Dan Patrick’s radio show and walloped CBS’s coverage of the Masters:

What no CBS commentator has ever alluded to, even in passing, even during a rain delay, even when there was time to do so, is Augusta’s history of racism and sexism. Even when people were protesting just outside the grounds — forget about taking a side — never acknowledging it. So not only would I never work the Masters because I’m not at CBS, but I’d have to say something and then I would be ejected.

Now, Costas wasn’t breaking new ground by calling Augusta National a corrupt institution. (The New York Times was accused of overdoing the point a decade ago.) But slamming the TV people — saying they’d prostrated themselves before golf officials — was pretty interesting. It wasn’t just Costas taking a swipe at Jim Nantz. It was Costas denouncing the kind of sportscaster he used to be.

To appreciate the transformation, you have to understand the Bob Costas of the 1980s. When he was hired by NBC, at the ripe age of 27, Costas had smarts, a deadpan delivery, and an encyclopedic memory of baseball that would rival Keith Olbermann’s. For a play-by-play man, that might have been enough. But as Costas ascended to become the host of hosts — of the Olympics, NBA Showtime, The NFL on NBC, and Later — some of us began to wonder what was behind that happy mug. Did he ever think uncomfortable thoughts about sports or was he just the best at throwing it to Marv Albert and Mike Fratello?

In 1989, Sports Illustrated noted that Costas’s idea of a controversial stand was reaming out an umpire for a blown call. Costas’s reply was telling. He explained to a crowd at a sports editors luncheon, “Nobody in his right mind wants to turn on the Game of the Week or a football game on Sunday and hear someone preach to him about all of the ills of the NCAA, or about everything that’s wrong with sports in America.” Costas wasn’t putting away all his journalistic tools. He was saying when the network promises the Game of the Week, it should deliver the Game of the Week, minus the politics.

It’s worth noting this was an attitude shared by most sportscasters. Even Howard Cosell, the model of a TV muckraker, was usually happy to entertain on Monday Night Football. He’d save the real digs for his radio commentaries or his magazine show, ABC SportsBeat.

By the 1990s, Costas was starting to get restless. He joined the big brains (John Thorn, Stephen Jay Gould) on Ken Burns’s Baseball miniseries. He blurbed more than 50 books and wrote one of his own. “I’ve learned that calling a ball game is not the time for an extended examination of baseball’s economics, or all the ways that the wild card alters our perception of the regular season,” Costas wrote in Fair Ball. The book would be a chance to break free of TV’s cheerleading, to dig in and take some whacks.

But the book Costas produced was “a fan’s case for baseball.” (The italics were his.) It was a wonky tract that argued the beleaguered sport could be saved. Even though Costas stumped for ideas Don Fehr and Bud Selig hated — a cap on player salaries, more radical revenue sharing — it wasn’t a book that was going to get Fehr or Selig to stop returning his calls.

Beginning in 1995, Costas had a telling series of encounters with New York Times sports columnist Robert Lipsyte. Lipsyte was the anti-Costas. His Times editor once said he was “on the peninsula” — meaning he ventured out on ground others wouldn’t. As Lipsyte wrote in his memoir, he and Costas argued about just what it meant to be a sports journalist. Costas told Lipsyte he should let go and cheer once in a while. Lipsyte countered that Costas hadn’t used his Q rating to stump for change. It was like seeing two distinct career paths carved out, one leading straight down the middle of the fairway and the other into heavy rough.

It was also clear Costas wanted gravitas. He proceeded in fits and starts. In 2007, Costas went on his radio show and called George W. Bush’s presidency a “tragically failed administration.” A year later, when he sat next to Bush at the Beijing Olympics, Costas quizzed him on China’s human-rights record and Russia’s invasion of Georgia. Blogger Matthew Yglesias said Costas’s interview was better than what you usually see on Meet the Press.

The 2012 Olympics showed the twin impulses tugging at Costas. During NBC’s coverage of the parade of nations, he cracked jokes about Idi Amin and Borat. A British paper lumped him in with #NBCFail. Yet when the Israeli team entered, Costas zinged the International Olympic Committee for not properly honoring the 40th anniversary of the Munich massacre. Costas then observed his own 12 seconds of silence on-air. It was a stunt Cosell would have been proud to call his own.

After Jovan Belcher’s murder-suicide in December, Costas ventured further out on the peninsula. He’d read a column on gun culture by Jason Whitlock, was moved by it, and decided to add his own heft and platform. I was watching Sunday Night Football. I usually interpret the halftime code words — i.e., “revealing interview” — as a cue to find something on the Internet. But as Costas skewered the cliché of “putting it all in perspective,” as he suggested the real problem was Belcher having a gun, I found myself glued to the TV. Costas was like an earnest version of Jon Stewart. He later told Whitlock that he chose to speak out on Sunday Night Football, rather than his NBC Sports Network show, to ensure a maximum audience.

Costas wobbled a little the next day, saying he hadn’t expressed his full, nuanced position because of time constraints. (When he wobbled again Friday on Bill Maher’s Real Time, Maher said, “For fuck’s sake, you’re not running for president!”) But Costas also nuked the idea that he couldn’t talk about politics during a big game. “If I had come on and said, ‘Well, it was a tragedy in Kansas City but let’s not misunderstand: Only people commit murders, guns do not, etc., etc.,’ then they would have stood up and applauded me,” Costas said of his critics. “And there wouldn’t have been anything about how inappropriate it was to interject politics, as they see it, into halftime.”

He added, “To launch personal attacks, or to say it’s not appropriate to make these remarks, I mean, I don’t pay any attention to that.” Notice that this declaration is an about-face from his line back in 1989.

When he took on CBS last week, Costas dug in even deeper. After pointing out the network’s indifference to Augusta’s sleazy history, he said:

I think that somebody should have had the guts to do it at some point along the way. Broadcaster, executive, somebody should have said to someone at Augusta, ‘Look, this is an issue. And this is not Nightline or Meet the Press, we understand that. But this is an issue. And it’s an elephant in the room. And we’re going to address it as concisely as we can but we’re going to address it so that our heads are not in the collective sand trap.

Now, Charles P. Pierce has noted that Costas’s gun-control spiel is hardly the work of a leftist. And merely calling Augusta discriminatory is no longer revolutionary, if it ever was. I’d just note there’s a value in repeating the basic facts of the case. If the reminder comes from someone with Costas’s massive audience, all the better. That’s how The Voice gets into our heads, and how it stays there even when the golf gets exciting.

Filed Under: CBS, Golf, The Voice

The Accidental Awesomeness of the New York Knicks' Small-Ball Lineup