The Accidental Awesomeness of the New York Knicks’ Small-Ball Lineup 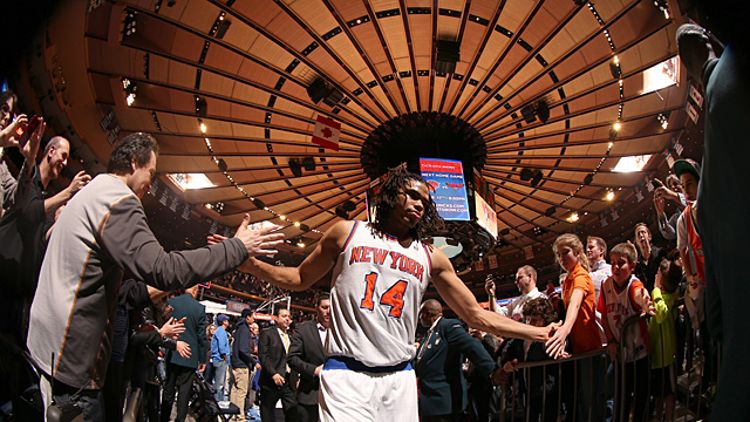 They say that necessity is the mother of invention. That might as well be the motto for the Carmelo Anthony–era New York Knicks. Over the past two seasons, the team has been forced to adjust to a seemingly endless string of injuries. Amid the constant lineup shuffling, the Knicks have stumbled onto an identity that’s made them the best version of themselves.

Because of the absence of traditional big men, namely Amar’e Stoudemire, New York has fielded more lineups that pair Anthony and All-Star center Tyson Chandler in the same frontcourt, surrounding them with a rotating cast of shooters spreading the floor. It’s allowed the team to capitalize on the most precious commodity in the league today — space.

The goal of any NBA team, particularly one with an elite scorer like Anthony, is to try to make the game as much of a one-on-one contest as possible. Before the defensive three-second rule came about in 2001, the league’s rules allowed great individual talents like Michael Jordan and a host of dominant post players to shine. Nowadays, the only way to re-create that scenario is by using lineups with as many capable floor-spacers as possible, forcing teams to play stars like Anthony with a lone defender or risk giving up more efficient shots to other players.

That the Knicks are better with Anthony as a 4 isn’t exactly breaking news. But with an array of injuries afflicting the Knicks’ traditional big men (Chandler’s bulging disc, Rasheed Wallace’s stress fracture), head coach Mike Woodson has been forced to get creative. His solution, at times, has been to use his sweet-shooting, 28-year-old rookie, Chris Copeland, as an undersize center for small stretches in both the starting and reserve units. This recent twist, born of necessity, has taken the Knicks’ spread attack to a new and potentially terrifying level.

Though the sample size has been microscopic, these ultra-offense lineups have demolished opponents over the past few weeks:

KNICKS BY THE NUMBERS

What’s made these units surprisingly effective is the play of the unheralded Copeland. Not many 6-foot-8, 225-pound wings would subject themselves to the physical punishment that comes with battling opposing NBA centers, but Copeland has shown a willingness to tussle with bigger foes. Sunday’s clash with Indiana’s Roy Hibbert was a prime example. Copeland put in a tremendous effort on defense, allowing the Knicks to keep their advantage on the offensive end of the floor.

And the offensive end of the floor is where Copeland really shines. The rookie will often begin most possessions diving hard off a pick-and-roll. This is the Chandler role, and it’s a vitally important one for a team’s offense. That cut through the paint forces defenses to collapse and jam Copeland. What makes him unique as a 5, however, is that instead of loitering around the basket looking for putbacks on dribble penetration — something that can often create a cluster of players around the rim — Copeland spaces out toward the perimeter:

The ability to put another floor-spacer on the court also helps when the Knicks’ original attacks break down. If their first few actions occur without a shot, the team just spreads the floor and allows perimeter players like Shumpert, Felton, or Anthony to exploit huge driving gaps:

Even though the Knicks were in a bit of disarray before Shumpert’s drive, two things allow for his uncontested layup: David West’s frantic attempt to stay close to Copeland, and Jeff Pendergraph, Indiana’s other big, being unable to help off Steve Novak in the corner.

Now while these numbers look rather gaudy in this limited sample size (especially given that some of them are inflated by a hot-shooting stretch against the Pacers), it doesn’t mean they’re useless. Ideally, you’d like to have the ability to pore over endless amounts of data until you have enough to reach a solid conclusion. But NBA teams, especially when it comes to lineups, don’t often have that luxury. Projection and, most importantly, the ability to make deductions from incomplete amounts of information, is sometimes a necessary requirement.

This certainly applies to the Knicks’ current situation. Subjectively, it’s easy to assess that these lineups, if used for extended periods, will have serious deficiencies on the glass and on the defensive end of the floor. But as the early returns show, these ultra-small lineups might be able to produce a quick jolt for a team’s offense when used in moderation.

The Knicks might have found this Copeland-centered lineup through necessity, but now it’s time for them to put this invention to good use.

The Passion of the Costas