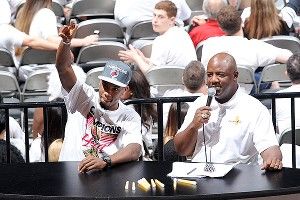 Last Thursday, the Miami Heat won the NBA championship, beating the Oklahoma City Thunder in five games. This triggered a series of celebrations among the Heat players, Heat fans, and people who want to be on the Internet. These are the videos of those celebrations.

IS THIS A ROAST? I’m dead. I have no more breaths to breathe.
— Rembert Browne

Shout-out to the guy screaming “WorldStarHipHop!” over and over. Maybe one day, when the Bucks win the 2019 NBA Finals, someone in Milwaukee will be screaming “GRANTLAAAAAAAND!”
— Chris Ryan

I think it’s about time we start celebrating Juwan Howard’s elder-statesman role in the NBA, instead of teasing him for being such an Old Man River. Yes, at times, it’s hard to defend Juwan when he steps on the court and doesn’t do much, but when it comes to his off-the-court presence, coupled with his age, he’s truly a beautiful creature.

What took place at the Miami Heat championship celebration on Monday illustrates this point perfectly.

I’m just upset that Juwan didn’t break out the rest of the dance moves I know he has in his “I was Norris Cole’s age in the early ’90s” arsenal. You know, like the ones his occasional doppelganger taught us.

And the Birthday Party Running Man:

And, of course, the Bedroom Proud Mary:

Someone keep a camera on this man. When Juwan is expressing himself through the art of dance, we need to be there, cheering him on.
— Rembert Browne

You know what? Why don’t you just let this guy with the towel on his head arrive at the parade when he wants and determine for himself whether he is early or not?
— Chris Ryan

The Only Thing Keeping Mike Miller Alive Are His Shorts

This dude thanks Pat Riley for not “putting me behind the barn and putting me to sleep.”
— Chris Ryan

First, the music playing over this clip …

I personally guarantee you these dudes were listening to something more like Gunplay or Big K.R.I.T. or whatever. The only Vengaboys-type jams you’re going to hear in the Heat locker room are on Dexter Pittman’s iPod. + 1 snark points for whoever did this.