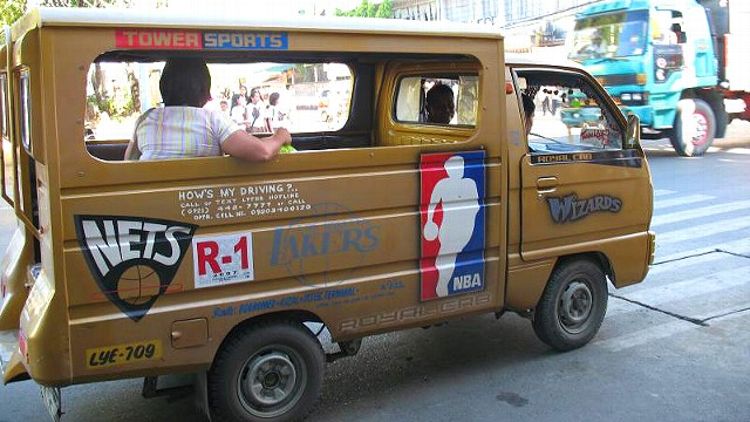 When David Stern’s magnanimous grin flashed across an LED jumbotron in metro Manila Monday afternoon to announce that “the NBA will play its first preseason game in the Philippines this October,” a pulse of enthusiasm shot through Filipino communities from Mandaluyong City to Riyadh, Saudi Arabia, to Daly City, California. Basketball has been the most popular team sport in the Philippines for generations, and it’s one of a handful of nations, alongside Lithuania and a few others, where the game is part of the bedrock of local culture. Yet even though the Philippines is a place where commuters regularly ride in multicabs and jeepneys decorated with NBA team logos and Jerry West’s iconic silhouette, the league has never brought its product there. For many Filipinos, the news that the Houston Rockets and Indiana Pacers will play a preseason game October 10 at Metro Manila’s Mall of Asia Arena was a proud moment. Finally, the NBA — the league that served as a model for the Philippines’ 38-year-old PBA — will recognize Filipinos’ love for the game. For the first time since eight players from the 1979 Washington Bullets visited Manila to play a PBA all-star selection (and Dave Corzine almost got into a fistfight with a local legend, 6-foot-1 shooting guard Atoy “the Fortune Cookie” Co), real NBA teams would be playing on Philippine soil.

Of course, the NBA has long been aware of basketball’s appeal to Filipinos. They know that more than 30 regular season games a week are aired on various Philippine television stations, and they know that outside of the United States, the NBA gets more social media “likes” and “follows” from the Philippines than from any other country. They know that more people from Manila have liked the Miami Heat’s Facebook page than people from Miami. The league has sponsored regional basketball camps in the Philippines through its Jr. NBA program and has shipped in legendary retirees like Chris Webber and Gary Payton to play exhibition games.

So why did 19 other countries outside the States host 138 preseason and regular season NBA games before the Philippines got its moment? A cynic might suggest that David Stern’s roundball-thumping crusade to spread the NBA to global markets didn’t need to prioritize a country where “the ambition of every healthy boy now is to be a basketball player” — or so said Ambrosio Padilla, captain of the Philippines’ first Olympic basketball team, in a 1933 edition of the magazine Philippine Graphic. But on a more practical level, Manila hadn’t been a candidate to host an NBA game for a reason that should be familiar to beleaguered fans in Seattle. Until last year, the Philippines lacked an NBA-ready arena. The arena where the PBA plays most of its games, the Smart Araneta Coliseum, has history and gravitas — Muhammad Ali fought Joe Frazier there in the Thrilla in Manila — but it doesn’t have luxury suites. Araneta’s spartan locker rooms might make Chandler Parsons or Paul George feel yucky (especially if someone tells them how many times the same space has been used for cockfighting derbies). Metro Manila’s other frequent PBA host, the Cuneta Astrodome — well, the last time I was there, a few years ago, they still had signs on the wall that read NO SPITTING.

But if you spill 3.6 billion pesos (close to $90 million by today’s exchange rate) to build an NBA-ready arena, the league will come. Cue the SM Group, run by Filipino-Chinese taipan Henry Sy, who is officially the Philippines’ richest man. Sy’s son Hans spearheaded the construction of the Mall of Asia Arena, which has a brand-new floor, baskets by Spalding, LED screens ribboning around the third and fifth levels of the arena, a sick jumbotron, and, of course, 41 VIP suites. It opened in 2012 and it’s NBA-ready.

Now, it’s easy to raise an eyebrow at partnerships between men like David Stern and Hans Sy or Clay Bennett and dismiss it all as a rich-get-richer circle jerk, but in the case of MOA Arena bringing the NBA to Manila, that would be unfair. Wealth may not trickle down (especially in the Philippines, where the Sy family and 39 other dynasties account for 76 percent of the country’s gross domestic product), but basketball-related benefits are more likely to spread across class borders. Most of the hundreds or very possibly thousands of people who crowd into the MOA Arena parking lot on October 10 won’t be able to afford tickets to the game, and they’ll probably never see the Rockets host the Pacers in Houston. But the chance to watch Jeremy Lin and James Harden disembark from the team bus before a real NBA game; the chance to scrap to the front of the line and maybe get a high five from Kevin McHale; or the chance to get close enough to Roy Hibbert to measure your height somewhere against his midsection — those are stories people will remember for a lifetime. This new arena and the NBA are making that possible.

What’s funny about Manila’s need for an NBA-ready arena is that many of the most powerful expressions of the Philippine obsession with basketball come in the form of homemade courts that show how committed Pinoys are to the game. These courts aren’t anything close to NBA-ready; some look like they’re not even trash-heap-ready. They are 8-foot transportable hoops that groups of boys carry around, looking for open street corners to set up games of three-on-three. They are half-court patches of dirt where a backboard of five wooden planks have been lashed to a tree trunk. They are burnt-out, abandoned hotels whose second-floor ballrooms have been converted into full courts by informal settlers who’ve re-claimed the ruins.

Along with the Rockets-Pacers news, another basketball-related link has been passed through Philippine social media circles this week. If a new, state-of-the-art arena and the NBA are on one side of the spectrum of Filipinos’ devotion to basketball, this video shows the other. It’s a group of Filipino migrant workers on contract in the Middle East (the man holding the camera says they’re in Saudi Arabia), playing a full-court pickup game. Only they don’t have a full court to play on. They have one long wall with two baskets about 50 feet apart on the same side of the structure. So what do they do? They run back and forth along the wall, each team shooting on a separate goal, in one of the strangest, loveliest basketball games I’ve seen in a long time.

When the Rockets and Pacers visit Manila, this is the side of Philippine basketball I hope they catch a glimpse of — the drive to play under almost any circumstances and by any means necessary. So while Filipino fans can be proud that the NBA finally came to them, the NBA — or at least of a few of its employees — might be able to leave Manila with a better understanding of how little an NBA-ready arena matters when people truly love the game.