The Most Ridiculous Medal Record in Olympic History Still Stands 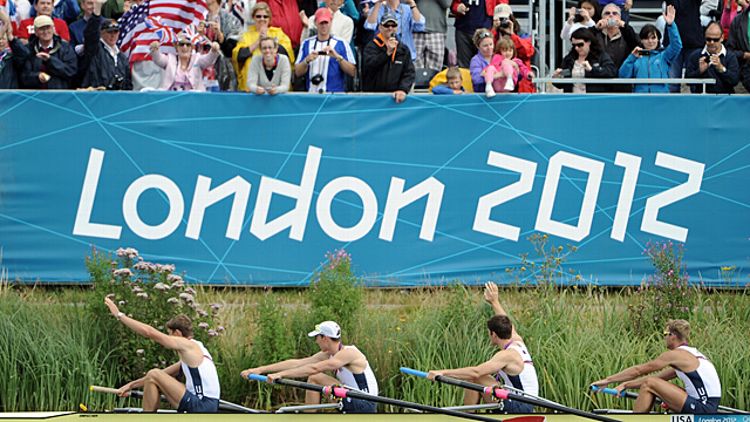 The last race at Eton Dorney not only put the cap on a disappointing Olympic Regatta for the U.S. men’s rowing squad — the priority boat of the four took just a bronze in that race — it also assured that one of the most ridiculous medal records in Olympic history will stay on the books for at least another four years.

In 1968 the East German pair of Jörg Lucke and Heinz-Jürgen Bothe surged past American gold-medal favorites Tony Johnson and Larry Hough on the very last stroke of the race to win the country’s first rowing gold medal. The East Germans weren’t even considered medal contenders going into the games. Johnson and Hough had only lost once in the preceding two years (said Hough years later, “I count that on a very short list of huge disappointments in life”).

The East Germans would similarly shovel disappointment on scores of other rowers as, over the course of just five Olympiads — Mexico City, Munich, Montreal, Moscow, and Seoul (the GDR boycotted L.A. in ’84) — they would take home 33 gold medals in rowing. The Americans’ inability to add a second win to that of the Women’s Open 8+ in London leaves them stuck in second all-time with 32.

To put what the GDR did on the water in an even more remarkable light, if possible, the U.S. has been contesting rowing events since they were first added to the Olympic program in 1900. That’s 26 tries. To five. East Germany hasn’t even existed since 1990, and we’re still second.

The centerpiece of the East Germans’ dominance came in Moscow when, of the physical gold medals handed out (i.e., nine medals get awarded for the winning 8+), the GDR took home 50 of 54 possible. That’s 92.6 percent of them. It was Communist Groundhog Day. Granted, it was assisted by the U.S.-led boycott, but no one country has ever so thoroughly dominated a single discipline at a single Olympics. Or ever will again. Maybe. I can’t be bothered to go look up the history of results in, say, dressage.

From the time they were recognized by the IOC in 1968, the East Germans had training methods — biomechanicists, sports scientists, nutritionists, and exercise physiologists — that were way ahead of the rest of the world. There is even a legend that, when the East German equipment engineers found out the rowing course in Montreal was going to be shallower than what the sport’s governing body allowed, they designed new shells specifically for the different depths.

Of course, the drugs helped too. In 2006, the German Olympic Sports Federation accepted the moral responsibility for the GDR having systematically doped some 10,000 East German athletes in an attempt to turn the smallish central European country into an athletic power. It would be incredible not to think that included many if not all of the rowers.

But it worked. And it worked well. Roughly 22 years after it no longer exists, the GDR is still the greatest Olympic rowing nation ever. And will be for at least four more years.