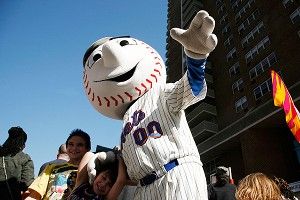 As a parent, I have two goals: to keep my kids alive until they’re old enough to walk away from the house for good, and to firmly instill a sense of love and loyalty they will take with them wherever they go.

An Oprah-esque plan for sure, but I found out this past weekend that these two goals can sometimes conflict. Like when you want to strangle your kid to death for one of his devout allegiances.

My oldest son, Archie, is 6 years old. He — like his father and his father before him — roots for the New York Mets. It doesn’t matter that the local team who all his classmates pull for has the best record in baseball. Archie is a Mets fan. It’s his permanent chore. That’s part of our deal. I take out the garbage. He roots for a team his father grew up liking three decades ago that plays its home games 2,500 miles away.

It’s not that bad. We have the Major League Baseball package at home with most of the Mets games at our disposal. Archie’s favorite player, David Wright, is hitting close to .400 this year and the team is made up mostly of an overachieving plucky bunch of no-names — so lately the designated chore has been somewhat enjoyable.

Archie’s love for the Mets extends beyond the major leagues. This is where issues set in. Last year, when he made the 5-year-old All-Star team, he avoided his Yankee teammates. He sat all the way on the other side of the bench and didn’t speak to one of them. His loyalty is boundless and, at times, senseless.

That’s why when I looked at the schedule last Friday night and saw that the next day Archie’s little league team, the Orioles, was playing against a team called the Mets, I knew there was going to be a problem.

I opted not to tell Archie the potentially devastating news until we got to the field. As far as I’m concerned, the equally devastating news was realizing the game is played at 8 a.m. on a Saturday. Any Little League parent is familiar with the process. In order to make it to the field 15 minutes early for stretching, factoring in time for getting you and the kid dressed, feeding him, and setting aside 40 minutes to track down his glove and pouch of Big League Chew, you’re looking at a 6:30 a.m. wake-up call for an 8 a.m. start.

So I’m already exhausted and spirits are low when we pull up to the field and I hear Archie let out an “oh dang it.” (That’s the clean and appropriate reaction for 6-year-old when things aren’t going his way.)

Me: What’s the matter?
Archie: Nothing.

I know what the problem is, but I don’t push it. Archie doesn’t want to play against the Mets — even the shrunken-down version.

Fast-forward past the kiddy calisthenics to the top of the first inning. Archie’s team is batting. Now, in a coach-pitch league, everyone gets as many swings as it takes to hit the ball. I’ve actually seen instances where while trying to make contact, kids grow out of their uniforms and sign up for a paper route.

Archie usually doesn’t have a problem with this. He’s one of the biggest kids on his team and consistently makes pretty good contact thanks to an overbearing father and a lot of practice hitting against a pitching machine provided by his generous cousin Jimmy.

His coach, throwing from a knee, tosses one right over the plate. Archie takes it. Coach throws another one down the middle. Again Archie takes. Not sure what he’s doing at this point, because in coach-pitch, there are no walks and no called strikeouts.

“C’mon Arch — be a hitter!” I exclaim anxiously.

Archie steps out of the batter’s box — takes a deep breath — gets set, and on the third pitch, halfheartedly hits a dribbler to third base. The ball went about as far as it would’ve if pregnant Snooki used a wiffle bat to hit a stuffed manicotti shell.

It slowly trickles down the line where, ironically, the miniature Mets third baseman Buckners the ball, allowing Archie to safely reach first base.

I was pretty sure I knew what happened. He felt bad about doing well against his favorite team in real life. As if somehow his success with the Little League version of the Orioles could have retroactively stripped the real Mets of their first World Series championship against the real Baltimore Orioles in ’69.

I couldn’t wait to confirm this. I was coaching third base at the time, and no matter what, when Archie got to me, I was giving him the hold sign so that we could have this much-anticipated conversation. He knew it was coming, too. When he finally reached the other side of the diamond, here’s how that conversation went:

Me: Hey, buddy, what was that at-bat all about?
Archie: What do you mean?
Me: You know what I mean.
Archie: Well, I didn’t swing hard because I don’t want to beat the Mets.
Me: Well, this isn’t the real Mets and we drove out here at eight in the morning and you only get three swings per Saturday, so do me a favor and make them count and don’t worry so much about beating the fake Mets.
Archie [Raising his voice.]: Oh — I knew you were going to say that.

At this point, everyone is watching our back-and-forth. It had all the makings of Billy Martin chewing out Reggie Jackson in a Fenway Park dugout circa ‘77 — if we were in Boston and Reggie was in fact Billy’s son.

The childish argument involving only one child was quickly derailed as the next 6-year-old singled to right field and Archie (against his better judgment) scampered home.

After the game we eventually came to an understanding. Archie would try his hardest no matter what the other team was called, and I would try not to be such an asshole.

So far it’s working, as I haven’t heard a “dang it” since Saturday.