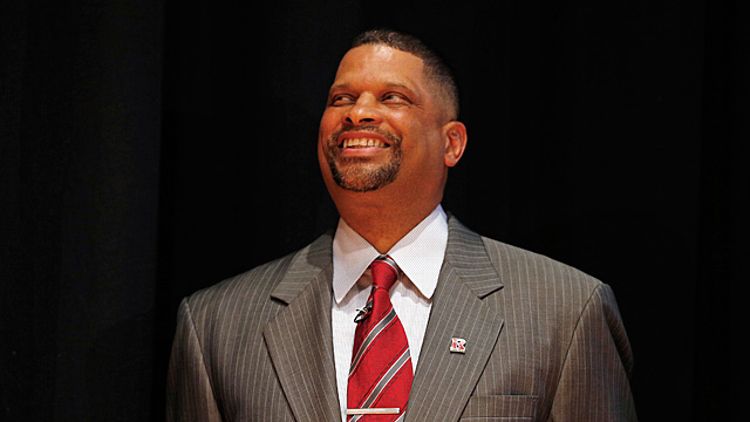 There may come a time when you walk into a seven-figure job interview with as much leverage as Eddie Jordan did upon meeting with the Rutgers athletic department. But I seriously, seriously doubt it. For starters, wanting the Rutgers men’s basketball job makes you a prime candidate for the position, considering the team’s legacy over the past two decades boils down to Quincy Douby, failing to make the NCAA tournament every single year since 1991, and, unlike Northwestern, failing to produce enough sportswriters to make a huge deal about that streak.

Rutgers just fired a guy who was the kind of asshole that winged basketballs at his players’ heads and called them names because, well, those crunch-time points in a 53-49 game against South Florida aren’t going to score themselves. This is the same guy who was dumb enough to allow his practices to be taped, wholeheartedly believing that his tactics wouldn’t inspire some disgruntled employee to go rogue and broadcast that stuff the very moment he had a chance.

So you could forgive Jordan for being a bit cavalier in his application process. We all lie on résumés, and some are bigger than others. In fact, the ability to stretch, finagle, and massage the truth is probably more important for a major college basketball coach than X’s and O’s. But you gotta hand it to Jordan for fronting on the most amazing, audacious, “I wish you would” lie imaginable: dude lied to Rutgers about graduating from Rutgers. As if they throw out student records like receipts from old tax returns or something.

But should they be so quick to rush to judgment? Let’s be real, unless you’re like a doctor or an engineer, a college degree mostly suggests you have the computer skills and attention span to limit your Internet browsing to about six hours a day so you can complete the hour of actual work most 9-to-5s actually require and still have time for lunch. Jordan turned a starting five of Gilbert Arenas, Larry Hughes, Antawn Jamison, Brendan Haywood, and Jared Jeffries into a playoff team, and you’re giving him crap for not turning in paperwork?

If you’ve ascended to a head coaching gig in Divison I, you’ve got some skeletons in your closet at best, actual bodies at worst. What other secrets are the stewards of men’s basketball hiding?

King Rice, Monmouth: Goes to the dealership, but he never cops nothing.

Gregg Nibert, Presbyterian: “Gregg Nibert” is actually a man who died in 1992, but Presbyterian has hired six coaches since then who have taken the name to save money on business cards and other administrative expenses.

Tony Bennett, Virginia: Thinks it’s cute to use “dropped out of space camp” on his OkCupid profile, when in actuality, he was the valedictorian of the 1994 class of Space Camp Florida.

Dave Loos, Austin Peay: Racked up $55 worth of late fees after renting Belly from the Clarksville, Tennessee, Blockbuster and was totally going to return it, but now that the Blockbuster shut down, he wonders if he still has to pay.

Tyler Geving, Portland State: Believes The Wire is neither overrated nor underrated.

Bill Coen, Northeastern: So tired of people complaining about the first Arrested Development album beating Slanted and Enchanted in the 1992 Pazz & Jop poll, that he voted Zingalamaduni no. 1 on his 1994 ballot out of spite.

Chris Mack, Xavier: Made ends meet in the mid-’90s by playing bars as “Hootie Mack,” a Hootie & the Blowfish/Bell Biv DeVoe cover band.

Lennox Forrester, SIU Edwardsville: What he really wants to do is direct.

Billy Kennedy, Texas A&M: Stole a bunch of staplers from Murray State and Murray State could really use those staplers.

LeVelle Moton, North Carolina Central: Is seriously hoping no one gives him shit about these bran muffins not being gluten-free. For crying out loud, he brought enough for everyone at the office. Doesn’t that count for anything?

Andy Enfield, USC: Is worried about how being married to a swimsuit model is reinforcing heteronormative ideals in an alpha male environment, but not really.