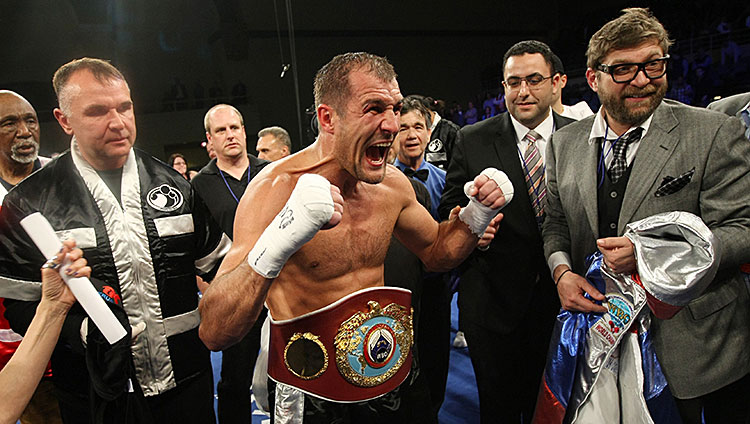 1. This is what Kovalev does. He did it to Cedric Agnew on Saturday night. 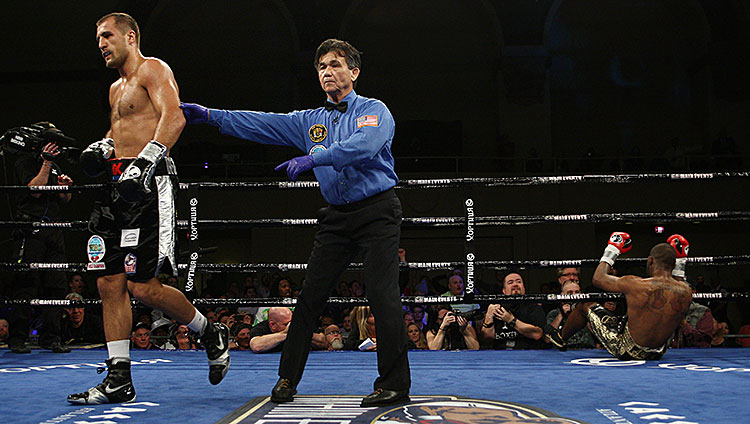 Somebody should have told Cedric Agnew, the undefeated Chicago light heavyweight who challenged Sergey Kovalev for his 175-pound championship Saturday night in Atlantic City, that it might not have been wise to walk to the ring to James Brown’s “Living in America” — i.e., the same song that played in Rocky IV while Apollo Creed was lowered into the ring in his American-flag top hat and robe before being beaten to death by Ivan “If He Dies, He Dies” Drago. Kovalev, who wore a T-shirt decorated with a picture of himself celebrating a knockout and the words “I WILL KRUSH HIM” to last Wednesday’s fight week press conference, probably resembles the fictional Drago more than any other real-life fighter. Just about every boxing fan and expert expected Kovalev to knock out — and badly hurt — his little-known opponent, and for Agnew to strut into combat with Apollo’s funeral march blaring in the background felt like it was going several steps past projecting confidence into tempting fate.

Thankfully, Agnew suffered a more mundane fate Saturday night than Creed did in 1985. He fought defensively against Kovalev, using a high, rigid peekaboo guard to dull the force of Kovalev’s blows, and it helped him last until the seventh round, longer than Krusher’s six previous opponents, all of whom lost by knockout. In the end, though, Agnew was counted out after he dropped to his knees from absorbing many powerful left jabs and hooks to the rib cage.

2. Kovalev does this a lot.

Kovalev is from Chelyabinsk, Russia, a city you probably have never heard of, unless you remember when it was struck by an actual meteor in February 2013. He has 22 knockouts in 24 professional victories, a respectable although not-quite-gilded amateur background, and power in both hands. In recent years, as he has faced stronger competition (opponents like Gabriel Campillo and Nathan Cleverly were top-10 light heavyweights before getting pasted), Kovalev’s punching power has looked as devastating as it did against professional chum like Micky Stackhouse and Michael Birthmark (I shit you not, his surname is Birthmark).

Kovalev fights with a vicious streak that comes off as rare even among prizefighters. He walks opponents down and keeps shooting thudding straight right hands and lashing left hooks until he breaks through their guards and leaves them broken. And he does so with a demeanor that suggests he’s not just doing this because he’s a professional athlete whose job it is to win boxing matches, but also that he does it because he is in touch with his inner sadist. Kovalev appears to enjoy hurting people who challenge him, and he does not seem at all conflicted about it.

Thanks to his mean streak and the expectation that his fights will produce action, Kovalev has become a darling of the die-hard boxing fan set. In their 2013 year-end awards, the hosts of The Queensberry Rules boxing podcast named Kovalev one of the fighters they’d be most willing to let sleep with their wives once, since he’s just such a badass they could accept being cuckolded by him.

3. Kovalev is also kind of a dick, and boxing fans love him for it.

What you see above — and what you may never be able to unsee — is a man called Krusher working a pelvic-thrust feint into his attack on Cleverly, who at the moment was still the WBO light heavyweight champion, although he wouldn’t be for long. Kovalev knocked Cleverly out, handed him his first loss, and convinced him to move up to a different weight class. But the nastiest thing Kovalev did to Cleverly last August was emasculate him with the crotch feint, which basically amounted to him saying, “Hey, Nathan, I’m so not afraid of you that I can take a break from knocking you senseless to briefly teabag the air in front of you. Then I’ll finish up that beatdown.”

4. But Kovalev doesn’t take himself too seriously. 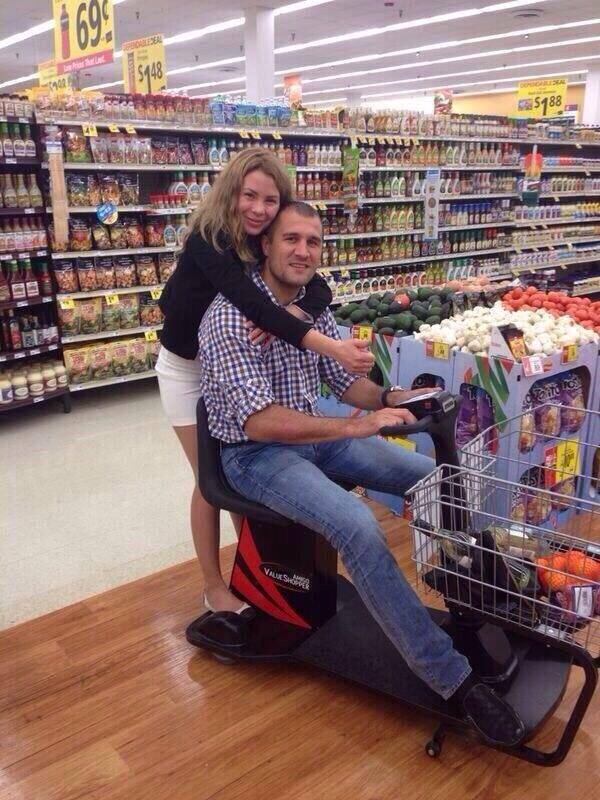 I’m not sure what’s happening here, but it definitely makes me a bigger fan of Sergey Kovalev.

5. And these are Kovalev’s opponent’s parents on Saturday night. 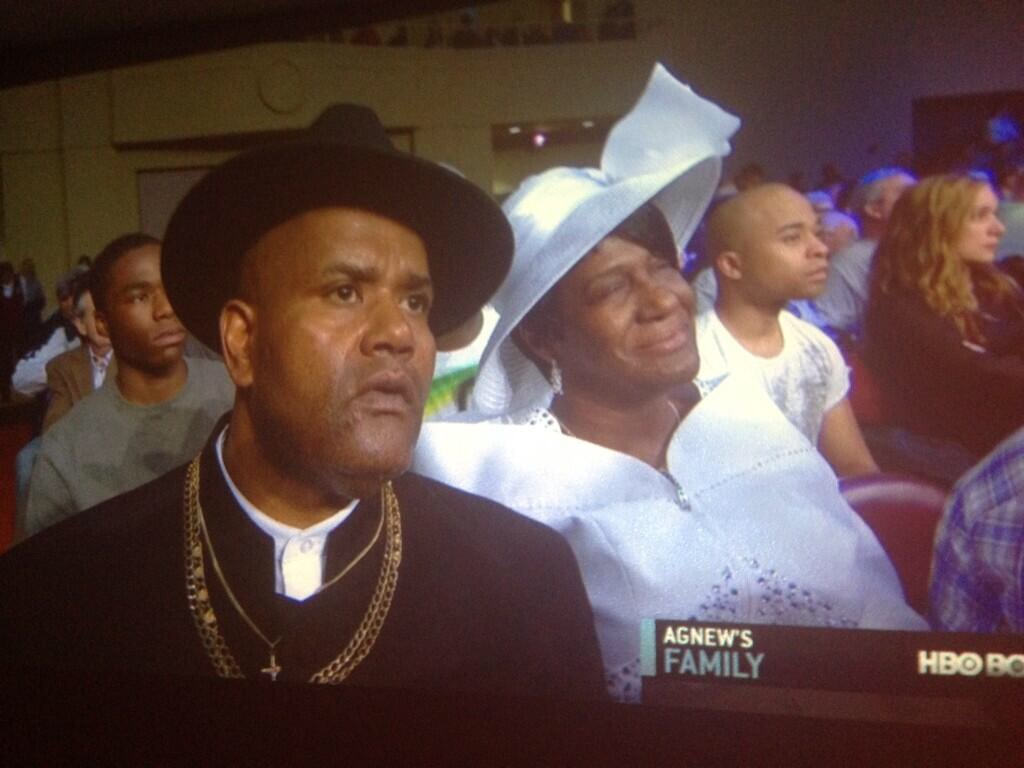 A. Getting ready to go to church.

B. Getting ready to go to a Detroit Spinners show.

C. Watching their son absorb lots of punishment from Kovalev.

D. Pondering the god-awful recent boxing developments that all but ensure Kovalev will not be matched with a worthy challenger for the foreseeable future.

There’s no reason why all four can’t be true, although C is the only confirmed answer. Even so, let me briefly touch on the final option. Last week, the boxing world was in a tizzy over Adonis Stevenson, the lineal 175-pound champion and Kovalev’s would-be rival in the division, switching networks from HBO — where Kovalev fights — to Showtime for his May 26 bout with Polish contender Andrzej Fonfara, and presumably for further upcoming fights. Many predicted this move in February after Stevenson signed with manager Al Haymon, boxing’s one-man illuminati. HBO generally refuses to deal with Haymon, and last week Stevenson accepted an offer from Showtime that HBO declined to match.

To sort out the entire sordid affair — who stabbed who in the back, who failed to live up to their word, who should have gotten contracts signed before Stevenson could decamp — would require several thousand words of background on the HBO-Showtime boxing rivalry and probably a federal investigation. Some have accused Stevenson of switching networks to duck an anticipated clash with Kovalev later this year. Others have suggested that Stevenson merely seized an opportunity to make more money while accepting less in-ring risk, which is the goal of pretty much every star fighter.

What it means for Kovalev, unfortunately, is that for the time being there aren’t many interesting opponents on the horizon. He could target Jean Pascal, who, like Stevenson, has Haitian roots and lives in Quebec. Unlike Stevenson, however, few boxing experts consider Pascal to be an elite fighter or a compelling opponent for Kovalev. It’s just as likely that Kovalev will continue mowing down solid but very unspectacular opponents that his promoter, Main Events, builds up to face him. The company recently signed Malawian contender Isaac Chilemba, who is most notable for making it through a fight when he had tapeworm eggs in his brain. (He didn’t know about the infestation at the time, and the parasites have since been removed.)

Chilemba beat another middling contender, Denis Grachev, earlier this month, and if he keeps winning he could end up being rewarded with a shot at Kovalev in the not-too-distant future. It’s a fight that few boxing fans will get excited over and which will probably only piss them off about the Stevenson fight they’re not getting, but if and when it happens, it will probably end with Chilemba holding his skull and wondering if he would have been better off letting the tapeworms hatch inside his gray matter than stepping into the ring with the Krusher.