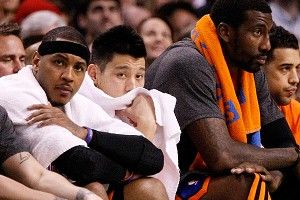 Even during the glory days of Linsanity, when hearts across New York sung with optimism, the return of Carmelo Anthony was regarded with apprehension and fearful shudders. The Knicks are now a slovenly 2-7 since he reentered the starting lineup, and Anthony has assumed a position of popularity that lies somewhere between Joseph Kony and Typhoid Mary. On the Carmelo Anthony Sucks Forum, anonymous posts say things like, “Selfish Ego-maniac. It’s all about Me-Melo-and I,” and, “Follow the Melo-BRICK road.” And during introductions before the Knicks’ 106-94 loss to the Sixers on Sunday, he was greeted with a smattering of boos.

This is all an abrupt role reversal for a man who was regarded a year ago as the cornerstone of this team. To many fans, it didn’t matter that management disemboweled the roster to pry him away from the Nuggets or that a Baltimore upbringing made his “Brooklyn homecoming” narrative a tad imprecise. Anthony was the man who would lead the Knicks to the Promised Land. For this franchise, the second round of the playoffs would qualify as Xanadu — but so what?

As despair engulfs New York and shrieking for the firing of coach Mike D’Antoni resumes, Anthony has come to represent everything wrong with the Knicks.

Most importantly, the Jeremy Lin-led incarnation of the Knicks won games. But beyond the victories, their scrappy, ebullient, cooperative style of play had magnetic appeal. Lin handled scoring and distribution, Jared Jeffries and Tyson Chandler played ferocious defense, Steve Novak launched 3s, and Landry Fields was the goop that kept the pipes from leaking. It was a distinctive departure from the malaise of underachievement that characterized the Knicks’ season before and since. Instead of crumbling beneath the weight of high expectations, they surpassed low ones.

Although Lin’s success occurred with both Amar’e Stoudemire and Anthony sidelined, the perception was that Stoudemire’s re-acclimation into the strange, alien world that had blossomed in their absence would go smoothly. Since his halcyon days on the Phoenix Suns, the power forward had always been comfortable in a pick-and-roll offense that let him slash toward the basket and pile-drive dunks on opponents’ heads. No big whoop.

Anthony presented a more complicated integration process. Early in the season, when asked to perform in a quasi-point guard capacity, he often resorted to operating in isolation on the wing or high post. There was little of the swirling ball movement or frantic action that D’Antoni’s teams customarily exhibit. When Lin finally gave the team someone with the willingness and aptitude to run the offense as it was designed, the fluidity reappeared. Instead of watching Anthony size up an opponent with endless jab steps and ball fakes, players like Fields and Jeffries were cutting to the basket, racing out for alley-oops, and finding Novak lurking on the baseline corners.

Everyone soon pondered the same question: Can Lin and Carmelo coexist? The hand-wringing seemed silly — after all, adding one of the NBA’s best scorers to a winning team sounded about as problematic as having too large a slice of red velvet cake. On Twitter, when a wiseacre pondered whether Anthony knew or cared if the Knicks were “terrified” by his return, Anthony snapped, “I didn’t realize that. Thanx4update.” It now appears that all that hypochondriac bleating was actually symptomatic of cancer after all.

I didn’t realize that. Thanx4update“@tomtomphilly: Wonder if @carmeloanthony knows or cares how terrified #Knicks fans are about his return

Hold on, though. Carmelo is hurting the Knicks, but not for the reasons everyone is wailing about. The common perception is that Anthony has been stifling the team’s offense by gumming up the democratic system Lin benevolently presided over. That’s not true. Yes, Anthony has been abysmal this season — his .401 field goal percentage is a career low, his .307 3-point percentage is his worst since 2006, and his offensive rating is eighth on the team — but the problem is elsewhere.

In the nine games since Anthony’s return, the Knicks’ offensive rating has hovered at about 104. (Right now, it sits at 101.7 for the season.) This pace-adjusted stat means that per 100 possessions, they score 104 points.

Let’s compare those numbers to the gorgeous, purring, Lin-fueled engine. During that glorious stretch, the Knicks’ offense also had an offensive rating of 104. And considering five of their nine recent games have been against suffocating defenses, the Knicks’ offense is probably a bit better than when Lin was controlling everything.

The sad truth is that New York hasn’t been effective on offense all year. Not when Lin was starring, not now. But when the team was playing Lin aside blue-collar laborers like Chandler, Jeffries, Fields, and Iman Shumpert, their defensive rating was 97. That would be second best in the NBA if extended over an entire season. The Knicks were winning by stifling opponents and hoping that Lin, then a relatively un-scouted commodity — could figure out a way to win games in the closing minutes.

Over the last nine games, the Knicks’ defense has been putrid. They’ve given up about 108 points per 100 possessions. Over a season, that would be among the worst ratings in the NBA. It’s about the same degree of staunchness demonstrated by the Golden State Warriors and Sacramento Kings.

Cluck at Anthony’s unimpressive defense if you like, but he alone isn’t making the Knicks sieve-like. Stoudemire appears rickety from last season’s back injury and covers significantly less ground than limber teammates like Jeffries and Chandler. And Lin, despite being viewed as a martyr slaughtered on the shrine of Anthony’s arrogance, is being shredded by every quality opposing point guard he faces. It was different when Chandler and Jeffries were waiting for any pipsqueak who breezed by him into the lane, but now his backup support includes a dispassionate Anthony and a hobbled Stoudemire.

Carmelo’s dopey grin and breezy nonchalance that can approach vacancy are easy irritants, but the problem is not that he’s making the offense worse — it’s just that he’s keeping it the same. It’s a complete boondoggle: The Knicks’ supposed savior has become a villain, and a middling point guard has become its hero.