The Jets Are Just Getting Started 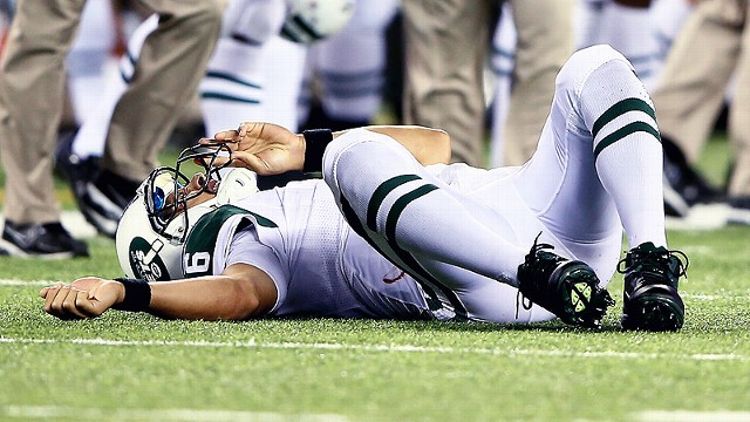 I was out with some friends Friday night, and someone from San Francisco was explaining how he feels about the 49ers. He said he’d grown up watching the Super Bowl teams, and it was harder to care as much these days. Demanding more just made this guy feel greedy. Great players, great teams, Super Bowls. Niners fans has gotten everything they could ever want from their football team.

“So, the exact opposite of how I feel,” said a friend who’s a Jets fan.

Pretty much! Then we all laughed and spent five minutes discussing Mark Sanchez, Rex Ryan, and the sheer spectacle of suck that this Jets franchise has become. It’s all pretty incredible. If teams like the 49ers have been successful enough to make fans complacent, the Jets are the team that has beaten their fans into some sort of dazed, fatalistic apathy.

And nobody can blame them. Every time you think the Jets have hit rock bottom and can’t possibly get any more ridiculous, they go and one-up themselves. Which brings us to Saturday night against the Giants, a disaster in five acts.

1. We began the night with rookie Geno Smith starting the third preseason game, his best chance yet to win the starting quarterback job. And it started OK! He went three-and-out on his first series, but then he led an 86-yard touchdown drive against the Giants’ first-team defense. Maybe Geno’s the answer after all?

Note: This is a crucial element of any torturous franchise.

They have to get your hopes up.

2. Geno goes three-and-out on his next series, and follows that by throwing three interceptions on his next four drives. So maybe Geno’s not the answer, after all. And then …

3. In retrospect, it’s shocking it took this long for a Jets QB to do this. Come for the safety, stay for the helpless throw to nowhere.

That was the end of Geno’s night. If the quarterback job was up for grabs before Saturday, Geno all but sealed his fate Saturday. Mark Sanchez won the starting job by default. At this point, Matt Simms began warming up on the sidelines to come in for fourth-quarter mop-up duty with all the backups. But wait! That wouldn’t be Jets enough.

Rex decided he needed to see Sanchez, too.

4. So Sanchez hurried to warm up, and:

That’s almost too good to be real.

5. Sanchez got sacked his first play in, which probably should have been a red flag. But Rex stuck with him, and after some back-and-forth misery, Sanchez got destroyed all over again. As he scrambled outside the pocket to hit Mohamed Massaquoi 22 yards down the field for what Rex Ryan called “the best play of his preseason,” Sanchez ALSO got caught by Marvin Austin from behind and had his throwing shoulder driven straight into the ground. He left with an injury, while sportswriters on Twitter start calling for Rex’s job.

Rex Ryan should be fired tonight for signing off on one of the dumbest decisions I've ever seen. #nyj

The best part: This game went to overtime, which meant that everyone involved had to soak in the misery for an extra 30 minutes or so before the Jets finally “won” the MetLife Snoopy trophy that comes with the Jets-Giants preseason clash every year. Even the good things that happen to this team are really just twisting the knife deeper.

Afterward, you had Rex Ryan’s press conference, where he refused to name a starter and then started facing the wall while rambling at the assembled media. Or something like that.

Poor Rex. He was so much more fun a few years ago, back when he was fat. Now he’s not cursing anymore or guaranteeing Super Bowls, and he just looks weathered and beaten down by reality. That’s pretty much everyone surrounding this team, actually.

The Jets are like a car crash that just keeps going. First the engine started smoking (8-8 in 2011) and it became clear that this wasn’t going to end well. Then they added Tim Tebow last summer, brought back Sanchez and Ryan, and by Thanksgiving against the Patriots the engine was on fire. Now it’s 2013 and the hood is smashed against the windshield, the engine’s still on fire, and … They’re still driving!

We have no idea how bad this will get. People are already calling for Ryan’s job, fans are tweeting at Sanchez hoping that he tears his ACL, Santonio Holmes won’t say if he’ll play this year, and after Ryan said last week that Santonio looks like he’s in great condition, Holmes said “Looks can be deceiving.” Then this morning, New Jersey Governor Chris Christie went on Mike Francesa’s radio show to defend Ryan against “idiot” beat writers.

And it’s still August! I don’t want the Jets to be awful, and I like Rex, and even like Sanchez, maybe. They both deserve a fresh start somewhere else, because the situation in New York was probably a lost cause 24 months ago. But here we are. This is what happens when you keep a coach and a quarterback two years too long, and everyone comes into the season in a major media market knowing the team is doomed. Just outright chaos.

All of which brings us to two lessons from this weekend.

On Friday: There are franchises more hopeless than the Jets (Raiders, Bills), but no team has beaten down its fans quite like the Jets over the past few years. Everyone loves talking about the Jets. They are the punch line that unites us all. You knew that, though.

On Saturday: They’ve taken things to a whole new level this year. We are through the looking glass, and the team is now just a living, breathing caricature of itself at all times. And it’s not even Labor Day. We’re just getting started with this team and the thousands of GIFs and quotes they will produce this season. It will be amazing. Everyone has jokes, but no joke could ever be funnier than actual Jets games this year.