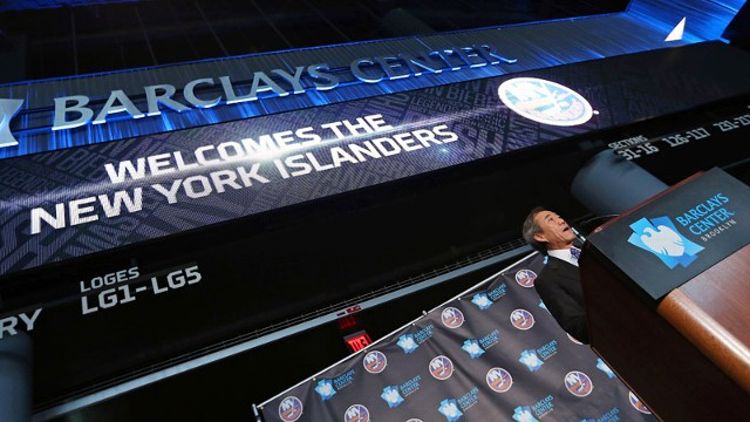 It was inevitable, when the news began trickling out this morning that the New York Islanders would be announcing a relocation from Long Island to Brooklyn, that the hipster hockey jokes would come out of the handcrafted woodwork. (We all just lived through the same relocation of the New Jersey Nets, after all.) But at the press conference announcing the new 25-year agreement between the Islanders and the Barclays Center, New York City mayor Mike Bloomberg chose to crack wise about an even more tried-and-true topic.

“Brooklyn is gonna help them get their mojo back,” Bloomberg said of the Islanders, who hoisted four cups in a row back in the ’80s but haven’t so much as won a playoff round since 1993. “And no, MoJo is not the name of a hip new Brooklyn neighborhood.” (Capitalization mine. Maybe Joralemon Street could be involved?)

The yuks were appropriate, though, because as usual it all comes down to real estate. Today’s announcement will uproot the Islanders from their current digs in the decomposing Nassau Coliseum (they don’t call it the Mausoleum for nothing) when the team’s vengeful ghost of a 30-year lease is finally, thankfully exorcised in 2015.

They won’t be going far — less than 30 miles as the crow flies — but in the location-location-location world of the greater New York metropolitan area, it might as well be light-years. Barclays, with its hip-hop headliners and Streisand concerts and Russian moguls, is backed by well-known (and controversial) New York developer Bruce Ratner. The municipally owned Nassau Coliseum, meanwhile, is the NHL’s oldest arena, the sort that looks like it was dropped from space into a giant parking lot. Its problems (leaky roof, crumbling everything) are the stuff of legend (and asbestos investigations), and they aren’t limited to the building itself.

As I noted in a story on the Islanders’ arena situation in August of 2011, the town of Uniondale and much of Nassau County, where the Coliseum is located, faced major development issues even at the time the arena was brand-spanking-new. One urban planner quoted in the New York Times in 1974 called the county’s “blight so widespread, its sprawl so malignant, that much of it seems to be crying out not for planning or preservation but for thorough renewal.” In 1986, owner John Pickett was already lobbying for a new home.

And things only got worse after that. By the time Charles Wang bought the team in 2000, it was with the assumption that he’d be able to use it as a centerpiece for the kind of large-scale development he felt the area sorely needed. The $3.8 billion Lighthouse Project was his (privately funded) solution; after years of bureaucratic and political stonewalling, the effort died in 2010. A less compelling attempt to finance a better arena via public debt was voted down last year in a referendum. With the lease expiration looming, places like Quebec or Kansas City began to seem like real options. Instead, the Islanders partnered with Ratner and his new Barclays Center, keeping the team technically on Long Island.

“Bruce and I met six or seven years ago discussing how great it would be to have Brooklyn Yards and the Lighthouse [developed], Wang said today, noting wryly that Ratner’s plan actually came to fruition. For his part, Ratner called Wang (who moved to Queens as a kid and graduated from Brooklyn Tech) “a hero” for not moving the team out of the region.

Barclays Center is an imperfect solution. The team will not be the arena’s no. 1 tenant, something that Wang long desired during his Lighthouse Project days. And during Barclays’ planning process, the cost-cutting decision was made to optimize it for basketball, but not hockey. The result is an awkward horseshoe seating arrangement for hockey games, and a current max capacity of around 14,500. Today Bettman (who in April had coolly responded to the idea of a move to Brooklyn with a withering “Barclays, I suppose, on some level, is an option”) brushed off questions about the configuration, pointing to the success of the 15,004-person arena in Winnipeg. He stopped short of going full real estate agent and calling the setup “cozy,” however.

Still, the move was news as good as it gets these days in the NHL, which remains mired in a bleak lockout. The Islanders situation was threatening to become even more of an ugly distraction, and today’s announcement was a positive step in establishing what has the potential to be a bright future for the organization. Now, we don’t just have John Tavares’s continued development to look forward to: We have the potential of Marty Markowitz participating in wacky intermission stunts. (At the press conference Markowitz called the deal “a true Miracle on Ice” and “a true power play,” described his excitement to take a “spin on the Zamboni,” and ended his comments with the words “Brooklyn’s Ice Man cometh.”)

It’s admittedly depressing to watch the Islanders, once a dynastic franchise that shaped a generation of hockey fans “out East,” having to pack up and leave, though longtime fans were no doubt cheered by the news that the logo and team name will remain the same. This last part is a bummer for the funnymen hoping, as they did with the Nets, for a more artisanal team.

But I don’t think you have to resort to arugula or stroller jokes to understand what will happen with the New York Islanders. It’ll be a team that will ultimately find popularity in its flashy new home in Brooklyn, no doubt; maybe it’ll even become a success. But every so often, deep inside, the franchise will always be thinking back to its youth, to that time of wall-to-wall-carpeted basements and striped shirts and Billy Joel and the suburbs and Star Wars lunchboxes and gaudy mustaches, and it won’t be able to shake the fact that somehow things were better back then. And I don’t think you have to be a Brooklyn hipster to understand just how that feels.