The Huddle: Evaluating the Offensive Line Class of 2008 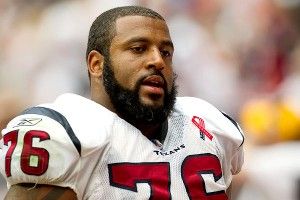 According to LONGtime Houston Chronicle reporter John McClain, the Texans have agreed to a contract extension with left tackle Duane Brown. The terms haven’t been disclosed, but Brown, who was entering the final year of his rookie deal and has been a staple on one of the league’s best offensive lines, should be looking at a sizable haul.

Houston took Brown, originally thought to be on the border of the first and second round, with the 26th overall pick in 2008. The Virginia Tech product was the last of eight offensive tackles taken in the first round that year. The draft (mostly Jake Long) was a pivot point in the stance on tackles being a quick route to a franchise turnaround and the first in a line of first rounds with “runs” on players at the position. Four years later, it seems like we can finally make a reasonable assessment on each member of the historic draft.

Jake Long, first overall, Miami Dolphins
Still the best argument for drafting a tackle high when rebuilding, Long has been among the league’s best players since coming to Miami.

Ryan Clady, seventh overall, Denver Broncos
As a rookie, it looked as if Clady’s career would forever be linked with Long’s as both developed into two of the best offensive linemen in football. Clady hasn’t missed a single start with Denver, and although he went to his second Pro Bowl last year, he hasn’t played at the same level since seriously injuring his knee during a pickup basketball game before the 2010 season. He’s still a far-above-average NFL starter with enough confidence in his value to decline the $50 million ($28 million guaranteed) Denver offered him last month, but what originally seemed like a perennial Pro Bowl career has fallen short.

Chris Williams, 14th overall, Chicago Bears
I’ve had the task of following Williams’s career from the time he was drafted, and we’ll just say it’s been a tough road. Flagged by some teams for having chronic back issues coming out of Vanderbilt, Williams (Wait for it … ) hurt his back early in his first training camp! Since then, it’s been a series of stints at and demotions from positions all along the Bears’ porous offensive line. This summer, he’s locked in a slap fight of wills with former seventh-round pick J’Marcus Webb for the chance to be Chicago’s left tackle. May the most almost-serviceable man win.

Branden Albert, 15th overall, Kansas City Chiefs
A college guard whose size and quickness meant a projection as a pro tackle, Albert has held down the Chiefs’ left tackle spot for most of his time in Kansas City.

Gosder Cherilus, 17th overall, Detroit Lions
The first full-time right tackle of the group, Cherilus has been a starter for the Lions since being drafted. Detroit drafted Iowa tackle Riley Reiff in this year’s first round, but it’s been debated whether that choice was an indictment of Cherilus or an indication that the Lions feel 34-year-old Jeff Backus’s days are numbered on the left side. Backus (coming off a biceps injury suffered against the Saints) should be back in time for Week 1, and although the coaching staff had said they expected Reiff to see some early time, Cherilus is reportedly having a camp strong enough to fend off the rookie a bit longer.

Jeff Otah, 19th overall, Carolina Panthers
Otah started 12 games as a rookie, and early on, it seemed like the massive right tackle would be an ideal run-blocking machine opposite Jordan Gross. What followed was three straight seasons that ended with Otah on injured reserve because of problems with his left knee. Last month, Otah seemed destined for the Island of Reclamation Projects that is Cortland, New York, but the Jets’ trade for Otah fell through when he failed a physical. He was subsequently released by Carolina, and the growing feeling seems to be that Otah’s career is in jeopardy.

Sam Baker, 21st overall, Atlanta Falcons
Like several of his ’08 classmates, Baker’s 2012 could go a long way in swinging the course of his career. He started all 16 games during Atlanta’s 13-3 2010 season, but a bad back plagued much of a disappointing 2011 for the former USC star. Baker has had two back surgeries since last October, and although there’s no real competition for his starting job this year, consistency in both his health and his play will inform Thomas Dimitroff and the rest of the Falcons brass whether he’s the long-term answer on Matt Ryan’s blind side.