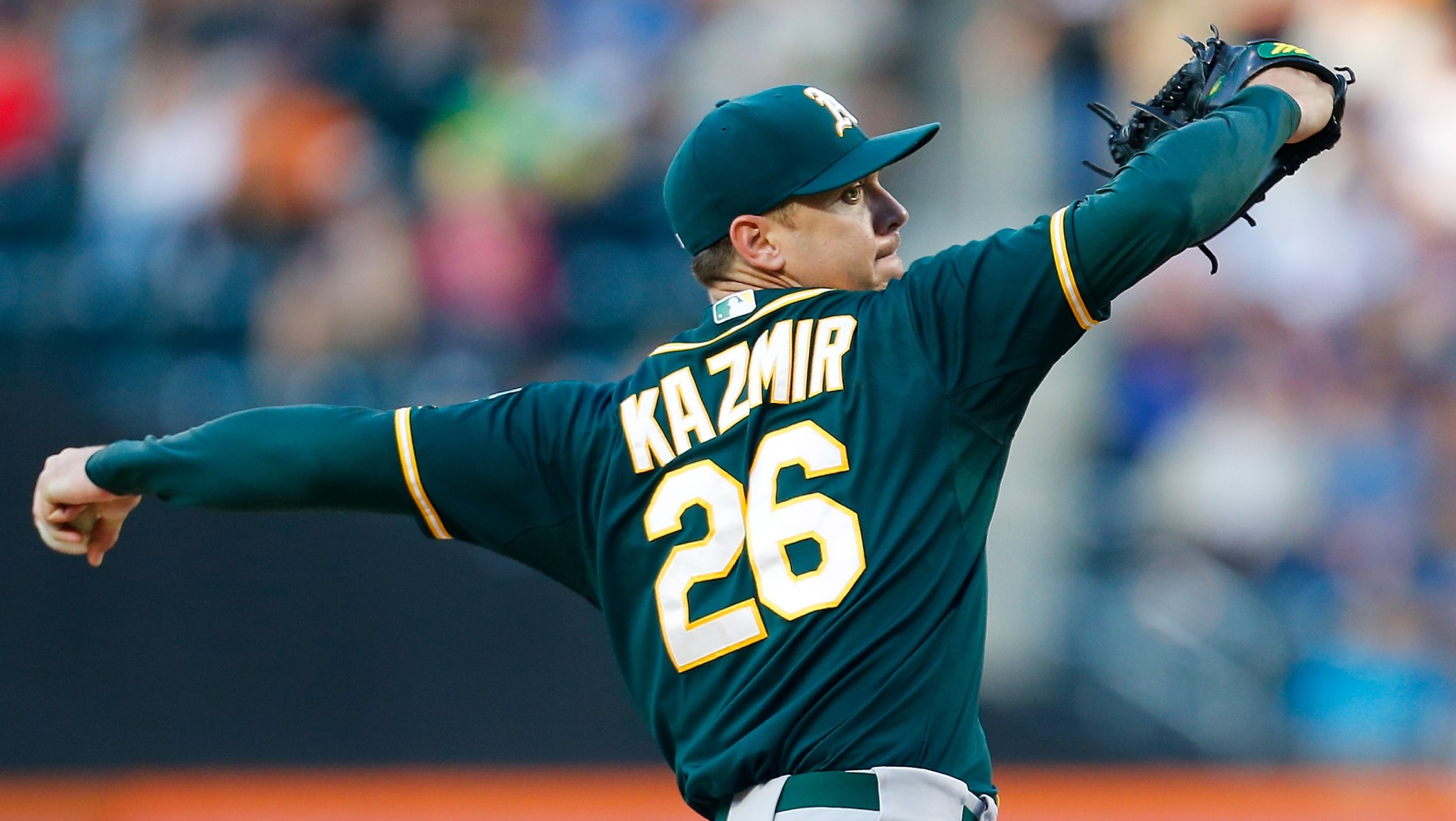 At 48-30, the Oakland A’s have the best record in baseball. Most power rankings I’ve found have them as the best team in baseball, but that’s only recently become the case; ESPN moved them up this past week, while Jonah Keri bumped them up to no. 1 in The 30 two weeks ago. It took a rough stretch from the cross-bay Giants to give the A’s this public perception, but they’ve been the most impressive team in baseball for a while now. Oakland’s record, as good as it is, masks the fact that it’s an even better baseball team than most realize. The Athletics haven’t just been the best team in baseball during the first half of the regular season. They’ve been one of the best teams in modern baseball history.

Through 78 games, the Athletics have a run differential of plus-129. I realize that 78 games is a weird end point since it’s not a round number and is so close to the 81-game midway point of the season, but this is hardly a new figure; they have had the best run differential in baseball after 20, 30, 40, 50, 60, and 70 games, too. And I feel confident saying they will have the best run differential in baseball once we hit that halfway point, because no team is within 70 runs of their total. Seattle is second in the league, and it’s all the way back at plus-51. The Mariners are closer to the Twins and their 21st-best run differential of minus-22 than they are to the Athletics. As is the case in all of your favorite sports, score differential is a better indicator of future win-loss record than that same team’s actual win-loss record over a given length of time.

Oakland’s Pythagorean win-loss record is an absurd 52-26; it is playing at the “true” talent level of a 108-win team. And that’s after a nine-run loss to the Mets on Tuesday; through their first 75 games, the A’s were on a 112-win pace. That’s nuts. Nuts! It’s something you would see from the best teams in the earlier decades of the 20th century, but a start that good almost never happens in modern professional baseball. Here is a list of the teams with the best run differentials through 78 games since 1960, per Baseball-Reference.com:

With the 10th-best run differential since 1960, the A’s aren’t simply in good company; they’re surrounded by teams that were regarded as once-in-a-generation treasures. They’ve got the best run differential since the 2001 Mariners, a team that won 116 freaking games. Six of these 19 other teams won the World Series, another five made it there and lost, and just three failed to make the playoffs (and their collapses became the stuff of legend). This isn’t just your typical best team in baseball.

With baseball’s expanded playoffs, the A’s are all but assured of a playoff spot with three months to go; estimates of Oakland’s playoff chances range from FanGraphs’s 96.8 percent to Baseball Prospectus’s 97.1 percent, which is impressive both in terms of Oakland’s playoff chances and the tiny range of the projection systems. The other 19 teams in this group won 58.9 percent of their games after their hot 78-game starts; playing at that level would bring the 2014 A’s into the clubhouse with a 97-65 record.

If 97 wins seems low to you for one of the best teams of this era, well, it is. You’ll notice something else in that table. At .615, the A’s have the second-worst actual winning percentage of the 20 run differential kings. The 1976 edition of the Big Red Machine in Cincinnati actually posted a better run differential than this team through 78 games while starting a mere 47-31. They went 55-29 over the remainder of the season and went 7-0 in the playoffs to claim their second consecutive World Series. Oakland wouldn’t mind emulating Cincinnati’s record, even if it can’t match its feat.

It’s then strangely true that Oakland is simultaneously the team with the best record in baseball and among the teams with the worst luck in baseball. Oakland has 4.6 fewer wins than its Pythagorean differential would suggest, a figure only narrowly matched by the Chicago Cubs (4.5 wins). Explaining why the Cubs have underperformed their run differential is simple: They’ve been awful in close games, thanks to a bullpen that’s blown 42 percent of save opportunities, the third-highest rate in the league. Chicago is 7-13 in one-run games and 3-6 in extra innings, but that isn’t the case with Oakland. The Athletics’ biggest problem in key moments has actually been hitting: Oakland’s bats lead the league in runs scored per game, but it has been the eighth-worst team in clutch situations. The A’s struggled a bit at the beginning of the season with Jim Johnson as their closer, and they’ve still managed to blow a below-average 38 percent of their save chances, but things have settled down since Sean Doolittle took over as the team closer. Oakland is 11-10 in one-run games and 8-5 in extra innings.

No, instead, the Athletics are just freakishly impressive at dominating the competition. They blow other teams out and rarely get blown out themselves. In games decided by five runs or more, the Athletics are 18-5. Split in any way, that’s both rare and impressive. With those 18 blowouts in 78 games, 23.1 percent of Oakland contests end with a dominant victory by the A’s. Only six teams since 1960 have topped that rate of slaughter over a full season. That winning percentage isn’t bad either; at 18-5, Oakland’s .783 clip in blowouts is topped by just seven other teams over that same time frame.

Is there a reason to think the Athletics will stop playing this well? The natural argument is to wonder whether they’ve feasted on an easy schedule during the first half, especially in those blowout wins. That hasn’t really been the case. Oakland’s faced the sixth-hardest schedule in baseball this season, and while it does have a few blowout wins against the likes of the Astros, seven of Oakland’s 18 five-plus-run wins have come against teams that are above .500, including two each over the Nationals and Angels. Three more came against the Indians, who are 38-37 in games where they aren’t losing to the Athletics by five runs or more.

What’s amazing, of course, is that the Athletics are doing this with a bunch of guys the league didn’t even really want. Their top prospects and the top talents they’ve acquired in trades have mostly stagnated or struggled to stay healthy, with the likes of Jarrod Parker and A.J. Griffin already on the shelf. Look at Oakland’s top 20 prospects heading into 2011 and you’ll see that they’re getting virtually nothing out of those players. Grant Green, then the team’s top prospect, was unceremoniously dumped last year for utility infielder Alberto Callaspo. Two top-10 prospects were part of the bounty for Jed Lowrie. Michael Choice helped net utility outfielder Craig Gentry. The first notable contributor is at no. 13, where catcher Josh Donaldson gets a C-plus grade from respected prospect evaluator John Sickels (who does, in his defense, note that Donaldson could have some very good years in his late twenties). In fact, if you go back to 2011, virtually every key Athletics contributor this season was either an afterthought or worse:

It would take another whole piece to go through how and why the A’s found all of these players and made them better. There are new grips and position conversions. Oakland has believed in Quad-A sluggers and targeted fly ball hitters. In a sentence, its organizational strategy has been to have a deeper roster with fewer holes one through 25 than anybody else in baseball.

That might have been the case in 2012 and 2013, but Oakland’s been less consistent in 2014, with notable holes at two positions. Perhaps more excitingly, this gives Billy Beane and his staff clear targets for improvement as his team hopes to keep up its dominant performance in the second half. Under Beane, the Athletics have had Mark Ellis and a whole lot of failed prospects (like Jose Ortiz and Jemile Weeks) and short-term stopgaps (‘sup, Ray Durham and Randy Velarde) at second base. The most recent solution has been Eric Sogard, and while the 28-year-old was a big hit in the Face of MLB contest this past offseason, he seems to carry a bat exclusively for fashion’s sake. Sogard has posted a .609 career OPS, including a sickly .498 OPS this season, which has led a desperate A’s team to give Nick Punto serious time at second.

In right field, meanwhile, Josh Reddick’s bat has gone silent since his 32-homer outburst in 2012. Over the two ensuing years, Reddick has hit .222/.300/.366, and his HR/FB rate from 2012 (14.0 percent) looks less like a new standard of performance and more like an outlier. At the very least, the A’s have to consider sitting Reddick more frequently against lefties; it’s a small sample size of 56 at-bats, but Reddick has a .404 OPS against lefties this season. Gentry can be part of that platoon, but the perfect option for the A’s certainly seems like Rays switch-hitter Ben Zobrist, who can play second base and right field and has a manageable contract through the end of 2015.

Oakland could also add another starting pitcher, although the identity of that starter may come from an unlikely place. The A’s have been down two starters all season, with Parker and Griffin undergoing Tommy John surgery before throwing a single regular-season pitch. They’ve gotten 290 innings of 2.76 ERA ball from Sonny Gray, Scott Kazmir, and Jesse Chavez at the top of their rotation, but fourth starter Tommy Milone hasn’t been quite as effective, and they were so stretched for a fifth starter that the A’s sent the Brewers $1 (yes, one dollar) to acquire 29-year-old Brad Mills from Milwaukee’s Triple-A team this past week. He earned his first win last night against the Mets. It seems unlikely that Oakland will be able to afford a prime starting pitcher like David Price or Jeff Samardzija in this market, so who knows? Maybe the solution is Mills, who had a 1.56 ERA in the Pacific Coast League while striking out 77 hitters against just 18 walks in 75 innings. The only real qualification to play well for this A’s team is that you had to look like you were a nobody in 2011, and Mills (who had a 4.00 ERA in Las Vegas for Toronto’s Triple-A team that year) fits.

It’s a little silly to suggest that a team can fly under the radar in a world with the Extra Innings package and multiple nightly baseball wrap-up shows, but the Athletics are coming as close as possible. It’s clear that they’re good, but the combination of their West Coast locale, lack of big names, and surprisingly bad luck has helped mask what the Athletics have been: the best baseball team we’ve seen in more than a decade, at least through the first half of the season. There will be doubters who won’t take the A’s seriously until they make (and win) a World Series under Beane’s stewardship, but the best way to build a great playoff team is to build a great team. The squad that currently takes the field for the Athletics, improbably, is the greatest team Beane has built yet.