The Grantland Top Five: Dennis Rodman’s Saving Babies, Josh Hamilton and the Rest of the Week in Sports and Culture 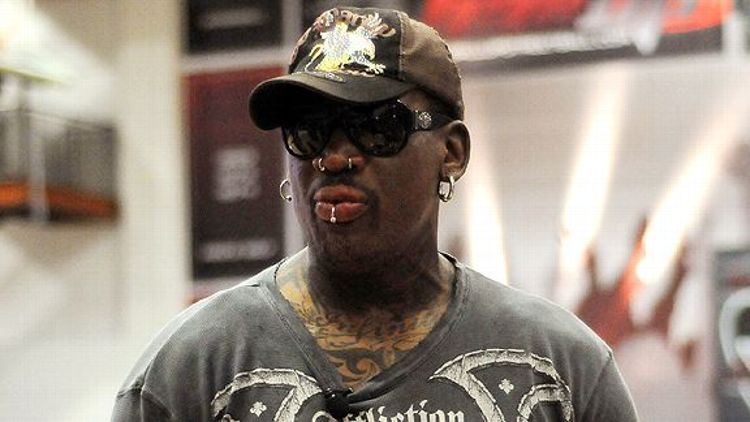 There is a moment toward the end of Double Team — showing sporadically this summer in the HBO time slot reserved for insomniacs, security guards, and parents of newborns — when a shirtless Mickey Rourke, jacked up and rubber-lipped, kidnaps the newborn son of Jean-Claude Van Damme and places the child on the dirt floor of a Roman colosseum, which he has rigged with live mines marked with crosses. Then, in a predictable twist, Rourke releases a live tiger into the ring. Things look bleak for our Belgian musclehead, but not all is lost: Here comes his partner, a flamboyant arms dealer who somehow manages to alter his hair color four times over the course of the narrative, soaring into the ring on a yellow motorbike and rescuing Van Damme’s offspring from immolation for the second consecutive scene. “Thank you,” Van Damme had told him earlier, and his partner responded with, “You owe me.”

Our nation has a long and storied history of athletes starring in regrettable films, but there’s something poignant and quintessentially nostalgic about Dennis Rodman’s turn as Van Damme’s sidekick. It’s not just the heavy-handed Coca-Cola product placements, like when Van Damme constructs a device made from an empty can and a rubber eraser to replicate his fingerprint so as to escape from an Alcatraz-like terrorist “think-tank” presided over by a Christopher Hitchens impersonator and bounded by interlocking underwater lasers; and it’s not just the overdependence upon nascent Internet technology that so characterized the movies of that era (at one point, Rodman relies on the beneficence of a clan of hacker monks who have a secret affinity for Internet pornography); and it’s not just the presence of a then-downward-spiraling Mickey Rourke in all his plastic majesty.

All of that is wonderful spectacle, but what elevates this movie is the subtext. Because the first thing I could not help but contemplate was whether Rodman’s relationship with Van Damme in Double Team dovetailed with how he viewed his relationship with Michael Jordan in 1997. Rodman’s dialogue, such as it is, consists largely of basketball metaphors, even though there is no evidence that his character ever played basketball, or that he has any sort of life outside of loitering in Fifth Element-style Antwerp nightclubs where women in scuba gear immerse themselves in diving tanks. His only reason for trailing along with Van Damme is that Van Damme owes him money for weapons; he is a mercenary, and he knows it, and it bothers him. He longs for approval from Van Damme, who is mostly concerned with proving to the viewing audience that he loves his wife, can handle all emergencies, and is able to lift a bathtub with his bare hands. Rodman bails him out again and again: Hurling a stray human skull to detonate a magic coin and blow up a sewer grate, piloting a plane, and hot-wiring a compact car for the drive to Rome. Van Damme is unimpressed by it all. “You look like a carrot with earrings,” he tells Rodman.

Even in the final line of the film, after Rourke has made a fateful decision between death by mine explosion or death by tiger mauling, after Rodman/Van Damme have survived the subsequent explosion by cowering behind a Coke machine, after Rodman has again unveiled his magic coin, thereby permitting Van Damme to escape the Hitchens impersonator in a cloud of dust (no doubt avoiding a protracted conversation about the nature of organized religion), Rodman walks toward the smoldering carnage and mutters, “You can bet your ass they’ll blame me for this one.” He has accepted his role. He will be the bad guy. He will be sacrificed for the greater good.

It’s odd to think that Rodman was already 34 years old when he was traded to the Bulls in 1995; it is sad to realize that his legacy, for the next generation, will consist of decades of reality-show appearances and publicity stunts. Double Team may not teach you much (except that there are surprising number of ways in which Coca-Cola can save your life), but it will remind you that the Rodman of 1997 already understood he was a disposable hero in search of approval — from Michael Jordan, from Jean-Claude Van Damme, and from all of us.

3. Josh Hamilton, outfielder/amateur geneticist, Texas Rangers
In June 1985, on a brilliant afternoon, I struck out three times and dropped several fly balls in right field while competing for Dean Blythe Insurance in the Suburban Little League ‘B’ Division tournament. In March 1989, on a bright morning, I sideswiped a parked car in the parking lot of a Mellon Bank. In June 2010, while gazing longingly at the noonday sun, I dropped a cup of mushroom barley soup in the middle of Bergen Street in Brooklyn, briefly halting traffic. I used to think that these gaffes were my own fault, but now, thanks to Josh Hamilton, I realize that they were caused by my own pigmentation. In fact, even if those red contact lenses don’t work, I am going to procure a pair and haunt Westboro Baptist Church protests.

“We are watching a really good comedian at his prime,” a friend wrote me the other day, and after watching Louis CK on The Daily Show the other night, it is difficult to argue. In the process of explaining why flatulence is funny, he made flatulence seem far funnier than it actually is. The intellectual elevation of the fart joke: That, I believe Harold Bloom once wrote, is the definition of genius.

Because we are nearing that moment in the summer when it gets so hot in New York City that those of us who reside here begin to consider the benefits of holding up a financial institution.