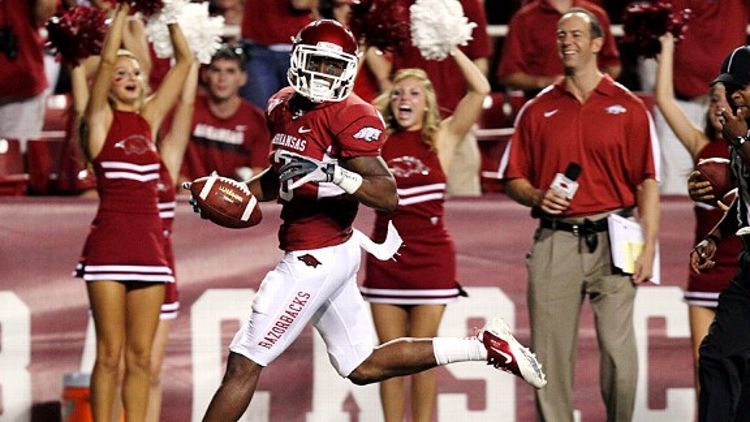 Your viewer’s guide for the final full weekend of the college football season, parsed into dual categories: The (relative) mainstream (The Cannon) and the indie (The JaMarcus).

A meaningful clash for those intractable Southerners who steadfastly believe the BCS Championship game should be replaced every year by a three-team SEC round-robin. Last year, the Friday after Thanksgiving gifted us with one of the greatest Iron Bowls in our nation’s history. Unfortunately, this year’s post-Galliformes marquee rivalry has a nickname straight out of a Percy Jackson sequel.

Appeals To: Those Who Believe The Heisman Trophy Vote Should Be Reduced To A Statistical Home Run Derby, Jack Pardee

The Cougars look to wrap up the least meaningful undefeated regular season since the 1998 Tulane Green Wave (insert gratuitous Shaun King reference here), and quarterback Case Keenum seeks to wrest the Heisman away based on the sheer weight of several meaningless numbers. I should confess that I am carrying excess baggage here, because I still believe Major Harris got shafted.

Let us not delude ourselves: Nothing can possibly match last year’s Iron Bowl, unless Bo Jackson still has eligibility remaining. But there is always the possibility that Nick Saban will get publicly frustrated, and that is an enjoyable interlude.

The game behind the game, as the winner will take on Michigan State in the inaugural Big Ten championship contest in Indianapolis. There is no reason at all that Penn State should be competitive here, but despite the fact that the Nittany Lions have a quarterback with moxie and no real talent, and despite the complete and utter collapse of all their program has stood for since the mid-20th century, they somehow continue to exist.

West Coast football rivalries are so quaint. Has there ever been a more lovely name for a clash between in-state enemies than the Apple Cup? It’s like something Martha Stewart conjured as an excuse for a dinner party.

The presumption is that Robert Griffin III is the most purely exciting college quarterback in America, but what if he’s actually the best quarterback? That may be mere provocation, I realize, but all Griffin needs is one or two more signature throws, and he’s got a shot of becoming one of the two best players with his own surname ever to win the Heisman.

Previously by Michael Weinreb:
Living in State College
The Culture of Unrest at Penn State
Growing Up Penn State