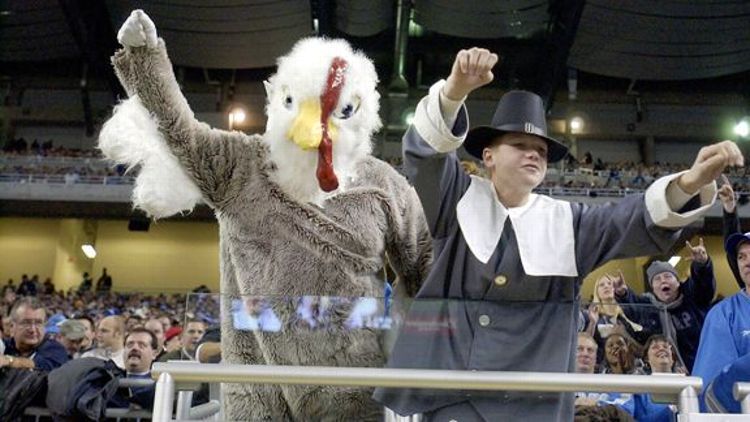 Scheduling games on Thanksgiving might very well be the greatest thing the NFL’s ever done. Can you imagine how boring the day would be without football? How lucky we are to avoid bonding with our families under the guise of watching Detroit get blown out by 40 points.

Until the Lions were recently dragged down by the rising tide of Millen, though, the perception surrounding the Thanksgiving Day host teams was that they gained a competitive advantage by virtue of hosting games on the holiday. Not only did they get to play teams that had to travel after a short week of practice, but they then got a nine-day break before having to play again — basically an extra bye week. That seemed more valuable before the NFL implemented a Thursday night package as part of their NFL Network in 2006, but it’s a question worth re-evaluating: Do the Cowboys and Lions really have an advantage by virtue of those Thanksgiving games?

Once you account for the strength of the opposition in these matchups, our analysis changes. By our best estimate, Detroit’s record in Thanksgiving games should really be 19-22; they’ve actually been one game better than what we would have expected them to be. The Cowboys, meanwhile, have an expected record of 25-14; they’re one game worse. We can’t rule out that there is a Thanksgiving Day effect for the Cowboys, Lions, and the teams that play them, but there’s also not much evidence saying that one exists.

What about the week after, though? Do the Lions and Cowboys really get a break by virtue of having those nine days off? We applied the same log5 analysis to the games each team played the week after Thanksgiving to see if there was a noticeable difference. In those games played the week after Thanksgiving, Detroit has gone 11-31. They would have expected to go 20-22, given the relative strength of their opposition and the location of the games. On the other hand, the Cowboys have gone 24-15, and we would have expected their record to be … 24-15.

All the information we can compile suggests that there just isn’t any noticeable effect on teams when they play on Thanksgiving Day or take a nice holiday afterward. We’ll get a better idea once the sample doubles in size.

It turns out that losing your starting quarterback for the season is hazardous to your side of the betting line! The switch from Jay Cutler to Caleb Hanie has caused this line to move a full 5.5 points, which seems like it might be a little much, considering that the Bears still have that great defense to work with.

It’s hard to remember the last time that the 49ers even really looked close to losing, which is why they’ve taken a lot of action this week. Then again, the Ravens are 5-0 at home this year with wins over the Steelers, Jets, Texans, Cardinals, and Bengals. It doesn’t mean they’ll necessarily continue to win there, but it’s not like they lack for quality home victories.

Without an obvious injury for the Seahawks, it looks like the tough game the Redskins gave the Cowboys has been enough to push the line two points in their direction. Finally, we can all believe in Rex Grossman again!

Previously from Bill Barnwell:
The Fabulous & the Flops of Week 11
11 Things We Loved About Week 11
All Hail the NFL Freshmen
Ease Up Tampa Haters, Their Schedule Has Been Historically Tough
Vegas & the Packers’ Quest to Go 16-0