The Bizarre Brilliance of Andrew Bynum’s Time in Philadelphia 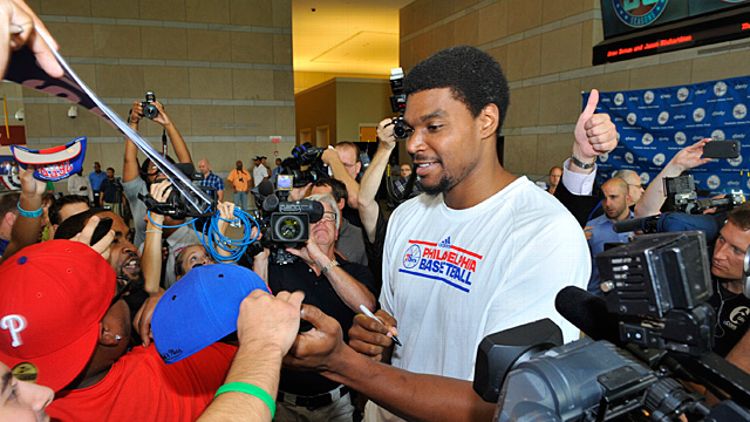 Last week, Andrew Bynum agreed to a deal with the Cleveland Cavaliers. For a 25-year-old All-Star center who won two titles with the Lakers, the terms of Bynum’s incentive-freighted deal are fantastically reasonable: Only $6 million and the first season of the two-year deal are even guaranteed. During the courting and negotiating process, there was no second-by-second Twitter orgy, no vision quest in the wilds of Aspen where he kept bumping into people wearing Bone Thugs Art of War T-shirts, no downpour of insults from Philadelphia legends like Moses Malone and Sharone Wright. Outcry from Sixers fans was not just muted — it was nonexistent.

In only one year’s time — a tenure during which he played a grand total of zero games for Philly — Bynum went from savior of the franchise to a character so maddening that responses to his departure ranged from shrugs to screeches of “good riddance.” Though the team had been stripped of Andre Iguodala, two promising youngsters, and a first-round pick in the four-team mondo-trade that brought Bynum into town, everyone was content to stagger away from the roulette wheel pants-less and down big.

No one in Philly will miss Bynum. Some regarded him as a lazy, disloyal doofus. Others saw him as permanently damaged goods with rubber-banded Raisinets bags for knees. More pragmatic heads believed he was a poor fit for a team that appears to be tanking all the way to the top of the 2014 lottery, with rookie Nerlens Noel at the pivot. There’s even a paranoid, goo-brained faction that believes the janky-kneed giant masterminded an elaborate ruse in order to royally screw over the Sixers (really, the only heist Bynum pulled was pinching tens of millions of dollars out of his own vault).

I, for one, will miss Andrew Bynum. While last season was an unwatchable disgrace — a mighty sharknado shit-storm that was still outlandishly boring to actually behold — he was truly the only element of entertainment. Don’t take this for granted, either: Players like Danny Granger, Derrick Rose, and Channing Frye also missed the entire 2013 season and contributed nothing intriguing to the hoops zeitgeist (fine, Rose enraged armchair macho-men by skipping the playoffs). So let’s take a little time to acknowledge Bynum’s fabulous contributions in Philadelphia.

From the beginning, Bynum’s debut was always tantalizingly close. After he flew out to Germany for that Mamba blood-spinning procedure last September, team executives promised he’d be ready for the start of training camp. Training camp! Even after endless setbacks and false starts, he declared in February that the odds of his return before the end of the season were “100 percent.” As methane gas filled the mine shaft, Bynum kept the fragile canary of hope alive until dark oblivion came as peacefully as possible.

While sidelined, Bynum worked tirelessly to perfect his hair-craft. He sported a small shrub when first introduced as a Sixer, and dedicated coming months to cultivating it into homage to his Philly forebears. There were Julius Erving blowouts and Iverson-ian cornrows. Later, he moved to a hair helmet that, when worn with a red collared shirt, gave him the sprezzatura of an extra from Car Wash. Eventually he unveiled the “braided halfro,” which appeared to be a tribute to R. Kelly. Watching Sixers games would have been unbearable without an occasional opportunity to screen-grab Bynum’s brave archaeopteryx nests.

Look, Doug Collins knows basketball. He also railed against the benefits of advanced metrics like an old man shaking his fist at the moon, squandered cap space on Kwame Brown and Nick Young, and orchestrated an impotent, 26th-ranked offense that generated endless midrange jumpers. During the dreary ass-end of the season, he coached as if in the throes of playoff basketball, pointlessly eking out wins and benching young players. If Bynum stayed healthy, Collins wouldn’t have been coaxed into “retirement,” and Sam Hinkie never takes the reigns.

A few days ago, I revisited my gushy take on the deal that relocated the Bynum Experience to Philadelphia. I found this: “His arrival brings to an end an era of bland irrelevance where mediocrity was celebrated as overachievement.”

There may have been other phrases in there about him being a “bruising young bulwark” and the Sixers becoming a “legitimate rising power,” but who has time to sift through the Grantland microfiche archives for such trivialities? Let’s simply scrub the highlighter over that one sentence and all agree that I was totally, irrefutably right in every single way. As correctly prognosticated, the Epoch of Mediocrity is dunzo in Philadelphia and the Glorious Age of Horrendousness has descended like a white sheet over a lumpy corpse.

Thank Andrew Bynum for that.