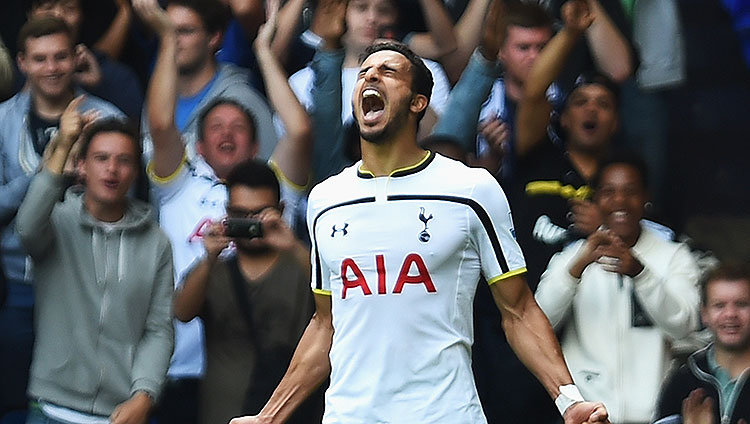 It’s Week 2. If you squint a little bit, it’s possible to see what teams are striving to become. With managers still settling on lineups, and players still getting up to speed, strong 90-minute performances have been rare early this season. Strong halves, though? Plenty of teams have put together good halves, halves that managers will be happy to put up on whatever the video equivalent of a bulletin board is and say, “That. Do that again.”

Here are the top five halves of play from Week 2 in the Premier League:

Tottenham’s First Half Against QPR

Playing their third game in a week thanks to Europa qualifying, Spurs wasted no time blowing the doors off Harry Redknapp’s QPR team. It took a grand total of 11 minutes before Nabil Bentaleb won the ball in midfield and Emmanuel Adebayor was sprung down the left side, crossing it for Nacer Chadli to chest down and punch in. It’s everything Mauricio Pochettino wants from a team: pressure in the midfield leading to a forward turned creator orchestrating a fast goal. And it wasn’t Tottenham’s best goal of the half. Neither was Eric Dier’s second goal in two games (on a grand total of two shots).

It was Chadli’s second goal that was truly something special.

No big deal, right? But look at what happened in the lead-up.

Chelsea’s Second Half Against Leicester

Be prepared to learn to properly pronounce Leicester City this season. They’re the cream of the newly promoted crop, though thanks to the scheduling gods they open with a brutal stretch facing Everton, Chelsea, and Arsenal. After coming back twice to draw with Everton, 2-2, it looked like the Leicester City Lesters (not actually their name even though it should be) might be on their way to their second unlikely point in a row. Then Chelsea flipped the Branislav Ivanovic switch.

He got on the end of this gorgeous pass from Oscar to create the first goal.

And he was a permanent presence in Leicester City’s half. He completed nine passes in the attacking third of the field, more than any other Chelsea player except Eden Hazard and Oscar. Chelsea’s other full-back, César Azpilicueta, also completed nine passes, suggesting that maybe it was as much about José Mourinho’s game plan as Ivanovic himself, but regardless, it’s a really positive sign for the Blues. So is the fact that in the second half they outpassed Leicester 85-15 in the final third (all stats courtesy of ESPN Stats & Info).

That dominance could be theoretically misleading if the underdogs were counterattacking and shooting faster, but unfortunately for the little Lesters, they were also outshot 18-3 in the second half. By the time Hazard added the insurance goal in added time, it was abundantly clear that Chelsea hit their extra gear.

Everton’s First Half Against Arsenal

This was almost a carbon copy of Everton’s first-half performance against Arsenal at Goodison last season. Romelu Lukaku started on the right, Kevin Mirallas on the left, and Steven Naismith did his bizarro false 9 impression. Séamus Coleman scored a pretty back-post header bombing forward from his full-back spot. (Hey, guess what? Mesut Özil is not good at defending the opposition full-back, in the air, in his own penalty box.) And Naismith scored on a clever little reverse ball from Lukaku after the big Belgian marauded in, on, around, over, and through Arsenal’s back line. Elementary school teachers could teach prepositions using what Lukaku did to that back line.

The first half was everything Roberto Martínez could want from his team. Both full-backs were involved. Lukaku and Mirallas found space to run at the defense. And they did it all while playing their third-string playmaker. With Ross Barkley out, Steven Pienaar started centrally after a strong opening game against Leicester City. He aggravated an injury early on and Leon Osman came in to play the role. Everton didn’t dominate the half because of Osman, but he was good enough that he didn’t hinder the attack. That kind of depth is a pleasant change for a team that just a few seasons ago had a bench that consisted mainly of duct tape, Krazy Glue, and chicken wire.

Arsenal’s Second Half Against Everton

Arsenal saved face (and stole a point) with their two late goals, scoring in the 83rd and 90th minutes. On the whole, their second half was much better than the first. They passed the ball more — completing 257 to Everton’s 118 (particularly crucial in a game in which both sides wanted to control the ball). The much-maligned Olivier Giroud, who came on at halftime for Alexis Sánchez, actually contributed in a big way to Arsenal’s second half. The Gunners only had three shots on target all game. Giroud had two of them, scoring the equalizer.

His five total shots actually led Arsenal alongside Alex Oxlade-Chamberlain. Oddly, only three Arsenal players had any shots at all, with Aaron Ramsey taking three and scoring the goal that got them back in the game.

Arsenal very effectively took advantage of what seemed to be a tiring Everton side. Coleman, who scored the first goal, was coming off injury and faded badly down the stretch in his first full game back, allowing both crosses that led to goals. Pienaar’s early injury meant Martinez had only two subs to work with, and Coleman, Lukaku, and Mirallas were all making their first starts of the season. The Toffees only managed two shots in the second half, both off target, as Arsenal put the clamps on the tiring team. Everton flagged badly down the stretch and Arsenal took advantage to once again scrape out a scrappy result.

Tottenham’s Second Half Against QPR

Spurs went so ballistic in the first half that it’s easy to overlook their very strong second-half performance. Last season, Pochettino’s Southampton teams had a bad habit of letting opponents get back into games, something Spurs found out when they came back from a two-goal deficit to win, 3-2. So it was surely refreshing for Pochettino to see his team finish out the win in style, scoring a lightning-fast counterattacking goal complete with an efficient early ball from the usually accuracy-challenged Danny Rose into the streaking Adebayor.

We probably shouldn’t get too carried away, since this QPR team is thoroughly dreadful. Redknapp has tasked assistant manager (and former Spurs man) Glenn Hoddle with instituting a back three, because apparently Redknapp watched the World Cup.

This back three is a bizarre holdover from a bygone era, though, with statuesque, immobile central defenders like a washed-up Rio Ferdinand and a never-really-was (able to move) Richard Dunne. Redknapp gave up on the system at halftime, going back to a more traditional system that at least slowed the bleeding.

Despite that change, Spurs easily dominated the second half. It was fitting they crowned off the best overall performance of the young Premier League season with a fourth goal. With their plus-five goal differential, Spurs sit atop the table. It’s completely meaningless, of course, but it’s a reward fitting of a dominant performance against a dire team.