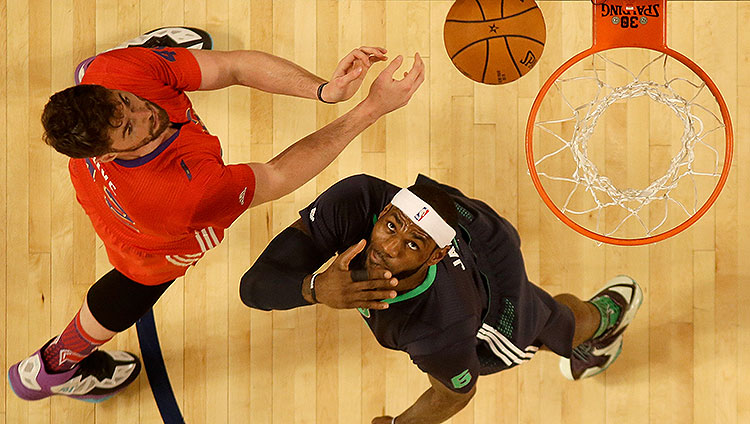 As you surely have heard, two of the NBA’s biggest superstars have washed up on the banks of Lake Erie this summer. LeBron James and Kevin Love have come to Cleveland, where they will join Kyrie Irving to form the newest “Big 3” in the NBA. On paper, the trio seems certain to dominate the Eastern Conference, but as the 2012-13 Lakers showed, NBA dynasties aren’t determined on paper.

Flashbacks of Kobe staring lasers at Dwight aside, Cavs fans have every right to be excited. This new Big 3 not only features James in his prime, but it also gets to figure out how to coalesce among an embarrassingly weak collection of Eastern Conference foes — two luxuries that Lakers squad didn’t possess. James, Love, and Irving are each gifted scorers, but they are all very different, and now that the Love trade is official, it’s a good time to look at how these three top-tier scorers might interact on the court.

It seems like James hasn’t taken a dumb or forced shot since 2011. He is a fairly simple player to break down. Although he can and will score from any spot on the floor, his efficiency is insane inside the paint and mostly average outside of it, with the exception of the corners and that area near the left block where he’s worked so hard to improve.

As I’m fond of repeating, during the 2012-13 season, James led the league in both total points and field goal percentage inside eight feet. It’s a feat he almost repeated last season, but Blake Griffin narrowly surpassed him in close-range production. James still led the league in close-range efficiency, though, converting a ridiculous 75 percent of his shots inside eight feet. 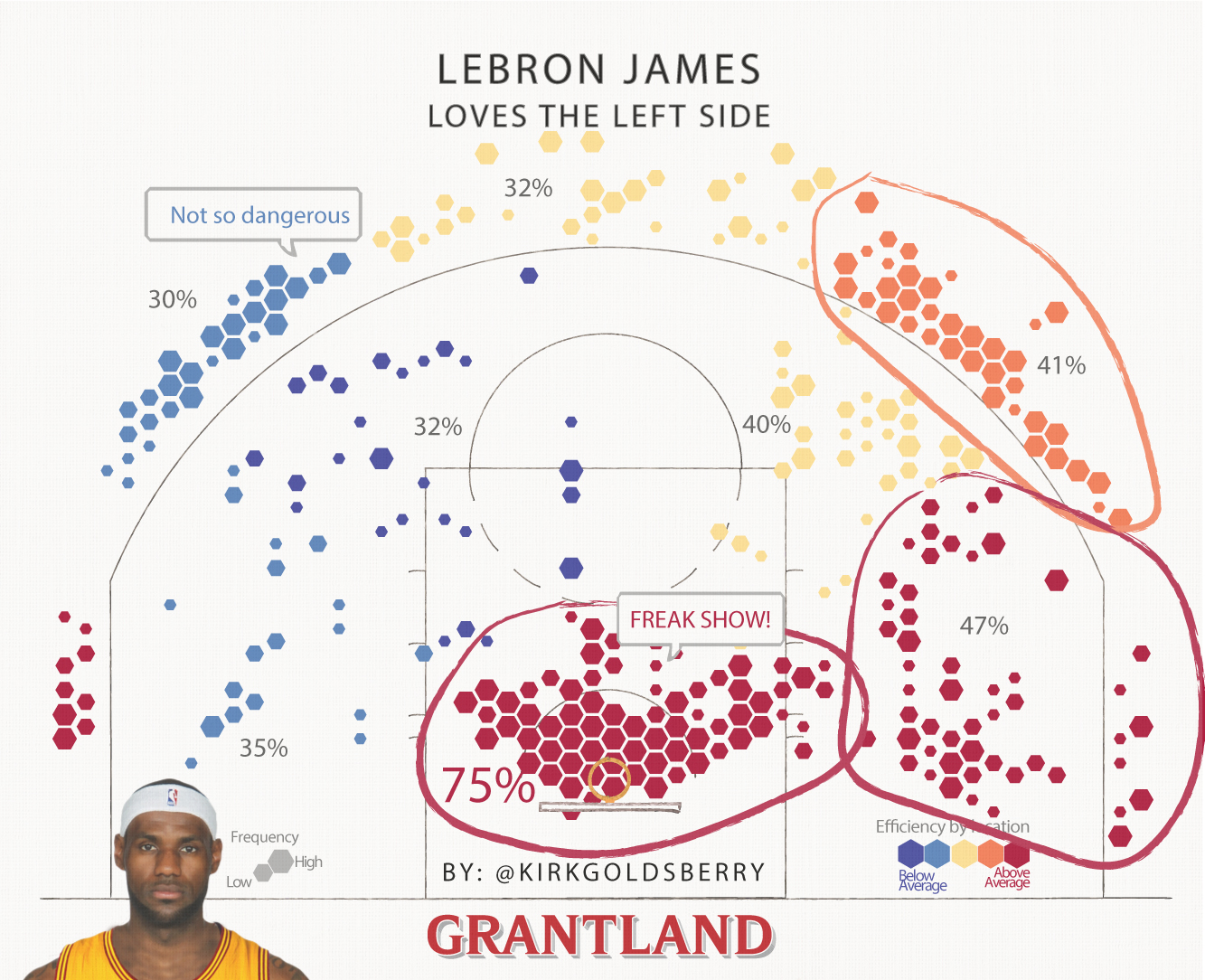 Here’s the thing with James: He’s not just a scorer. He’s also one of the NBA’s best and most unselfish creators, and it’s this trait that’s likely to benefit Love and Irving the most. James was among the league leaders in 3-point assists last year and trailed only John Wall when it came to creating corner 3s for teammates.

I already spilled a lot of ink on this topic recently, but when it comes to assimilating with the Cavs, I think he’ll fit like a Love. Classic dad humor. The most dominant spatial characteristic of Love’s game is his infatuation with the left side of the floor. He possesses one of the most asymmetrical charts in the entire league. Love is, by far, the NBA’s most active shooter from the 3-point area along the left wing. That may not be the case going forward, since Love will no longer have to be the primary scoring option, and James likes to initiate offense from that exact same area. 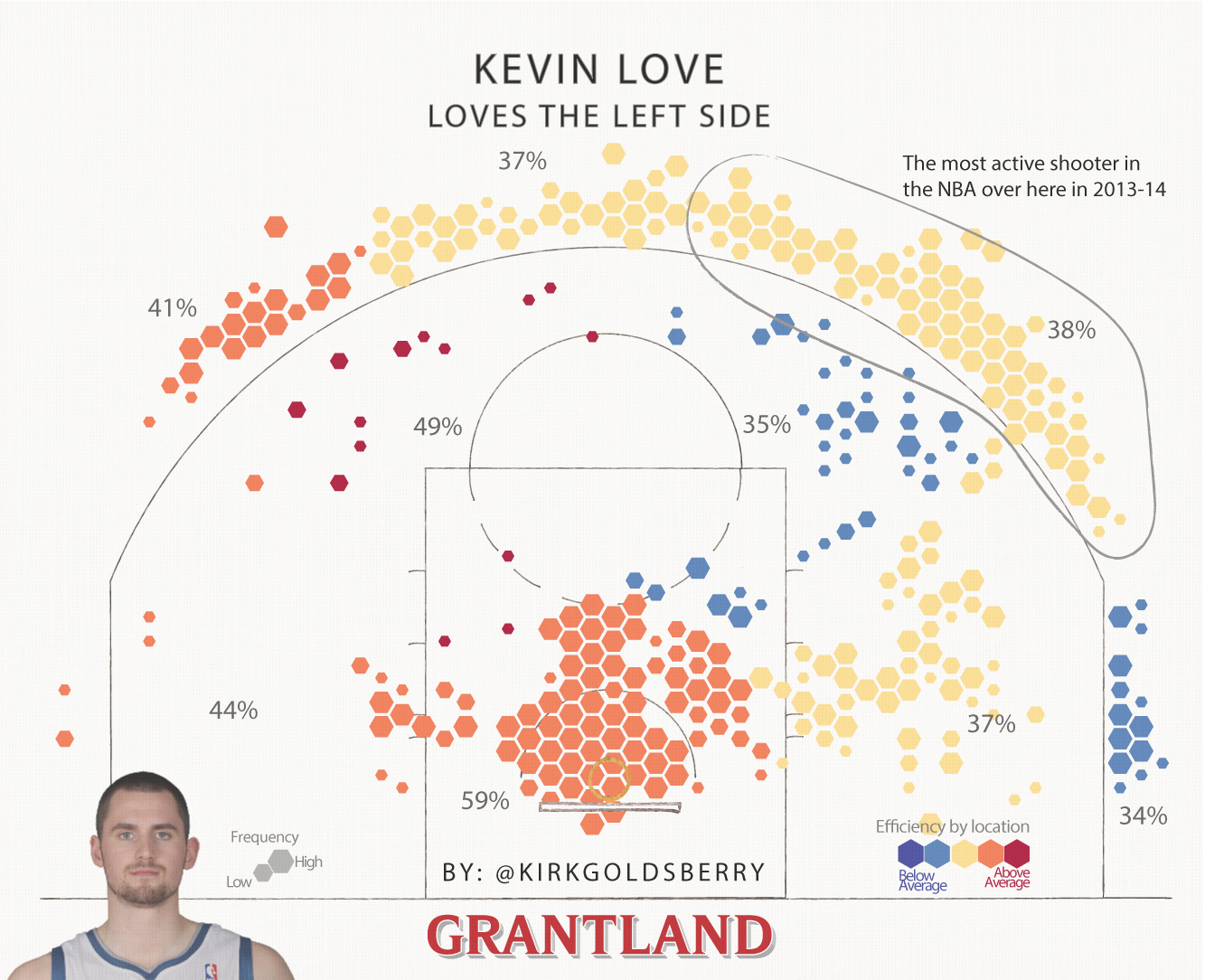 It makes sense to expect some downticks in Love’s usage and perimeter activity with an intertwined increase in overall scoring efficiency from Love the Cav.

Is there anyone in the NBA who’s had a better summer than Irving? He has emerged as one of the go-to playmakers for Team USA, and the arrivals of Love, James, Mike Miller, Shawn Marion, and coach David Blatt will likely revolutionize his NBA career.

Irving was already one of the game’s most creative young scorers despite playing on teams with toxic chemistry, questionable offensive schemes, and a limited supporting cast — hindrances that now appear to be on their way out of his life. 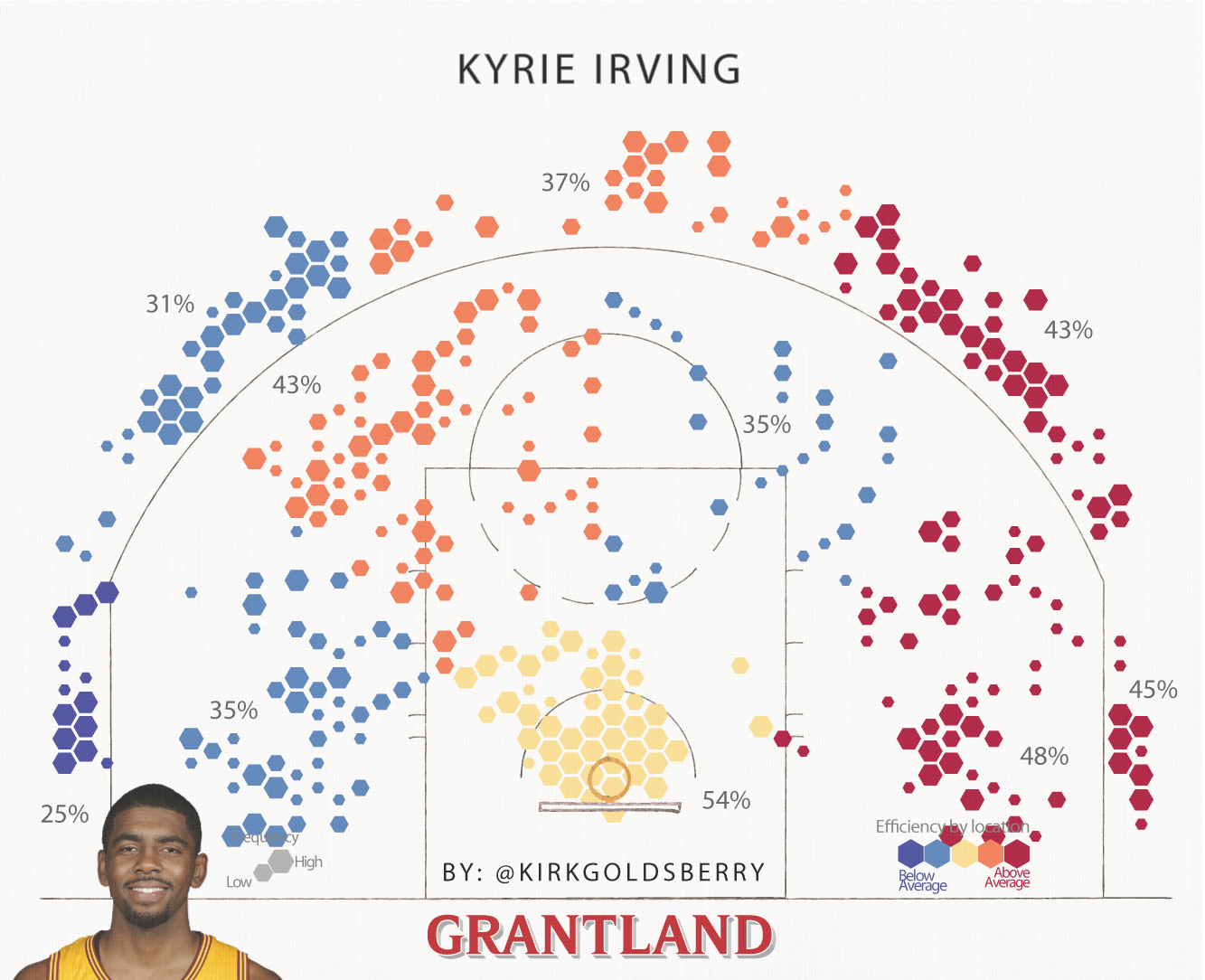 In his first three years in the league, Irving managed to convert his shots relatively efficiently despite having to generate many of them from scratch. He has grown accustomed to scoring off the dribble, and he has developed a knack for using his freakish handle to create shooting space.

However, it’s not unreasonable to expect big gains in Irving’s shooting efficiency, for two reasons. First, given the arrival of James and Love, his usage will certainly diminish, and he’ll have to take fewer tough, self-created jumpers than last season. Second, he will have more higher efficiency, catch-and-shoot chances. Open looks are one of the main perks of being in (or on) the King’s court. Irving’s chart should look a lot more orange and red this time next year.

When looking at the new Big 3’s aggregate shooting performance from last season, a few things jump out. In general, the trio’s composite chart reveals a structure that kind of mimics that of James: dominance in both volume and effectiveness near the basket, supplemented by decent but not earth-shattering efficiency away from it.

One interesting thing to watch will be symmetry. James and Love both prefer the left side, particularly the left block and left wing.

Love had the same overlap on that left wing with Kevin Martin last year, and it’s going to take some creative tactics from Blatt’s staff, along with some spatial flexibility from the players, to ensure this doesn’t become awkward in Cleveland.

Both Love and James have evolved over the years. These are players who have been amenable to change.

With the new Big 3 in place, Cleveland will likely become one of the league’s most prolific interior scoring teams. Both James and Love have demonstrated they can blend volume and effectiveness down there at an elite level. However, it also stands to reason they’re going to be pretty good away from the basket as well. The trio probably won’t break the bank as jump-shooters, but some of the new supporting actors in the Cleveland drama might. 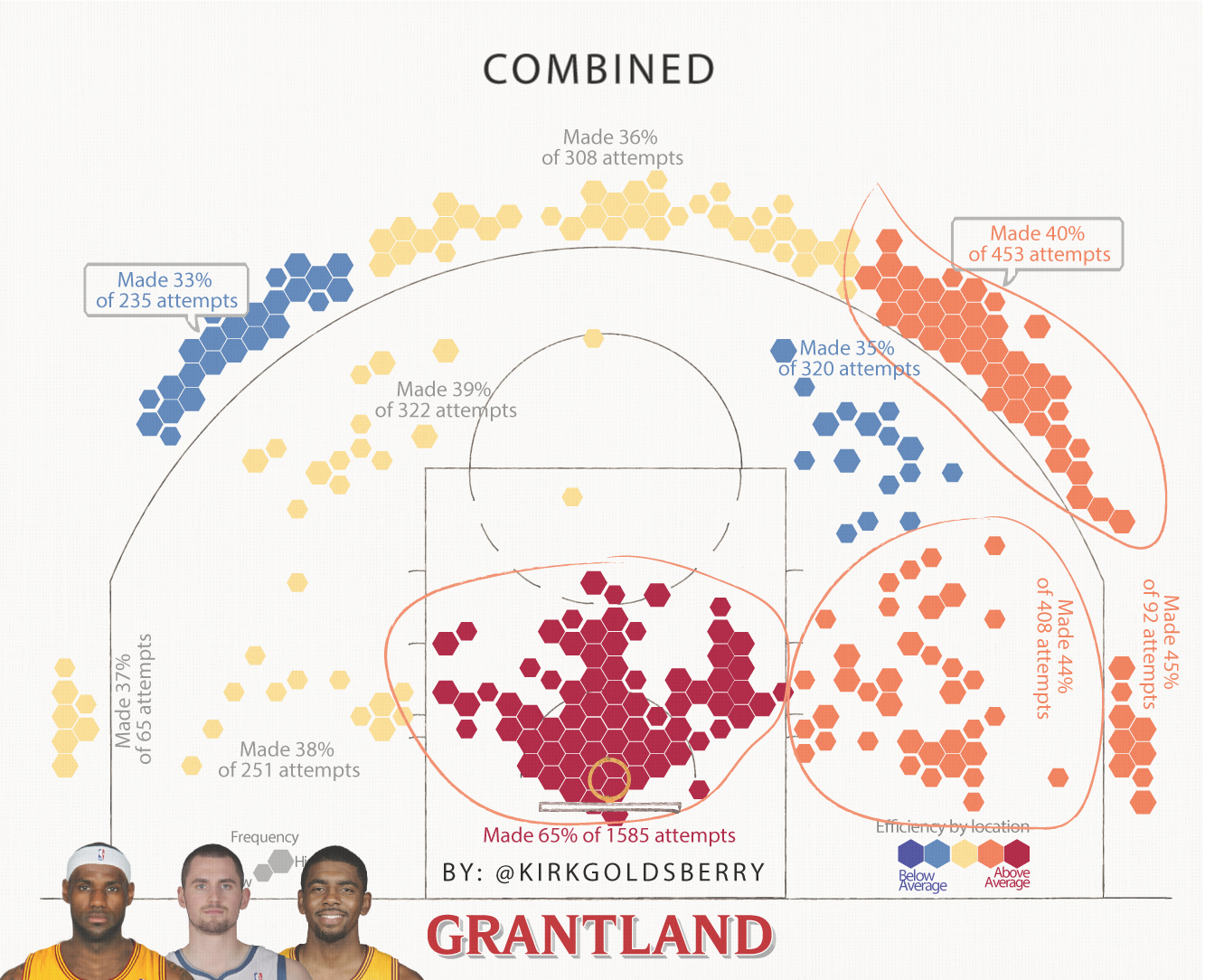 In particular, Mike Miller, who surprised many people around the league last year with his durability and consistency, is one of the league’s top marksmen. He shot an incredible 45.9 percent from downtown last year, playing within a Memphis offense that was the worst in the league at creating 3-point attempts. Additionally, Dion Waiters — who is nothing if not mercurial — has a chance to emerge as one of the key beneficiaries from James’s taste for 3-point assists.

All in all, while Cavs fans obviously have a lot to look forward to, so does everybody else. It’s always fascinating when great players show up to work in a new city alongside new colleagues. The Cavaliers have the potential to play beautiful and successful basketball, but it’s also important to remember that NBA history is littered with the torn-up blueprints for “on paper” dynasties that never reached their potential.

The Day the Rams' Season Imploded