The Day the Rams’ Season Imploded 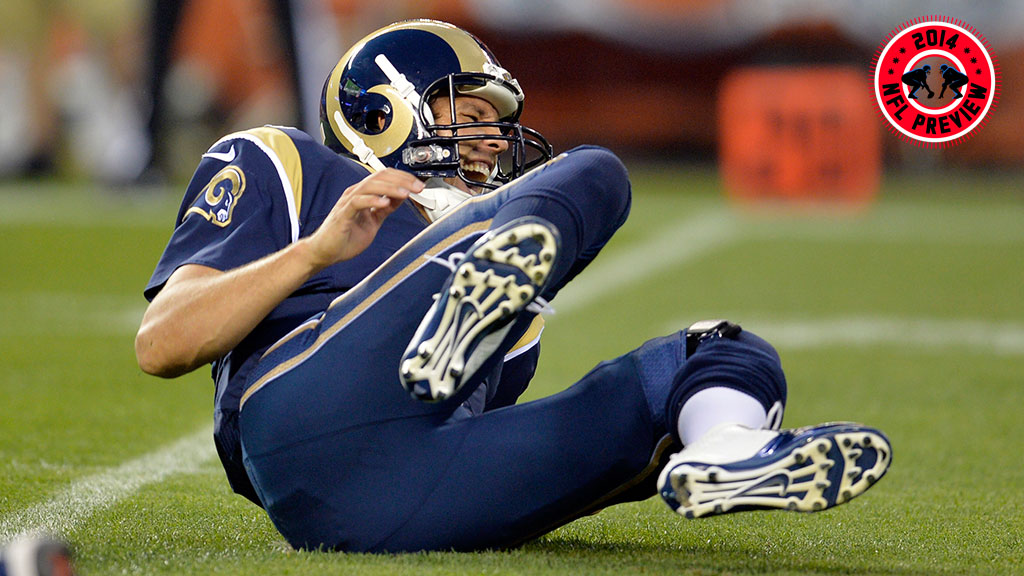 The Rams did this to themselves. When they decided to tread water this offseason and stick with Sam Bradford and his $17.6 million cap hit as their starter for the 2014 campaign, they left themselves with a low-upside, high-downside option at quarterback. This weekend, that downside was realized at the worst possible time. Bradford tore his ACL for the second time in 10 months during Saturday’s preseason game against the Browns, an injury that will end his 2014 campaign before it begins. And even worse, now that this has happened, there’s nothing St. Louis can do to salvage its quarterback situation until 2015.

Every team has to manage the risk of injury as it builds its 53-man roster under the salary cap. No team ever stays perfectly healthy, and there’s no way to predict injuries, but some players and some positions are riskier than others. Outside of the Chad Penningtons of days gone by, Bradford was about as big of an injury risk as any quarterback in football. Nobody could have known that Bradford would re-tear his ACL, but his career has been riddled by injuries — he suffered a serious ailment that kept him out for long stretches of time in three of his past five seasons. A shoulder injury kept him sidelined for most of his final season at Oklahoma, and after a healthy rookie campaign, a high ankle sprain destroyed the second half of his 2011 season. Bradford was healthy again in 2012, but last year, he tore an ACL against Carolina in Week 7. Health is a skill, and Bradford hasn’t had that skill (among others). It’s now an even clearer concern.

Plenty of teams are willing to consider doing business with an injury-prone quarterback, but there has to be a positive tradeoff, either in terms of salary or flexibility. The Rams extracted no such compromise this offseason from Bradford, whose base salary this year is just more than $14 million, the fifth-largest salary in football. Despite having some leverage to restructure Bradford’s deal again after last year’s torn ACL, the Rams chose to play the deal out as written before the injury. Had they cut Bradford this offseason, the Rams would have saved $10 million on this year’s cap and cleared the space out altogether for 2015, when they’ll be ready to consider a Robert Quinn extension. That would have given them plenty of cap space to add another of the veteran backups available in free agency. Given the talent they have elsewhere on the roster and the short path said veteran would have had to a starting job, it would have made St. Louis’s offer more appealing than most. Instead, the Rams will light $14 million on fire.

There was obviously never going to be a good time for Bradford to suffer a season-ending injury, but this was but this was about as bad as it could be. Bradford getting hurt before the regular season begins means the Rams will get nothing from him in 2014, which is obviously bad. I’m not the biggest Bradford advocate, but he’s certainly better than the vast majority of NFL backups. Even getting three weeks out of Bradford would have been better than nothing.

Simultaneously, the injury comes too late for St. Louis to really find a replacement. Free agency obviously ended weeks ago. Whoever the Rams might acquire would need to learn their offensive playbook, a task that can take even veterans weeks. Disastrous performances have come in the past when the likes of Carson Palmer and Josh Freeman have stepped in as midseason acquisitions without weeks to learn their new team’s scheme. It just doesn’t work.

That rules out most of the passers who were linked to the Rams, at least in the short term. There would be negligible value in acquiring the likes of Kirk Cousins or Michael Vick. Likewise, even if the Rams wanted to make a move for a prominent backup like Chase Daniel, they would be forced to pay over the odds for such a deal. The Chiefs would be terrified of starting the season without a viable backup for Alex Smith, and they would be unlikely to give up somebody like Daniel to a desperate team unless they could get a second-round pick in return. And then, even if the Rams acquired Daniel, his contract automatically voids if he throws for 2,000 yards and 12 touchdowns in a season.

The same problem extends to the guy who might be the best possible solution: Mark Sanchez. Sanchez already spent three years with Brian Schottenheimer in New York, so he should know some of the scheme St. Louis is running under its much-maligned offensive coordinator. But it’s unclear whether the best possible solution would actually solve anything. Sanchez was mediocre at best during his time with Schottenheimer, and while he has looked excellent during the preseason, that has come with vanilla schemes in the Chip Kelly offensive attack against second-stringers. Even if you think Sanchez will restart his career in Philadelphia, there’s little reason to think he would do so away from Kelly’s cocoon. And given his success so far, the Eagles surely want to have Sanchez (and not Matt Barkley) as the primary backup to Nick Foles, meaning they would ask for a premium return — someone like Tavon Austin. (The Rams wouldn’t do it, of course, but man, would that be better for Tavon Austin.) Bottom line, it doesn’t fit.

So, if the Rams do want to add a quarterback, they’ll look to acquire a third-stringer, let him learn the playbook for a month, and then be left with the possibility of starting that passer against most of what Football Outsiders projects to be the fifth-toughest schedule in football. Does that sound like something you would want to do with Christian Ponder, Colt McCoy, or Matt McGloin? No? Wait, why are you crying?

The Rams are already probably best situated with the backup they have. Shaun Hill is four years removed from regular action and turned 34 in January, but he was a competent quarterback during his time filling in for the likes of Alex Smith and Matthew Stafford, throwing 41 touchdowns against 23 interceptions while completing 61.9 percent of his passes. His Pro-Football-Reference.com Index Statistics paint him as a league-average quarterback during his time in the NFL. Of course, he won’t have Calvin Johnson to work with in St. Louis. Hill doesn’t project as all that much worse than Bradford, but the problem then becomes figuring out what happens if Hill gets hurt. The third-string job is in competition between sixth-round pick Garrett Gilbert and former Southern Miss walk-on Austin Davis; Keith Null, presumably, is just a tweet away.

About the only thing you can really hope happens with St. Louis is that it doesn’t make this mistake again. The brain trust of head coach Jeff Fisher and general manager Les Snead brought Bradford back based upon the promise of what he had done in limited time and the expectation that he would be healthy in 2014. They obviously felt there was more evaluating to be done, even if that didn’t match the public’s perception. Now, after another wasted year, they can’t afford to make that same mistake again. If they’re still employed next offseason — and if the Rams are awful this year, Fisher and Snead very well might not be — they can’t afford to pay $16.6 million to hope for the privilege of seeing a healthy Bradford suit up. They’ll save nearly $13 million on the 2015 cap by releasing Bradford, and while he could end up as a low-cost success story for another organization, the Rams need to use that money to work on the rest of their roster.

Regardless of what happens, the Rams have failed to take advantage of the opportunity presented to them over the past several seasons. They traded away the opportunity to draft Robert Griffin in 2012, and while that may end up as a great trade, one of the advantages afforded to them by making it was the ability to use some of the Griffin bounty to ensure they ended up with a quarterback. If Bradford worked out, great; if not, they could use one of their extra draft picks to acquire his replacement. Now, with those Washington picks having come and gone, the Rams don’t even have a possible quarterback of the future, let alone a franchise quarterback. The only silver lining in the Bradford injury is that they’ll probably have a high pick with which to draft a quarterback in 2015.