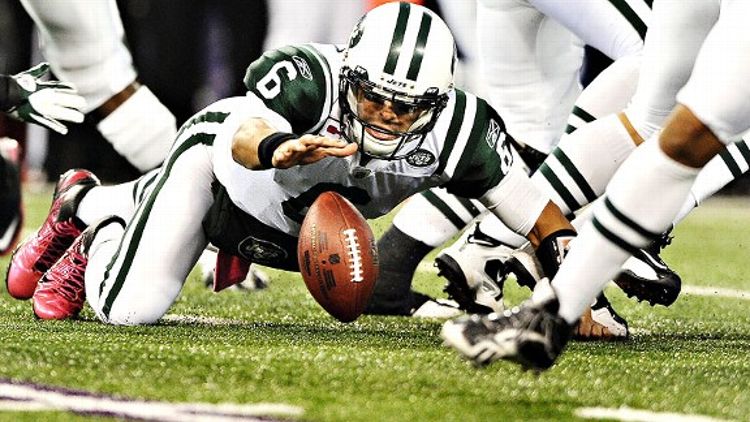 As Sunday’s afternoon games were winding down, it looked as if we were headed toward a relatively quiet week in the BQBL. Aside from Tony Romo Romoing his Cowboys into another fourth-quarter collapse, there just wasn’t any one QB who stood out below the rest — until Mark Sanchez took the field against the Baltimore Ravens. Sanchez was so good at being bad Sunday night that after his second fumble was returned for a touchdown, any BQBLer with a heart stopped rooting for his failure and simply started rooting for his survival. The Ravens defense threw a party Sunday night, invited Mark Sanchez, and then treated him like a tackle dummy. They just kept viciously hitting him and hitting him until footballs were flying everywhere and his BQBL score was in triple digits.

New York Jets, Mark Sanchez, 105 points: The very first time Mark Sanchez touched the ball, he dropped back, pump faked, and was blindsided by Ed Reed and a flying tomahawk chop. He lay on his stomach stunned, as he watched a caravan of Ravens defenders escort the football into the end zone. It was going to be a difficult night for Sanchez, who was without injured center Nick Mangold, and facing a defense without mercy, pity, or restraint. Sanchez was 11-for-35 and had four turnovers, three of which were returned for touchdowns. His best throw of the night came in the second quarter when Haloti Ngata planted his facemask in Sanchez’s spine with such force that the football launched 20 yards into the air toward the sideline, where it was scooped up by Ravens linebacker Jarret Johnson, who ran the ball into the end zone. After his third-quarter pick-six to Lardarius Webb, Sanchez was suddenly responsible for three touchdowns for the wrong team. We might never see a BQBL performance like this again, or at least not until Week 10, when the Ravens defense heads to Seattle and lines up across from BQBL MVP favorite Tarvaris Jackson.

Baltimore Ravens, Joe Flacco, 61 points: The Jets and Ravens combined to score 51 points Sunday night, and they did it while scoring only one offensive touchdown. While Sanchize was getting pulverized, Joe Flacco was quietly putting together an impressive BQBL week of his own. He went 10-for-31 for 163 yards and threw a very curious pick-six. Rex Ryan is known for drawing up unique blitz packages, and in the second quarter, he threw a new wrinkle at Flacco with the running back blitz. Joe McKnight lined up on defense and stormed the backfield untouched. Granted, he just kind of ran past Flacco with his arms at his sides like he wanted to give Flacco a low-five, but it confused the former Fighting Blue Hen so much that he threw a pass right to Jets linebacker David Harris. Flacco was soon awkwardly diving at Harris’ ankles on his own six yard line, attempting to bring him down. Next season, there should be bonus points for missing tackles that lead to touchdowns. Quarterbacks attempt to make tackles like you or I would. Watching QBs miss tackles is almost as fun as watching Vince Wilfork return their interceptions.

Dallas Cowboys, Tony Romo, 56 points: The Cowboys lead 27-3 with 10:30 left in the third quarter. Tony Romo drops back, stares down his receiver, and then throws the ball right into the hands of his good friend Bobby Carpenter, who was a groomsman at Romo’s wedding … and is a linebacker for the Detroit Lions. Carpenter deftly ran the ball into the end zone for a critical touchdown that was the butterfly-wing flap that would lead to the Lions’ scoring tsunami and eventual come-from-behind win. Romo followed up that pick-six with a second, and before you know it he was throwing off his back foot from his own ten-yard line, sending a pass into the arms of Lions linebacker Stephen Tulloch for his third interception of the game. At this stretch in the second half, Tony Romo was 3-for-11 — three interceptions for 11 pass attempts. Watching Cowboys games is now like watching a rerun of Goodfellas. The first half of the game is the fun part when Henry and Tommy are rising through the ranks of the New York underworld, selling cigarettes out of the trunk, busting balls at nightclubs, and keeping their mouths shut when they get pinched. The second half of the game is the part when Tommy gets whacked, and Henry is doing piles of blow and turns into a federal witness. I swear if you start a Goodfellas DVD at the exact same time as the next Cowboys’ game the two will match up perfectly like The Wizard of Oz and Pink Floyd’s Dark Side of The Moon.

The billboard was up and the Broncos were headed to Lambeau Field. Time for the second installment of “Tebow Watch,” where we track Tim Tebow’s every move until he inevitably becomes Denver’s starting quarterback.

10:35, first quarter: There is a lot of talk about “The Tebow Package” that Nantz and Simms were sworn to secrecy about. Giggles.

0:51, first quarter: Orton throws a pick-six. How long does this have to go on before we get Tebow?

Halftime: Where is Tim Tebow? Tebow was all over the place for the first five minutes of this game and now I haven’t seen him for a quarter and a half.

3:21, third quarter: Wow. Hell of a pass from Orton; this can’t be good for Tebow Watch.

0:24, third quarter: Orton’s first incompletion since first quarter. This is really not good for Tebow Watch. Who is this man in Kyle Orton’s uniform?

End of the third quarter: Tebow sighting. Phew, I thought he left to invent socks that never get wet or cure AIDS or something.

11:55, fourth quarter: Terrible throw from Orton, missing a wide-open Brandon Lloyd in the end zone. We are now at the point where the camera cuts to Tebow on the sideline after every Orton mistake. That is a good sign.

5:40, fourth quarter: Jim Nantz: “If you are down 49-17, would this not be an appropriate time to give Tebow at least some reps if you are thinking of later on in the season making a quarterback change?”

Phil Simms: “You are not giving up the season yet, don’t create that controversy if you don’t have to.”

You have to. You are down by 32 points. Create the controversy already.

5:31, fourth quarter: Tebow in helmet, stretching. He sure stretches a lot for a dude who only played one down.

4:54, fourth quarter: Phil Simms: [Shot of Tebow with his helmet on] “Sooner or later, the Broncos are going to have to make a decision. Are they going to stick with Orton or see what they have got?”

3:02, fourth quarter: What? Matt Flynn is in at quarterback for the Packers? Now they are just mocking us … WHERE IS TEBOW?

Check in next week for more updates on Tim Tebow’s facial hair and/or stretching routine.

Washington Redskins, Rex Grossman, 32 points: Sexy Rexy didn’t actually play as bad as his BQBL numbers would indicate. He completed more than 50 percent of his passes, threw a nice touchdown pass, and one of his picks was off his receiver’s hands. But just as you were saying, “Ya know what, Rex Grossman actually isn’t playing that bad this we—” he threw a terrible pick with about five minutes left on the clock.

Jacksonville Jaguars, Blaine Gabbert, 26 points: The Jags are dead last in the league in points and dead last in passing yards. If you are the offensive coordinator, wouldn’t you just go Boise State on everyone and start running trick plays? I think this desperation could usher in a new era of offensive football where at least one lateral is used on every down.

Miami Dolphins, Chad Henne and Matt Moore, 26 points: Matt Moore is the future of Florida sports. He’s a young prospect thrust into the national spotlight, and he’s performing way above expectations. Too bad he is a pitcher for the Tampa Bay Rays. The Dolphins’ Matt Moore doesn’t exactly show the same promise.

Arizona Cardinals, Kevin Kolb, 20 points: Kevin Kolb, don’t get bummed out because you scored 20 BQBL points. You went 20-for-34 for 237 yards, and you would have won the game if the refs had realized Victor Cruz was so dumb he would simply give the other team the football, later explaining, “I thought somebody touched me.”

Draw It Up: Blount's Game-Winning Touchdown