The 5 Biggest NFL Injuries of the Week: Henry Melton, Anthony Spencer, and More 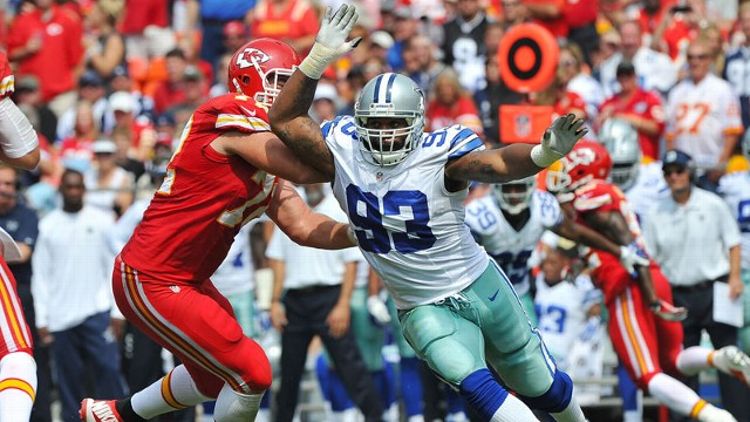 Impact: Defensive end was a position of turnover for Detroit this offseason, as the Lions replaced long-time starters Kyle Vanden Bosch and Cliff Avril with fifth overall pick Ziggy Ansah and free-agent signee Jones. Jones spent portions of his first five seasons in the league at both defensive tackle and defensive end, where he was typically a much more valuable player against the run than while rushing the passer. His five sacks as a rookie were the most he’d ever collected in a season.

He was technically Detroit’s starter at left defensive end, but even before the injury, both Ansah and Willie Young were already getting more snaps for the Lions’ defense. With Jones out, it will probably be Israel Idonije that takes over as Detroit’s third defensive end. Idonije is coming off three good years as a starter at both tackle and end for the Bears, but he’s 32, and Alfred Morris’s long touchdown run Sunday came when Idonije failed to hold the edge on the left side of Detroit’s defense.

I’d say losing Jones isn’t as troubling as losing a typical starter would be, for two reasons:

1. With Ansah’s lack of production in college, the concern was that it would take at least a few games for him to settle into the pro game, let alone be a reliable starter. Three games into his rookie season, he’s already there. There are moments when he looks out of place against the run, but more often, he’s making the type of plays Detroit envisioned when it took him in the top five.

2. This is anecdotal, but as a Bears fan, Young is a player I’ve always noticed whenever the Lions play Chicago. He only has four career sacks, including one this season, but with limited snaps, he tallied a lot of hurries two seasons ago. Detroit’s run defense might suffer a bit with Jones gone, but the Young-Ansah combination is its best pass-rushing duo on the outside (to go along with one of the two best pass-rushing defensive tackles in the league).

Impact: The weirdest injury of the week in Arizona definitely goes to safety Rashad Johnson, who lost the tip of his left middle finger on Sunday while tackling Darren Sproles — and didn’t notice until he later took off his glove. He tweeted a photo. You can check it out, if that’s your thing.

But while Johnson is playing this week, Acho and Alexander will likely be watching from home. Arizona’s base defense is hard to define, and when it comes to naming “starters,” it really does mean who was on the field for the first play. Against New Orleans, both Acho and Alexander qualified, but the Cardinals do have some options with both players gone.

The other rotation edge players in Arizona’s hybrid front (Matt Shaughnessy and John Abraham) have more experience as defensive ends in a 4-3, so with Acho and Alexander gone (and rookie OLB Alex Okafor, lost for the season with a torn biceps), it will probably mean more four-man looks from the Cardinals.

The most significant change is that Arizona will be taking players it saw as situational, complementary pieces and moving them into full-time roles. Abraham is 35, and the player who will be spelling him, Frostee Rucker, is 30. The Cardinals have both the ability to adjust schematically and the talent inside (with Calais Campbell and Darnell Dockett) to withstand losing Acho and Alexander, but it does limit the versatility that has defined the Cardinals front seven in recent years.

Impact: As a man who would risk bodily harm to save a pizza, I feel for Burleson. The Lions wide receiver was trying to prevent a pizza from sliding off his car seat when he crashed into a median wall early Tuesday morning and broke his arm. All jokes aside, I’m glad Burleson is OK. The accident came on a highway, and the police officer called to the scene said Burleson was lucky to walk away with only that injury.

In terms of the football ramifications, it’s nothing new for Detroit. Burleson missed the final 10 games of last season, and the Lions played most of the second half without a true no. 2 receiver after Titus Young was benched for intentionally lining up incorrectly against the Packers in Week 11.

The timing for losing Burleson now is better than it might have been three weeks ago. When Detroit took Ryan Broyles in the second round of last year’s draft, at least part of its decision-making process had to be that Broyles could be a worthy second option to Calvin Johnson if the Young situation went south. Sunday was Broyles’s first game back after tearing his ACL last season, and his snaps should increase as the season moves along. Even with Broyles working his way back, Burleson’s absence will probably mean more of Kris Durham, who caught one pass on his 21 routes run Sunday (and has 13 catches in two-plus seasons).

The player who may actually be able to best mitigate the damage from losing Burleson isn’t a wide receiver at all. With the way teams account for and bracket Johnson, the underneath parts of opposing defenses are often ripe for Detroit to exploit. That’s where Reggie Bush comes in.

This is the play on which Bush was injured against the Cardinals. At the moment Matthew Stafford releases the ball, the closest Arizona safety is 30 yards away. This is a third-and-3.

When lined up as a wide receiver, Bush is very capable of beating man coverage (especially when defenses make the mistake of manning him up with a linebacker), and when he does, there’s plenty of space with which to work. One solution might be using Bush and running back Joique Bell (who’s probably been Detroit’s third-best player on offense) together. Either way, even though losing Burleson hurts, a healthy Bush remains the key to the Lions’ offense.

Impact: Melton’s injury (and Anthony Spencer’s, which we’ll get to in a second) is one of the shittier types any NFL player ever has to deal with. Last season, Melton was one of the best pass-rushing defensive tackles in the league. His six sacks, nine tackles for loss (good for fifth among defensive tackles), and role within the league’s best defense (as measured by DVOA) was enough to earn him his first trip to the Pro Bowl. In the offseason, Chicago chose to place the franchise tag on the 26-year-old Melton rather than signing him to a long-term deal, and the torn ACL leaves Melton as a player coming off an injury and without a contract going into next year. This is probably when we should reiterate that the franchise tag is bullshit, and this is why players really, really hate it.

As for how losing Melton affects the Bears, it’s harder to say. Melton played a significant role in the Bears having an above-average pass rush last year, but this season, he hadn’t done much through the first two and a half games. The player replacing him, Nate Collins, is a 25-year-old, fourth-year pro who played well for the Bears last year and had actually outplayed Melton before the latter went down.

But that isn’t the entire picture. Melton missed the final three weeks of the preseason with a concussion, and there’s a chance he wasn’t quite back up to game speed after being held out of practices for nearly a month. Through three games, the Bears’ pass rush from their defensive line has been, to say the least, worrisome. Chicago’s front four has been responsible for exactly two sacks, and their hits and hurries numbers are just as dismal. Losing Melton may not make the Bears’ defense any different than it’s been for the past three weeks, but it does limit how good that defense could have ultimately been if Melton had returned to form.

Chicago’s past success on defense has been predicated on creating pressure with its front four. Last season, the Bears sent only four rushers on 74 percent of its plays, the sixth-highest figure in the league, according to Football Outsiders. They also had the eighth-most sacks in the league while finishing in the bottom five in percentage of sacks by both linebackers and defensive backs. Typically, the Bears do not want to blitz. Without Melton, and without a pass rush, they may not have a choice.

The Bears’ depth at defensive tackle was already nonexistent, so one solution will likely be moving either Corey Wootton (who rotates with Shea McClellin at defensive end) or Julius Peppers inside on passing downs to spell Collins.

Prognosis: Out for season

Impact: Like Melton, Spencer was a franchised player coming off his first trip to the Pro Bowl last season, when he was also playing under the franchise tag. What makes his situation even worse is that by the time Spencer hits the free-agent market in February, he’ll be 30 and coming off microfracture surgery. Spencer had a procedure on his left knee in July, and after missing the entire preseason and the Cowboys’ opener, he played 34 snaps against the Chiefs in Week 2 before being held out last week against the Rams because of soreness.

With Spencer out, George Selvie should remain the starter opposite DeMarcus Ware at defensive end. The Cowboys are Selvie’s fourth team in four seasons. After being drafted in the seventh round by St. Louis in 2010, he bounced around with the Jaguars and Panthers before eventually landing with Dallas and playing himself into a job during the preseason. He continued the production in Week 1 against the Giants, when he recorded a sack and a couple hits of Eli Manning, but based on what we saw from Carolina last week, getting pressure against the Giants might not mean much.

Even if Selvie could replicate what he did against the Giants for 16 games, he still wouldn’t have the impact Spencer had for the Cowboys’ defense last year. The former first-round pick had his best season by a wide margin in 2012. His 11 sacks are impressive on their own, but they’re even more impressive when you consider that Spencer only rushed the passer on about 65 percent of downs last season (according to Pro Football Focus). The move to 4-3 defensive end would’ve been a significant transition for the 260-pound Spencer, but he didn’t exactly show much trouble in holding up against the run last season. Spencer was one of the better defensive players in the NFL last year, and even with the position change, he isn’t someone whose production is going to be replaced by the likes of Selvie, Edgar Jones, and Kyle Wilber.

Short-Term Injuries of the Week