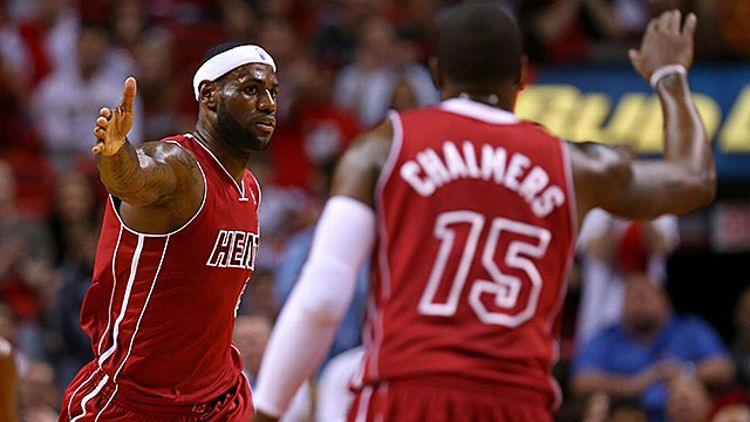 Mario Chalmers is a human with a cell phone so I sent him some text messages.

Me: Hey, man.
Mario: Hi.
Me: what’s up? How are you?
Mario: good
Me: I saw the game the other night
Mario: which one?
Me: come on
Mario: I’m in the NBA. I play a lot of games.
Me: you know the one
Mario: against the Celtics?
Me: dude
Mario: against the bucks?
Me: the who?
Me: don’t run from this
Me: it’s fine
Me: we can talk about it
Me: the Indiana game
Mario: oh
Me: it wasn’t that cool for LeBron to yell at you
Mario: well
Me: were you scared?

Mario: what?
Me: because he’s big
Mario: so
Me: I mean, he’s BIG. He’s like if a stegosaurus was yelling at you.
Me: OH MAN IMAGINE A STEGOSAURUS IN A HEADBAND SHOOTING A 3-POINTER THAT’S THE BEST THING
Me: what kind of defense would you play against a stegosaurus???
Mario: wtf are you even talking about?
Me: I remember I was playing basketball in middle school at a game or whatever and the coach started yelling at me and I for real just started crying and went and sat down
Mario: dude
Me: do you know what I did when I got home?
Mario: cried more
Me: bingo
Me: did you cry? Afterward, I mean. After LeBron yelled at you?
Mario: no
Me: did it hurt your feelings?
Mario: dude
Me: did you talk to him about it? You should’ve just gone up to him like, “hey, man. I didn’t think it was that cool for you to yell at me like that in front of everyone and also all of America.”
Mario: right
Me: Then he’d have been like, “RRRRAAARRRRRGGGHHHHHHH”
Me: BECAUSE HE’S A STEGOSAURUS
Me: GET IT? HAHAAHAHAAHAHAHAA THAT’S A LITTLE THING CALLED A CALLBACK
[No response.]
Me: Hello?
[No response.]
Me: :( man, that was probably the best stegosaurus joke I ever told
Mario: it wasn’t very good
[No response.]
Mario: yo
[No response.]
Mario: hello?
[No response.]
Mario: jesus christ are you crying again?
Me: MAYBE I AM, MARIO, AND MAYBE I’M NOT, MARIO, IT’S NOT YOUR PROBLEM
Mario: you gotta chill, man
Me: I HAVE A LITTLE THING CALLED FEELINGS, MARIO. MAYBE YOU HEARD OF THEM? I KNOW YOU HAVE BECAUSE I WAS JUST TALKING TO YOU ABOUT THEM, MARIO. THAT’S A LITTLE THING CALLED BEING CAUGHT IN A SNARE TRAP.
Mario: the joke was fine
[No response.]
Mario: it was good
[No response.]
Mario: it was funny. Real funny.
Me: you really think so?
Mario: … yes
Me: that’s nice of you to say, Mario
Me: you’re a nice guy
Me: I feel kind of bad for all the bad stuff I said about you after your rap video came out
Mario: :/
Me: what a weird thing that was
Me: it was funny that you were like, “you know what would really be dope? You know what would really set this video off? If I was dribbling a ball while wearing slacks! BOOM! SOMEBODY CALL THE GOVERNMENT AND LET THEM KNOW THAT I JUST CRASHED THE STOCK MARKET BECAUSE I AM SO MONEY!!!!”
Mario: I didn’t say any of that
Me: I mean, but you basically did
[No response.]
Me: OK, I have to go, man
Mario: bye
Me: stay easy. Tell LeBron I said what’s up
Mario: I’m not gonna do that
Me: OK. Well at least tell Wade then
Mario: no
Me: Ray?
Mario: nope
Me: Joel Anthony?
Mario: … all right.