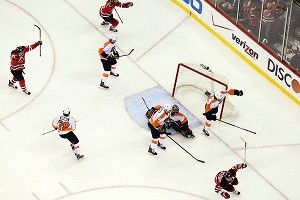 Shortly before Alexei Ponikarovsky followed up on his own shot to give the New Jersey Devils a 4-3 win over the Philadelphia Flyers in Game 3 of the Eastern Conference semifinals, New Jersey’s Ilya Kovalchuk had collected his own rebound too.


Kovalchuk looped behind the Philadelphia net and skated up to the point, had a pass deflected out of the zone by Danny Briere, recovered the puck and swung back with it, idled … then let go of a casual-looking pass that was actually a laser right up the center of the neutral zone to a fresh-off-the-bench Ponikarovsky, who caught the Flyers on an awkward line-change attempt. The sequence resulted in the game-winning goal (and, shortly thereafter, some fist-pumping from a passionate Kovalchuk).

It was Kovalchuk’s second assist of the game; he also scored a goal in the first period. The series has only lasted three games, but it’s practically been a play in three acts for Kovalchuk already.

When the Devils, who lead the series 2-1, won Game 2 by the score of 4-1, Kovalchuk did not dress or even travel with the team, finally confirming ongoing speculation that he had been playing injured. Eyebrows had been raised, particularly by his Game 1 performance in the 4-3 OT loss to the Flyers. Kovalchuk was missing a step, recording a rare zero shots and making a mistake that contributed to a Flyers goal.

Going a few games without goals in the regular season is one thing. In the playoffs, just a few days without production will suddenly put you on the hot seat. (Just ask Marian Gaborik or, more recently, even Claude Giroux.) And absurdly, Kovalchuk began to get lumped into conversations about the NHL’s “””Russian problem.””” (I couldn’t put enough scare quotes around that if I tried.) A Star Ledger headline called the ailing Kovalchuk’s Game 1 “another disappearing act,” and the article by Steve Politi made the obligatory barb about Kovalchuk’s infamous contract.

After his three-point Game 3, though, the same writer admitted: “This is why, bad back and all, the Devils need Ilya Kovalchuk for a chance to do something special in these playoffs.” He now has nine points through nine playoff games.

Kovalchuk’s scoring often overshadows his passing, but he’s been on the playmaking end of the puck for several big Devils goals this postseason. The chemistry between Kovalchuk and Travis Zajac, who played only 15 regular-season games due to an Achilles injury, has been noticeable. Ponikarovsky and Zajac both assisted on Kovalchuk’s goal, which came midway through the first period and just 20 seconds after he’d helped set up Zach Parise for a power-play score.

And in a must-win Game 6 against the Florida Panthers, Zajac set up Kovalchuk for a second-period goal and Kovalchuk returned the favor in overtime with a beautiful pass to Zajac for the game-winner.

“When you play with Kovy, you’ve got to be ready for the puck,” Zajac said after that game. “You know he’s going to make plays. He can pass through guys, through skates.”

Or, as he did Thursday night, straight through the center of the neutral zone, after skating the puck nearly the whole length of the ice — and with a motion so effortless it practically looked like a shrug.