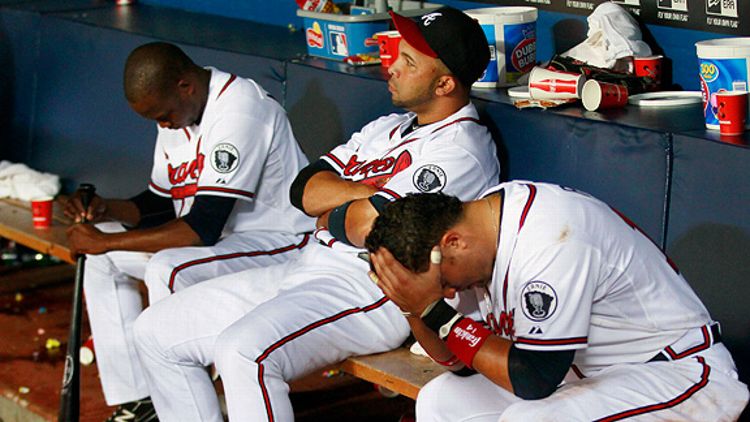 Editor’s note: This post has been updated to clarify the time of T.I.’s release.

Late Wednesday night — Freddie Freeman grounds into a double play. Out no. 3. Phillies win. Braves blow an 8½-game wild-card lead and fail to make the playoffs. Season over.

The early hours of Thursday: Clifford “T.I.” Harris is released from a halfway house. A free man. Again.

These events are oddly connected, but neither should surprise, and neither should make one overly emotional. We should, unfortunately, be used to this by now.

The Braves get our hopes up over the course of a few months, the comical thought of us sweeping the World Series and having a parade down every “Peach”-themed street begins to seep into our subconscious, and then they blow it and don’t even make the playoffs.

T.I.’s freedom gets our hopes up because we think this is the time he stays out for good, but deep down we know that a free T.I. unfortunately starts the countdown clock for a jailed T.I.

We want to be sad about the Braves demise, but deep down, we knew it would happen. We also want to be excited about a free T.I., but (less) deep down (shallower, if you will) we know it probably won’t last.

Both the Braves and T.I. have made Atlanta extremely proud at the peak of their existences. The Slide, the ’95 World Series, “Rubber Band Man,”, and ATL. These events aside, they have also spent the past few years not fully living up to their potential and letting down the people around them.

The unofficial Team of the South and the King of the South have made a career of disappointing their friends and family, their city, and their millions of still loyal fans. The only people whom they truly haven’t let down is themselves, which is easily the major problem at hand. To put it plainly: T.I. and the Braves won’t let T.I. and the Braves be great.

The worst thing about the success of the ’90s-era Braves is that the franchise is still content with its ’90s prowess. The talent is there, but there seems to be no sense of urgency to be great again (the “There’s always next year” mentality), which is exactly how you blow an 8½-game lead.

The worst thing about T.I. is that he loves jail. He’s great at jail. Freedom, not so much.

It’s no fun being so cruel to two of my favorites, but as they say, you’re often hardest on the ones you love (from afar) the most. The Braves and T.I. are right up there with Barack Obama, Facebook, and laughably elite private schooling in that sense. I have to be this hard — we all do — or nothing is going to change. Both have proven to us that they will not change their ways on their own. No chance. We must push them to be better, or at the very least to simply act like adults.

I hope each takes this newfound freedom that they’ve brought on themselves and thinks less about how to prepare for the future, but more about how everyone is one more slip-up away from permanently jumping on another bandwagon (Atlanta Dream, Waka Flocka Flame).

Consider this a warning, Clifford and Bravos. In two years, when I’m destroying a gallon of onion rings at The Varsity with Jason Heyward, Brian McCann, and T.I., I hope we are laughing at how much things have changed since this blog post was written. I hope this for your sake, but mainly for the rest of us.