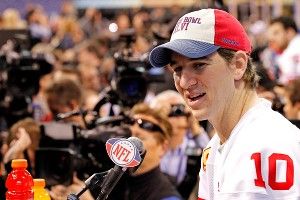 Hey you, yeah you with all the disposable income. You know what stimulates the economy? Casual sports gambling! But we’re not throwing you in the deep end without some floaties here. The Triangle has contracted one of Vegas’ most astute handicappers to help you navigate these choppy waters before the Super Bowl. Here’s what Erin Rynning had to say.


New England Patriots vs. New York Giants — OVER 54
Look for the Patriots to run as much hurry-up, no-huddle offense as possible in the big game. This was perhaps their monumental mistake four years ago, when they only scored 14 points against the Giants in Super Bowl XLII. Quarterback Tom Brady will keep his offense moving, and getting rid of the football as quickly as possible will be the theme of New England’s attack. Meanwhile, the Patriots’ defense just doesn’t have an answer for Eli Manning and New York’s passing game. It has struggled mightily this year (as we all know), but — importantly — those struggles have been against a weak schedule of offensive teams. Since the Patriots faced the Giants in Week 9, the opposing schedule of quarterbacks is laughable. The list includes: Mark Sanchez, Tyler Palko, Vince Young, Dan Orlovsky, Rex Grossman, Tim Tebow, Matt Moore, Ryan Fitzpatrick, and Joe Flacco. The red-hot Giants receivers and Manning will carve up the Patriots’ secondary. With perfect conditions in Lucas Oil Stadium, a plethora of points will be scored.