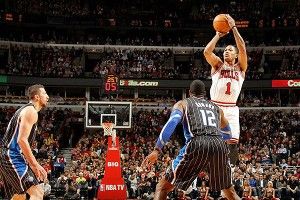 What Was At Stake

Faith in each team’s current construction as they move forward. Stan Van Gundy’s comments after his team’s 100-84 loss against Charlotte on Tuesday had a strange sense of both reason and reservation. “Our guys are satisfied that we came in with the third-best record in the East and the fifth-best record in the league,” Van Gundy said. “They’re satisfied with that. I don’t think there’s any push to be better or any push to be great. If there is, it doesn’t show up in games.”

“This is who we are. Whether we change that or not, I don’t know.”

The statement reads as if it’s completely directed at Van Gundy’s star center, and with the trade deadline a week away, that final sentence is the issue Orlando hopes to solve in the next six days. With a Dwight Howard who has a desire to dominate games, are the Magic capable of competing for a title? Or will refusing to trade him cause an irked Howard to both torpedo the Magic’s hopes this season and prevent them from exchanging him for pieces?

For the Bulls, Thursday night was another instance of having to ask the same strange question that has persisted the past two seasons. Even with the best record in the NBA, there is a sinking feeling that as currently constructed, Chicago cannot beat the Heat. For both analysts and fans (of which I count myself), a league-best scoring differential or an All-Star game for Luol Deng provide little comfort among flashbacks of LeBron James draped all over Derrick Rose during last year’s Eastern Conference Finals.

The typical answer for what the Bulls need most is a complimentary scorer for Rose. As the shot clock ticks down, an added threat that can create his own shot would take the Bulls’ offense to a level they can’t quite reach now. But trading for Howard has also been discussed since before the season began, to the point where Rose is tired of the talk. Even if the possibility seems more and more remote, Thursday night was a chance for the Bulls to get an impression of what could be as the trade deadline nears.

Dwight Howard. Howard’s ability to completely dominate a game while occasionally seeming disinterested in it never gets easier to understand. Howard spent the entire first half abusing Joakim Noah whenever the Magic fed him in the post. A reputable post defender (a status that has steadily declined much of this season), Noah was helpless when left alone on the block as Howard went 7-9 with 19 points and 10 rebounds before the break. When Howard decided he was tired of scoring, he was getting the rest of his teammates open looks from three-point range, where the Magic went a silly 6-8 in the first quarter.

On the defensive end, Howard controlled the opposing offense in the same understated way he often does. When Rose is at his most effective (like he was in the 30-point show he put on against Milwaukee the night before), he is getting to the rim and creating easy efficient shots for himself and teammates. Last night, Rose and the rest of his teammates spent much of the first two quarters missing 18-foot jump shots.

Play(s) of the Night

Howard’s most impressive two-possession stretch probably didn’t make the final highlights, and one of the plays didn’t even count, but it was a glimpse of just how easy the game comes to him. On the defensive end, Howard goaltended a Taj Gibson floater into the 15th row before moving to the other end, getting the ball on the block and managing to get a shot off the glass and in with Omer Asik hanging on him. Because he squanders it pretty often, it’s easy to forget how he doesn’t exist on the same physical plane as just about everyone else in the league.

Derrick Rose didn’t attempt his first free throw until the 5:46 mark of the fourth quarter. “Weird” might not be the right word (Rose attempted only two less free throws than he averages per game), but it was indicative of how Howard affected the Bulls offense. Fourteen of Rose’s 30 points against Milwaukee came from the free-throw line, and because of his struggles as a jump shooter, getting to the line (where he shoots 82 percent) early and often is a way for him to get his points effectively.

Both of these teams (and just about everyone else) need Dwight Howard. When he gives a shit, there is one player in the league that’s more valuable, and there were again stretches last night where that was apparent. Obviously, knowing that he’ll sign an extension is the key factor in any trade, but if that were a certainty, or even a likelihood negotiated beforehand, no team is strong enough right now to remain idle if Howard is available. For the Bulls, that means a package including anyone but Rose. And for Orlando, that might mean that almost no package is enough.