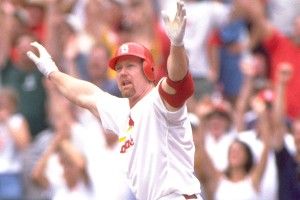 Here’s a column I wrote about the Baseball Hall of Fame in January 2007 for ESPN The Magazine, back when I still cared who made it. Six years later, I find myself saying, “I don’t even care anymore, the place has been ruined.” Alas.

• When a painful strike canceled the 1994 World Series and nearly killed the sport, two events got people caring again: Cal Ripken’s breaking Lou Gehrig’s consecutive-games record in 1995, and McGwire’s and Sosa’s battling for Maris’ record three years later. Watch the end of 61* sometime, or reread Mike Lupica’s gushing book, Summer of ’98. (Note: Lupica now argues that Big Mac doesn’t belong in the Hall. He never says anything about returning the profits from his book, however.) The home run chase meant something back then. And by the way, when it was going on, we all chose to overlook the fact that McGwire was a can of green paint away from being the Incredible Hulk and that Sosa looked like he was developing a second jaw. Let’s not forget that.

• When McGwire finally broke Maris’ record, his subsequent handshake-hug with Sosa was the single most awkward sports-related moment since Apollo and Rocky embraced on the beach in Rocky III. That’s gotta count for something.

Vince Wilfork's Family Has a Robot That Cleans Their House