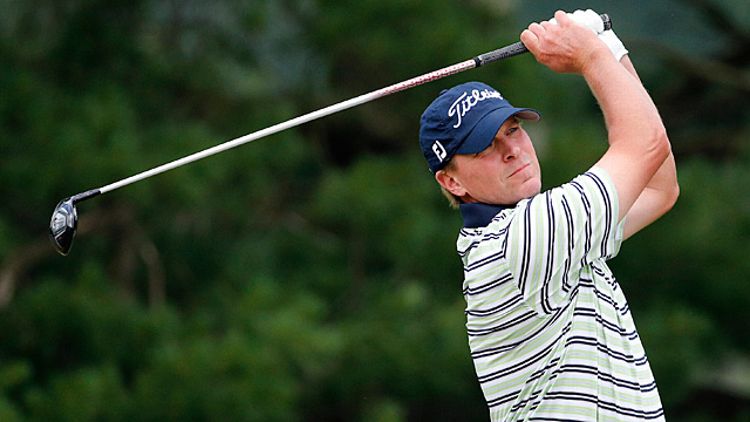 Today, 156 golfers from all over the world stepped on the first tee at Muirfield with hopes of winning the third major championship of the year. Somewhere in the back of their minds, they’ll also be hoping to avoid what Steve Stricker did on the last day of the previous major. It was something that professional golfers rarely do, especially when there’s a camera trained on them. On the second hole of the final round of the U.S. Open, Stricker hit an honest-to-god shank.

This was a surprise for a number of reasons. In a sport that’s already vanilla, Stricker warrants nary a sprinkle. He’s a steady player who doesn’t hit the ball a long way or take a lot of Mickelsonian chances on the course. He was also hitting a shot, a layup, that, with its shared basketball terminology, suggests the kind of thing that should come easy for a pro.

Stricker isn’t the first PGA Tour player to hit a televised shank. Hunter Mahan did it in a tournament he went on to win. Webb Simpson, last year’s U.S. Open champion, has done it twice. (And yes, Tiger has hit one too.) But if you were just to judge from the title of a number of YouTube videos (which is admittedly a terrible way to judge most things), you’d think the shank was a lot more common than it actually is.

Golf is a sport with a rich vernacular, especially when it comes to mishits. In basketball, for example, you can only really do two bad things with a shot, and neither of the terms used to describe them — a brick or an airball — are very creative. Golf isn’t like that. It has terms so divorced from their original meaning that you actually have to reverse-engineer them to understand what they’re describing. Example: You hit a chip shot that was fat. Which means you took a large chunk out of the ground. And what else is chunky? Congratulations! You now know the origin of the term “chili dip.”

Shank has a very specific meaning. It’s when a golfer hits the ball with any part of the club other than the face. This is hard to do, since a golf club doesn’t have a lot of parts. The hosel is the main offender. It’s that Tootsie Roll–thick piece of steel that connects the face to the shaft, and it’s also the source of the shank’s best nickname, a “hosel rocket.”

So knowing that shank means one thing and one thing only, why has it become the default term for a bad shot? Witness this video from Golfing World, a site that should know better.

And this poor guy, who’s referred to as the “worst golfer in NJ,” is correct when he says he “chunked the hell out of it.” Even though the title says he “shanks again.” (NSFW language and NFL on FOX theme music alert.)

Why the constant mislabeling? Why say “shank” when the shot was anything but? Here’s a theory. Listen to the way announcer Nick Faldo delicately talks about Mahan’s wayward hit in the :58 to 1:08 window.

What Voldemort was to Hogwarts, “shank” is to golf. Mention the word and you risk bringing it to life. It’s some combination of four-letter swear and shaman’s curse. And because it holds this power, people abuse it in order to imbue merely bad shots with an extra level of significance.

They don’t need to, though. Golf already has enough words to describe all the different types of bad shots the world’s best professionals will be avoiding this weekend at the British Open. It also has another that comes in handy during those rare moments when a pro like Stricker actually does hit a shank: Fore!