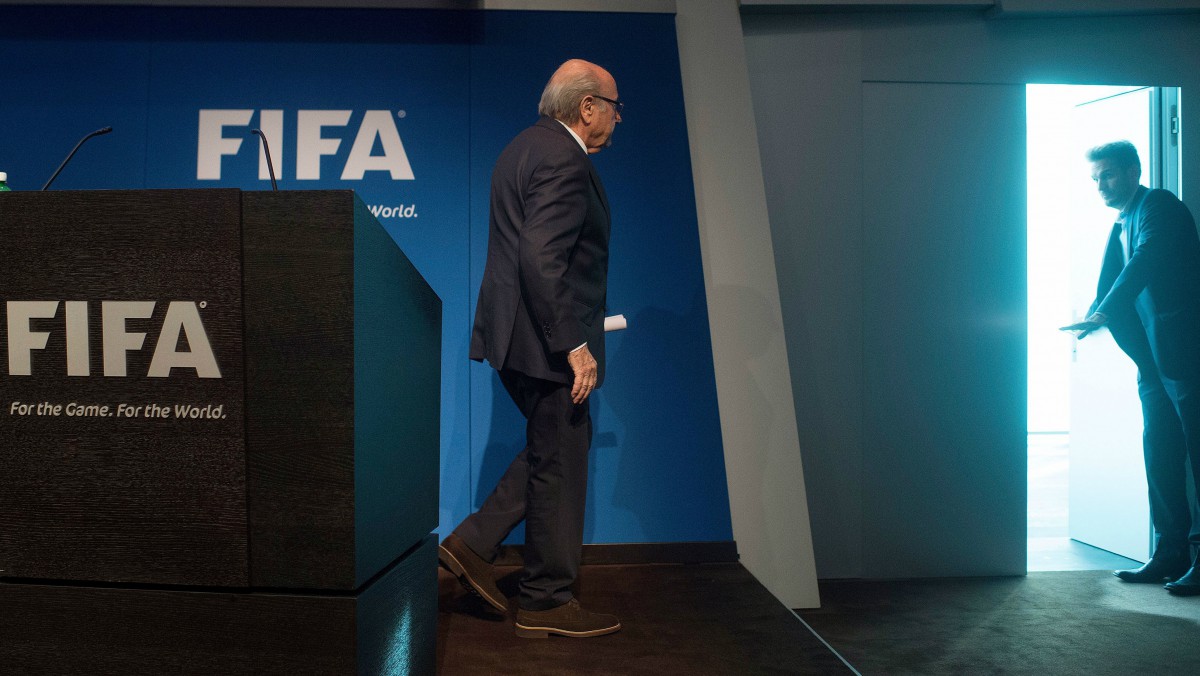 Yesterday, Sepp Blatter resigned as president of FIFA. It would be easy and cheap to gloat about this; it would also be fun, so let’s do it. Blatter’s reign of merry larceny had seemed like it would go on forever. He’d been reelected for a fifth term only the previous week, despite the blinking neon elephant of a U.S.-led corruption investigation that resulted in the arrests of several powerful FIFA officials two days before the election. He’d been widely loathed and tangled in scandal from literally the moment he rose to power in 1998, when he refused to address rumors that his Qatari backers paid $50,000 for votes on his behalf. He always seemed to enjoy it, as though winking at critics and dancing around accusations was a hobby he tackled with zest. It gave his charm a little sparkle of superiority. It was one of the things that made him so pink.

He seemed not just untouchable, but like the kind of person who delights in flaunting how close he always is to being touched. Explosive indictments? He’d just pretend to welcome them, in the interest of making football a better, cleaner place. The rapid unraveling of a cover story about a $10 million bribe involving his closest ally? You assumed he’d do a little shimmy, throw a fresh handful of aides under the bus, and emerge as spotless and simpering as ever — the way he’d done when the collapse of International Sports and Leisure exposed holes in FIFA’s books, the way he’d done his entire career. Instead, we got a hasty press conference, a resignation speech, and a pretty stunning confirmation of the chaos into which U.S. Attorney General Loretta Lynch’s investigation has thrown the weirdly smooth-jazz-filled back rooms of global soccer.

I mean, consider. This is the guy who has suddenly decided to take the dignified way out: This is the man who, upon sober reflection, feels that his presence has become a distraction in the all-important quest for reform:

This is the responsible steward of football who would rather sacrifice his own position than see the game he loves besmirched by controversy:

That’s what the Lynch investigation has accomplished. A week ago, Blatter was riding the silk and rosewater train to a happy retirement in about 2618. Now? It’s as if Richard Nixon finally got caught after his 1,500th hotel burglary. It’s as if Vlad the Impaler stood in front of a blue backdrop, somberly grimaced into a microphone, and said, “After a great deal of thought, I have decided to turn my anti-impaling campaign over to others.”

This is, in other words, an incredible, historic moment for soccer, one with the potential to delete the corrupt programming that’s been whirring away in FIFA’s firmware since Joao Havelange saw his first pair of Adidas. But it could just as easily end up as a merely cosmetic tweak, since the problem at FIFA was never Blatter per se but the system Blatter helped to devise. What we don’t know right now drastically exceeds what we do know, so here’s a list of some of the major questions — and some provisional answers — before the special meeting to elect a new FIFA president.

1. This fixes everything, right?

Guess what. It doesn’t. Taking down Blatter was always a necessary condition for FIFA reform, since he held immense personal influence and was devoted to a pretty clearly deceptive strategy of embracing reform rhetorically while thwarting it practically. But Blatter didn’t single-handedly create the conditions for corruption within FIFA. He was only a dewy lieutenant when Havelange do-we-still-have-to-say-allegedly started trading World Cup marketing rights for bribes that he’d then kick down to voters who supported his presidency.1 Any Blatter replacement would start out on the point of the same pyramid; unless the system itself is drastically overhauled, it would be crazy to expect different results.

That’s why, as great and worthy of massive celebratory drinking as Blatter’s resignation is, its abruptness and opacity is still a little worrying. If Blatter is somehow being forced out by status quo cronies who think sacrificing him will satisfy the media and let the con keep rolling, then all we’ll get is more pretend reform and no real change. Getting rid of Blatter makes it possible to fix FIFA. It doesn’t mean FIFA is fixed.

As it stands now, FIFA isn’t an organization plagued by corrupt members. FIFA itself is corrupt. Rules are unclear and inconsistently enforced; FIFA operated without a written code of ethics until (get ready for this) 2004, and when one was finally adopted, it was mostly used as a weapon against anyone who challenged Blatter.2 The all-powerful Executive Committee operates largely in the dark, with little in the way of accountability or oversight. Every member country has one vote — the Seychelles has as much power as China — and the representatives are undemocratically appointed, often by governments that see the posts as sinecures and have no real interest in bettering soccer for their constituents.

Throw obscene gobs of money into this scenario and you get obvious problems. Any president who can keep 105 voters happy can basically rule forever, and there are a lot of tiny countries, bad governments, and opportunistic sports executives in the world. At the same time, with no real supervision, there’s nothing to prevent corporations that want their names attached to the World Cup and rich countries that want to host it from flinging sacks of diamonds at ExCo members. And there’s no shortage of amoral companies and glory-craving world powers, either.

FIFA isn’t going to work the way it’s supposed to until:

That’s a partial list, but it shows you what astoundingly bad shape FIFA is in now. A lot has to happen before Blatter’s resignation can mean what it should. And thanks to the law of conservation of momentum of mad cash, it will happen only if all the pressure currently on FIFA — from the law, from the public, from Brad Paisley — doesn’t relent just because Blatter is finished.

3. Is Blatter even finished?

Ha! Who knows? Probably? He’s not actually leaving his post for months, because an ancient FIFA bylaw that he found in his sock drawer yesterday morning stipulates that members need four months’ notice before a meeting.3 I don’t see how he could revoke his own resignation, but then, he’s revoked his own promises not to run for reelection in the past, so anything’s possible. He’s like an action-movie villain; you can’t trust he’s dead just because he’s motionless. You pretty much need to see the exploding hot-air balloon fall directly into the lava.

4. Isn’t this whole thing just a temper tantrum because the U.S. didn’t get the World Cup?

Yeah, no. It’s a cunning PR move to turn the corruption investigation into an Arrogant Westerners vs. The Rest of the World story, as Blatter and some of the indicted FIFA execs have tried to do (or at least it’s cunning if you don’t use The Onion to do it). And it’s got a vague air of plausibility because in the years before the Havelange-Blatter revolution, FIFA really was a club of gentlemen-colonialists. They resisted the expansion of the game into Africa and Asia, presumably while stroking drooping white mustaches and wearing, like, pith helmets. The admission of many previously excluded places into the world soccer community is one of the few good things to happen under Blatter’s watch, and it came with a necessary diminution of European and North American influence. So it’s easy to interpret the hostility of those regions to Blatter as purely self-interested. And maybe it even is.

But Blatter’s support from smaller and less traditionally empire-having countries within FIFA is equally easy to misread. Blatter is supported by the state-sponsored football associations of these countries, not by the citizens. There is a yawning leap between winning the vote of an FA and actually working to improve the game for fans and players in that FA’s home nation, which is why many of those nations are full of people who despise FIFA as much as anyone in Cleveland does.

Hosting the World Cup worked out really well for stadium developers in South Africa. It worked out marginally less so for the people who were taxed to build the stadiums and then priced out of going to games. Blatter’s support for countries outside the first world may be heartfelt for all I know; functionally, all it’s done is create more vulnerable populations for the soccer machine to exploit. This is not a conflict between traditional powers and the developing world or whatever;4 it’s a conflict between people who want the World Cup to be whatever maximum version of almost-fair is possible in real life and people who like their hundred-dollar bills strapped, not rubber-banded, if you please.

5. Yeah, but aren’t all the good guys here Westerners and most of the bad guys non-Westerners? How’s that fair?

Well, Blatter is Swiss, and of all the disgraced FIFA executives with Polaroids on this wall chart, it’s an American, Chuck Blazer, who is by far the most colorfully appalling.5 Still, I see what you’re saying. There’s a tone of Americo/Euro-centric presumption that sometimes creeps into reports on this story, and it will be maddening if the result of that tone is to polarize the narrative along geopolitical lines and create sympathy for FIFA where none should exist.

It’s funny; the furor over alleged World Cup hosting-related bribery has kind of drowned out all the alleged TV-rights and product-sponsorship bribery. That in itself may be reflective of a Western bias. But rest assured, autocratic oil-rich governments aren’t the only culprits whose bad qualities FIFA has encouraged. Burlap dollar-bill sacks know no nationality. Big capitalist corporations are absolutely terrible too.6

6. Is Michel Platini the hero who will save us from all this?

That’s the enemy-of-my-enemy logic that we’re going to hear from the Platini camp, since Platini, the president of UEFA, is Blatter’s biggest rival. But remember what I was just saying about bad news coming from all over? Platini, a former midfield great for France, allegedly was given a Picasso from Vladimir Putin in return for supporting Russia’s 2018 World Cup bid (he denies it, but another FIFA executive mentioned in the same report admits to receiving a painting under similar circumstances). And he’s acknowledged voting for Qatar. Platini might well be an improvement over Blatter, but at this point his intra-FIFA profile is closer to cynical realism than anything else. I wouldn’t cry if he retired too.

7. Will this lead to a new vote for the hosting rights to the 2022 World Cup?

It’s impossible to say. It will certainly lead to new calls for one. There are overwhelmingly good reasons to hold one. The Swiss have now opened a new investigation into the bid process. We’ll see.

8. What the hell made Blatter resign when he did?

This is a good question, and of course at this point we have no idea. So probably it was principled idealism. Look, it was either principled idealism or that someone got to him, for the first time, with something he didn’t think he could wink out of existence. One of those two things. So, I mean … clearly idealism, right? Wait, where are you going? Come back!

9. What’s the best way to say goodbye to him after nearly 17 years as president of FIFA?

Why, the same way he’d say goodbye, of course!

So, About That FIFA Job: Some Possible Sepp Blatter Replacements

'The Jonah Keri Podcast': Kiley McDaniel on the MLB Draft and Michael Silverman on the Red Sox