The Men Behind the Curtain: Inside FIFA’s Sinister (and Pretty Entertaining!) Presidential Race 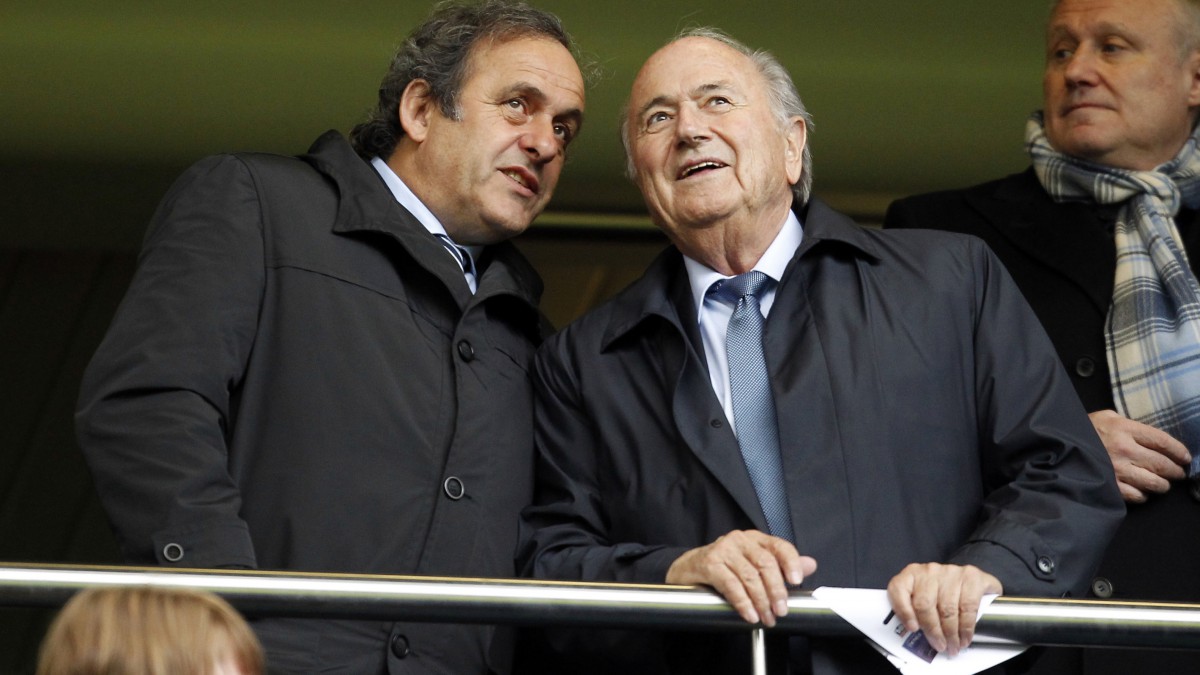 Let’s be clear up front: Sepp Blatter is never going to lose a FIFA presidential election. Never. He’s not going to lose the one in May. He’s not going to lose in 2019, if he decides to run — which looks unlikely, but then, we said the same thing four years ago, back when he, you know, promised never to run again if he was reelected. He’s running again, and he’s going to win again, too. If he wants to rule FIFA forever, it’s hard to imagine what could stop him. Get ready for the debate about whom the moon of Ganymede bribed to host the 2480 World Cup.1

Blatter is loathed by soccer fans. Within the spectacularly venal and untrustworthy community of global football administrators, he’s considered especially slippery; ethically, he’s an orc at a goblin fight. He’s the public face of an organization that has spent the last several years air-running Wile E. Coyote–style over the 1,000-yard drop of a massive corruption scandal. None of this makes the slightest difference to his hold on power, because Blatter has spent his entire career transforming FIFA, at the structural level, into a giant machine for reelecting him — I mean him personally, Sepp Blatter.

To become the president of FIFA, a candidate needs 105 votes from the 209 national soccer associations that govern the sport. In the same way that Roger Goodell works for NFL owners, not NFL fans, Blatter is beholden for his position only to this handful of voters. Every other human being on the planet could want to stick a pitchfork in him; if 105 FIFA electors say he’s their prom king, he wins prom. This voting structure means that sustaining a power base within FIFA tends to have less to do with presenting a compelling vision of the overall good of the sport than with catering to needs on a very local level. The head of the FA from the imaginary island nation of Kopopo, which sounds like a country Blatter would invent, doesn’t care which candidate promotes the most transparent World Cup bidding process. He cares who funnels the most development money to the scruffy pitches of Lazarde (the Kopopoan capital; Sepp Blatter has definitely written self-fanfic about this).

The localism of FIFA politics creates a situation in which corruption can flourish — as you’d imagine, the term “development money” there can be read in a few different ways; stacked, if you will, in a few different conceptual briefcases. It also creates a situation in which a sitting FIFA president who plays his cards right can build an essentially invulnerable bloc of support among smaller countries without ever addressing a big issue. Keep the money flowing to upper bureaucrats in nations that will never qualify for the World Cup and you’ll face no consequences for whatever goes on higher up. Your executive committee members can sell their World Cup bid votes and the builders of your stadiums can steal public funds and the riot police in your partner nations can bulldoze schools. And you? You’re a shiny diamond, as long as the money keeps circulating.2

The engineering of this machine might have begun with Blatter’s predecessor, João Havelange, who presided over the entry into FIFA of pin-dot countries like Montserrat, population 4,900. But its precision calibration has been Blatter’s life’s work. For this May’s election, he has already received the support of the African confederation, which represents 53 votes. He almost certainly has enough votes locked up to win by avalanche numbers — and the campaign has only just started, and this is the same Blatter who recently botched the release of the corruption report he himself commissioned. He can’t even do Orwell right, and he’s functionally untouchable.

How would you get rid of him? You could hit him with an ethics case — but he controls the ethics committee; the only people who are ever found guilty are his enemies. You could start a sponsor revolt — but soccer is just too popular, even if there are occasionally promising signs. You could change the form of the elections — but he controls the bylaws. He may look like a twee gnome trotting away from a helicopter, but as far as world soccer is concerned, he’s the weather.3 The most you can do is hope to wait him out.

If there’s a silver lining for long-suffering fans of backstage FIFA infighting, it’s that fate has finally given Blatter an enemy worthy of him — not an enemy with a chance to win, because that’s not in the math here, but one who’s at least got some moves. I’m not talking about any of Blatter’s three sacrificial opponents in May’s election. I’m talking about the glum-faced French civil servant who’s using them as puppet candidates in an attempt to weaken Blatter’s position — the ex-great midfielder and current president of UEFA, Michel Platini.

I apologize in advance if bureaucratic procedural maneuvering is not your jam; still, though, this is pretty elegant. The one cool thing about Blatter and Havelange’s buy-off-small-countries strategy of FIFA stewardship was that it effectively disenfranchised the big European powers that had run FIFA as a kind of colonialist old-boy’s club since time immemorial. This was something that needed to happen; the new wave might have replaced exclusionary elitism with an exploitative pseudo-populism that ultimately proved far more destructive, but it was still funny to see, say, England react to having no say in the game.4 The frustrated European old guard has served as a fairly steady protest bloc against Blatter over the years. But it hasn’t been able to put together the votes to force him out.

Platini wants to change that. He’s been quietly jockeying for power against Blatter for years; if he’s not necessarily a preferable alternative — he’s widely seen as more responsible for the Qatar debacle than Blatter is — he’s at least an alternative, and he has played a shrewd and unflappable long game. When he decided not to run against Blatter this year, it briefly looked as though Sepp would enjoy a second straight unopposed reelection.

Not so fast! Platini decided not to run himself. But behind the scenes, he started arranging election bids for other candidates: Michael van Praag, the former Ajax chairman and current head of the Dutch FA, and a longtime critic of Blatter. Prince Ali bin al-Hussein, a FIFA vice-president who is the son of the late king of Jordan. Most spectacularly, Luís Figo, the retired Portuguese winger who won the Ballon d’Or in 2000; Figo announced his entry into the campaign just 24 hours before the deadline, ensuring max press coverage due to the surprise.

Platini didn’t openly acknowledge that he was pulling these candidates’ strings. But the signs were everywhere. To enter a FIFA presidential race, you have to have the backing of five member FAs. Someone invisibly arranged for each of the three candidates to have non-overlapping support. Someone got them to coordinate their messages: reform, credibility, how FIFA is perceived around the world. Would-be FIFA presidents who hadn’t made the five-vote cut started complaining in the press about a mysterious someone running “proxy candidates” to fight their battles for them. (This was from the former French diplomat Jerome Champagne, who I really wish had made it into the election so I could write “Jerome Champagne” as often as possible.)

At the risk of sounding overly enthusiastic about what’s essentially a really good Model U.N. gambit, this is an ingenious move by Platini. Having three candidates in the race effectively triples his message’s reach, while also amplifying the perception that there’s a surge of opposition against Blatter. Splitting his own side’s vote staves off the impression that he’s a puppet master — even though it actually makes him a more diabolical one — and creates enough chaos that who knows what will happen? It’s expected that not long before the election, two of his candidates will drop out and throw their support to whoever looks strongest. If they’ve nibbled at Sepp’s support in the meantime … well, have you got a better plan for achieving the impossible?

Best of all, from behind Platini’s schemingly tented fingers: The plan leaves the Frenchman free to run in 2019 against a presumably Blatter-less field without having squandered his prestige in a losing campaign this year. Van Praag has even publicly promised not to run for reelection if he somehow manages to win. Those sorts of promises aren’t worth the sponsor-logo stationery they’re printed on in FIFA politics, but this one at least suggests what Platini’s endgame might be. Land some body blows on the old man, gong him off the stage, then sweep in as the undefeated reformist/folk hero the age has been clamoring for at the earliest possible opportunity.

This all seems a long way from athletes in colorful shirts kicking a ball around a field, and it is. Like it or not, it’s also an integral part of the reality of modern soccer. It is simply the case that huge swings of destiny — for pros, amateurs, and fans; for communities lucky or unlucky enough to fall under the FIFA klieg lights — turn on the distribution of FIFA’s 1/32nd of a cent from your gas-station Coke Zero.5 Barring some sort of colossally unlooked-for messiah turn from Luís Figo, world soccer is going to remain a shadow-corporate shitshow for the foreseeable future, because everyone is making too much money and because the structural changes that would bring order to FIFA (and what would those be, exactly?) are nowhere on the horizon. At least the games are still good, right? I mean the ones on the pitch and also the ones in the offices.

Curry, Korver, and the Raiders of the Arc: A 3-Point Contest Preview